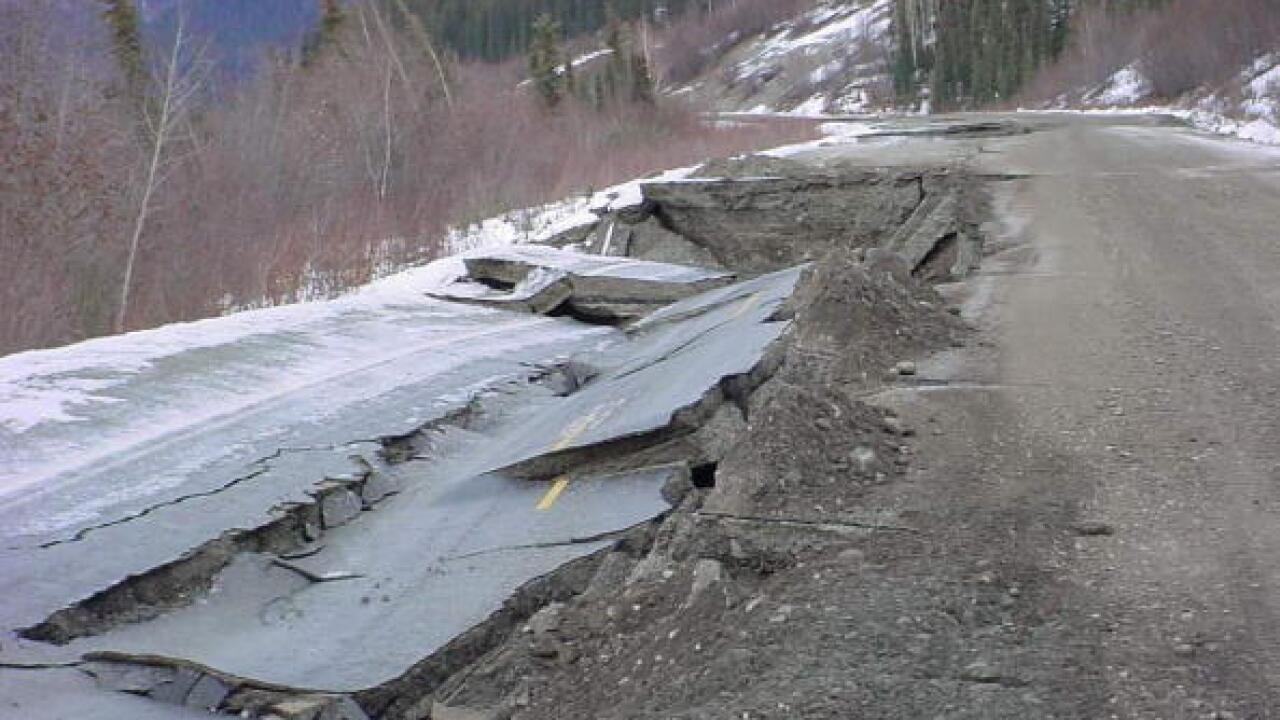 Getty Images/Getty Images
MENTASTA, ALASKA - NOVEMBER 4: One of the large cracks on the Tok Cutoff Highway, caused by an 7.9 magnitude earthquake on November 3 that rocked a sparsely populated area of interior Alaska, is seen November 4, 2002 near Mentasta, Alaska. The earthquake, one of the most powerful earthquakes ever recorded in the United States, knocked out some of the pipelines supports forcing the flow of oil to be shut down. (Photo by Alaska Department of Transportation/Getty Images)

ANCHORAGE, Alaska (AP) — Life was beginning to return to normal Monday in Alaska following the powerful earthquake near Anchorage, but people nervous about aftershocks were still grappling with damage that closed public buildings and schools, clogged roads and knocked homes off foundations.

Some residents went back to work. But state transportation officials again urged people who live north and south of Anchorage to take the day off or work from home to reduce traffic.

"We don't want the commute to be frustrating because people will experience delays," she said.

Residents still jittery from the 7.0 quake on Friday have been rattled even further by more than 1,700 aftershocks. A dozen have had magnitudes of 4.5 or greater.

"Anything that moves, you're on your last nerve," said Anchorage resident Lyn Matthews, whose home sustained substantial structural damage, including a sunken foundation.

Matthews, who was back at work at a chiropractor's office, and her husband have no earthquake insurance.

There were no reports of deaths, serious injuries or widespread catastrophic damage in the state with strict building codes implemented after a 1964 earthquake with a magnitude of 9.2 — the second most powerful of any quake ever recorded.

No outbreaks of disease or other major health problems have been reported.

Still, federal officials declared a public health emergency on Monday, saying the action will ensure that Medicaid funds continue to be issued despite the temporary closure of offices. Mental health aid is also available for people being stressed by the disaster.

Earthquake forecasts cited a 4 percent chance of another earthquake with a magnitude of 7.0 or greater in the first week after the first quake.

"The chance is very small, but it's not impossible," U.S. Geological Survey Geophysicist Paul Caruso said.

The federal courthouse in Anchorage was among structures that remained closed. Officials said the U.S. District Court and the attached federal building in Anchorage will be closed at least through Thursday following a preliminary evaluation by the General Services Administration.

GSA spokesman Chad Hutson said boilers in the federal building were leaking, leaving it without heat.

The nearby Historic Federal Building, where the bankruptcy court is located, also remained closed. Officials said it will be ready to reopen once minor cleanup is complete.

Schools have been closed until Dec. 10, which should also reduce traffic. An elementary school in the Anchorage suburb of Eagle River has been deemed unsafe to occupy, while multiple other campuses in the region are undergoing repairs and cleanup, according to the Anchorage School District.

A middle school in the small town of Houston north of Anchorage likely will remain closed through the year.

The supply chain of food and other goods delivered to the Port of Anchorage from the Lower 48 has not been disrupted.

About 90 percent of all the goods sold in Alaska are delivered to the Port of Anchorage, where officials have completed a preliminary damage assessment. There were some structural issues with some trestles, but nothing that should impede operations, according to Municipal Manager Bill Falsey.