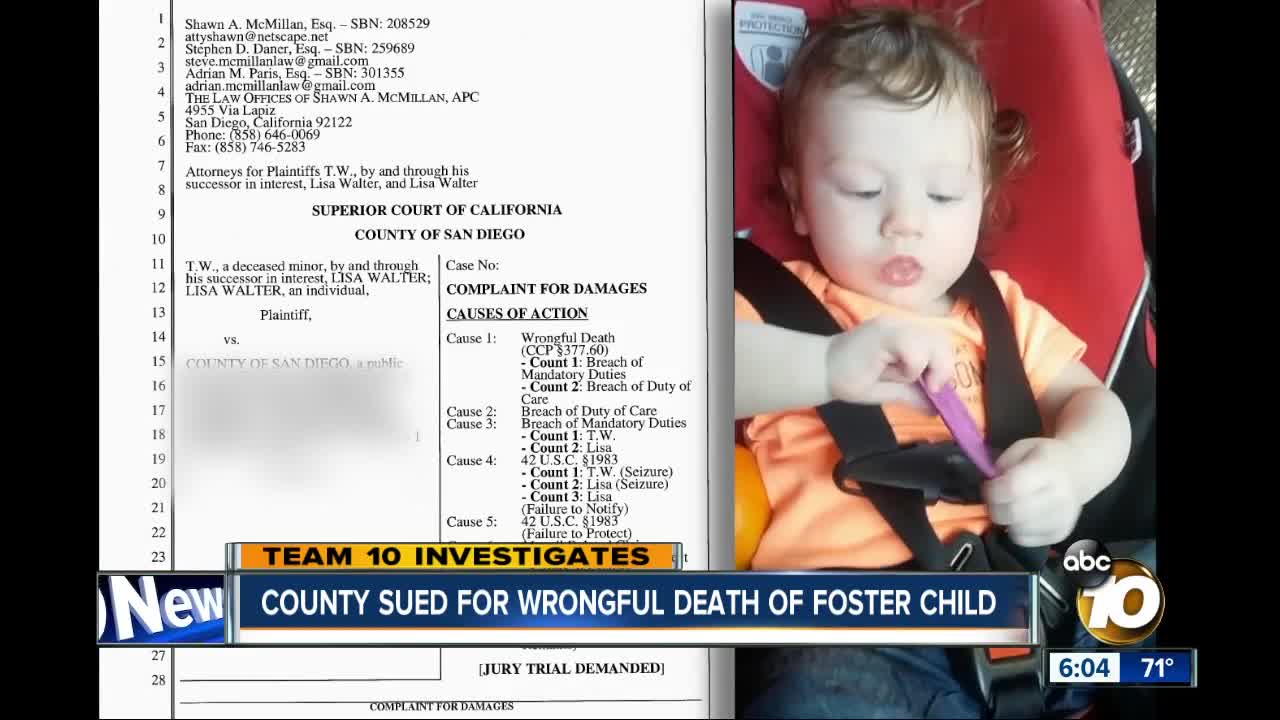 A mother has named San Diego County in a wrongful death lawsuit of her son, Tyler. 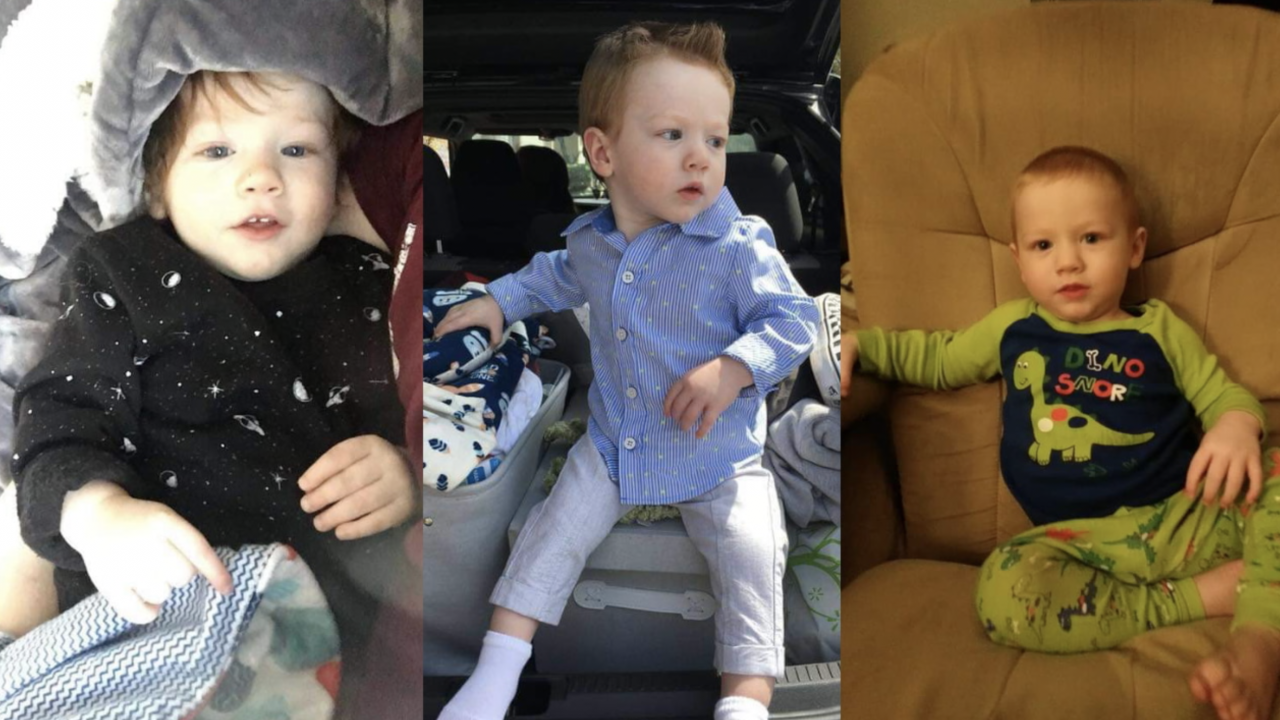 SAN DIEGO (KGTV) - It took just three months for Tyler Walter to turn from a happy and healthy toddler into a dead one while in the care of the County of San Diego, according to a recent lawsuit.

Those are just two of the claims in the lawsuit filed by Tyler's mother, Lisa Walter, against the County of San Diego and several social workers.

Tyler Walter died shortly after being placed with a foster parent. The cause of death listed on his autopsy is blunt head trauma. His body after death, not returned to his mother for burial but cremated, the lawsuit claims.

County social workers failed multiple times in their duty to monitor Tyler's living condition and update his mother, and the Juvenile Court, regarding the dramatic change in living conditions of his county-approved caregiver, according to the lawsuit.

Tyler was taken from his mother after sheriff's deputies found drugs at the house where she was staying.

Tyler's mother was charged with child abuse, possession of a controlled substance, and possession of paraphernalia used for narcotics. According to the San Diego County District Attorney's Office, Walter pled guilty to all charges and is currently going through a drug court program.

After Walter's arrest, a social worker told her, "Tyler would be out of Lisa's care for a minimum of six months," the lawsuit stated. The lawsuit explained the social worker said that no matter the circumstances, she never returns any child earlier than six months and voiced only contempt for Walter.

Shortly after Tyler's mother was arrested, his 19-year-old cousin became his foster mother in July 2018, the investigators report in Tyler's autopsy stated. 10News is not identifying the family member because she hasn't been accused of anything.

Tyler's cousin lived in a home 100 miles away in Long Beach.

"The placement they put him in was a home daycare center with a 19-year-old and her partner," said Walter's attorney Shawn McMillan.

RELATED: Mother claims San Diego County was negligent in death of her child while in Foster Care

McMillan said Walter requested that her son be placed with his grandmother, but social workers didn't let that happen.

McMillan explained Walter was trying to reunite with her son and comply with her reunification plan, which included having to participate in regular visitation with him.

According to the lawsuit, "Even the Juvenile Court judge, upon learning of the placement, questioned the defendants' decision and expressed concern that Tyler was placed outside of the County of San Diego."

The lawsuit states, the defendants used Tyler's "remote placement as a punishment tool – to impose a huge burden on Lisa in order for her to see her own child. Their intent was to make visitation so extremely difficult and burdensome on Lisa, that she would either fail or give up."

The lawsuit also accused the county and social workers of failing to provide any means for Tyler to receive or pay for medical care while in his cousin's care.

According to Tyler's autopsy, he was in and out of the hospital in the weeks leading up to his death. He was vomiting and wouldn't eat.

The lawsuit stated when his caregiver took him to one of his appointments, she was turned away because social workers failed to provide her with, or set up Tyler's medical insurance program.

It also claimed his caregiver repeatedly attempted to contact social workers but received no response.

"As a matter of law, regulation, procedure, and policy Tyler’s medical insurance was required to be in place and fully functional before Defendants, and each of them, dumped Tyler into nineteen-year-old's care. But defendants failed to do so," the lawsuit stated.

According to the lawsuit, Tyler's cousin and her girlfriend were kicked out of the home where they were living about a week before he died.

The lawsuit stated they were homeless and living out of a car in a park in Long Beach.

"I am not clear under what set of circumstances in what universe that would be an appropriate placement," McMillan said.

According to his autopsy report, Tyler was fussy and didn't eat much the day he died.

Tyler's foster mother and another adult drove Tyler to a park not far from where they were staying. They parked, unbuckled Tyler from his car seat, and one of the adults smoked marijuana, the autopsy stated.

The report stated that a short time later, they noticed Tyler was, "slumped completely over with his entire top half folded in half. His back seemed splotchy. [One of the adults] got him out and noticed he was not breathing. She took him to the table and began screaming for help. CPR was performed and when the decedent was turned over, dark fluid and mucus came out of the decedent."

The report stated paramedics arrived at the scene and transported Tyler, but he was pronounced dead at the hospital.

The official cause of death listed on his autopsy report is blunt head trauma.

The autopsy report showed Tyler had a skull fracture, bruises on the left and right side of his forehead, discoloration behind his ear, a bruise on his cheek, and a cut under his chin.

The medical examiner listed the manner of death as undetermined.

According to the lawsuit, Tyler's mother was in shock following news of his death. It stated, "Adding further trauma, Lisa was barred from retrieving Tyler’s remains in October of 2018. Importantly, at no point were Lisa's parental rights ever terminated. But the County refused to relinquish Tyler’s body to Lisa. In spite of Lisa's protest, the County gave the body to others."

Tyler's funeral was arranged by the very people whose actions led to his death, the lawsuit claimed. "He was promptly cremated. But, Lisa had wanted Tyler to be buried. Lisa was not even consulted by the County as to the disposition of her son's remains," the lawsuit stated.

The County of San Diego did not respond to our request for a comment on this story.

In a previous story about Tyler Walter's death, a spokesperson wrote, "The safety of children in the County's care is our number one priority. We join in the grieving for this child's passing. This complicated case remains under investigation and we are limited in offering further comment."

10News is not naming the social workers named in the lawsuit.

Tyler’s foster parent also did not respond to requests for a comment on this story.