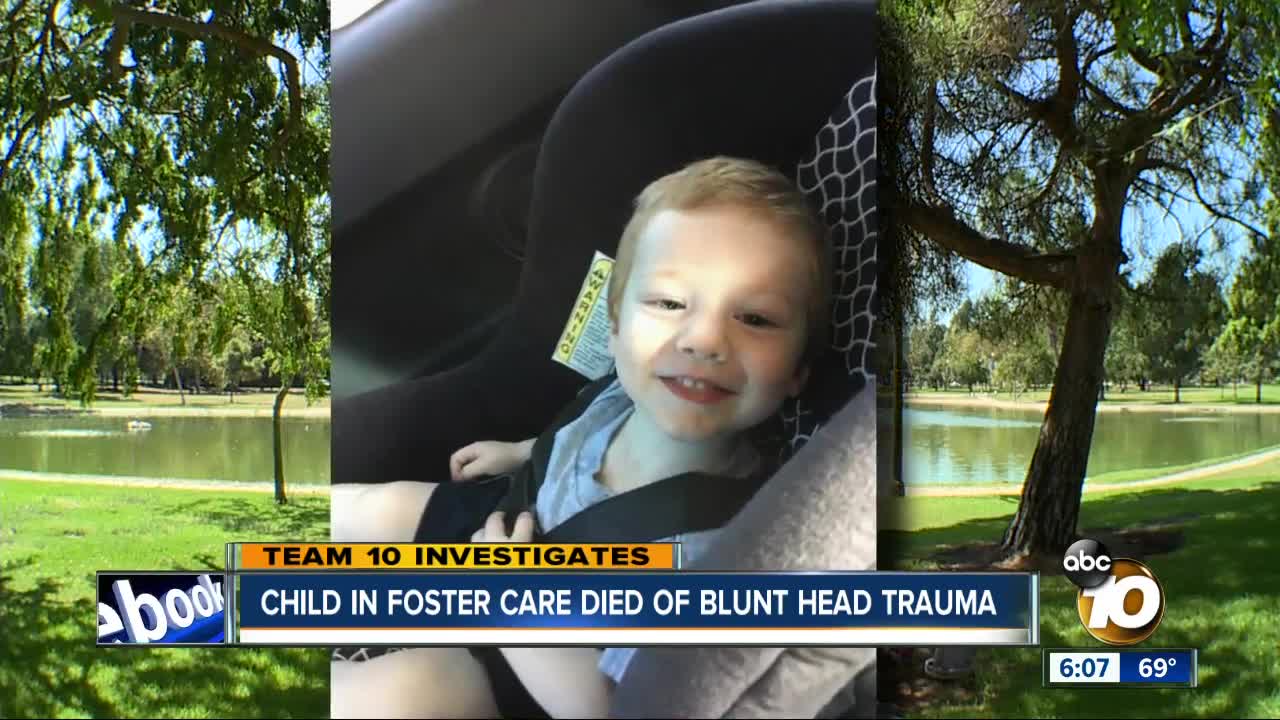 The biological mother of the 22-month-old boy believes the system failed in its duty. Tyler Walter died two months after being placed with a foster parent. 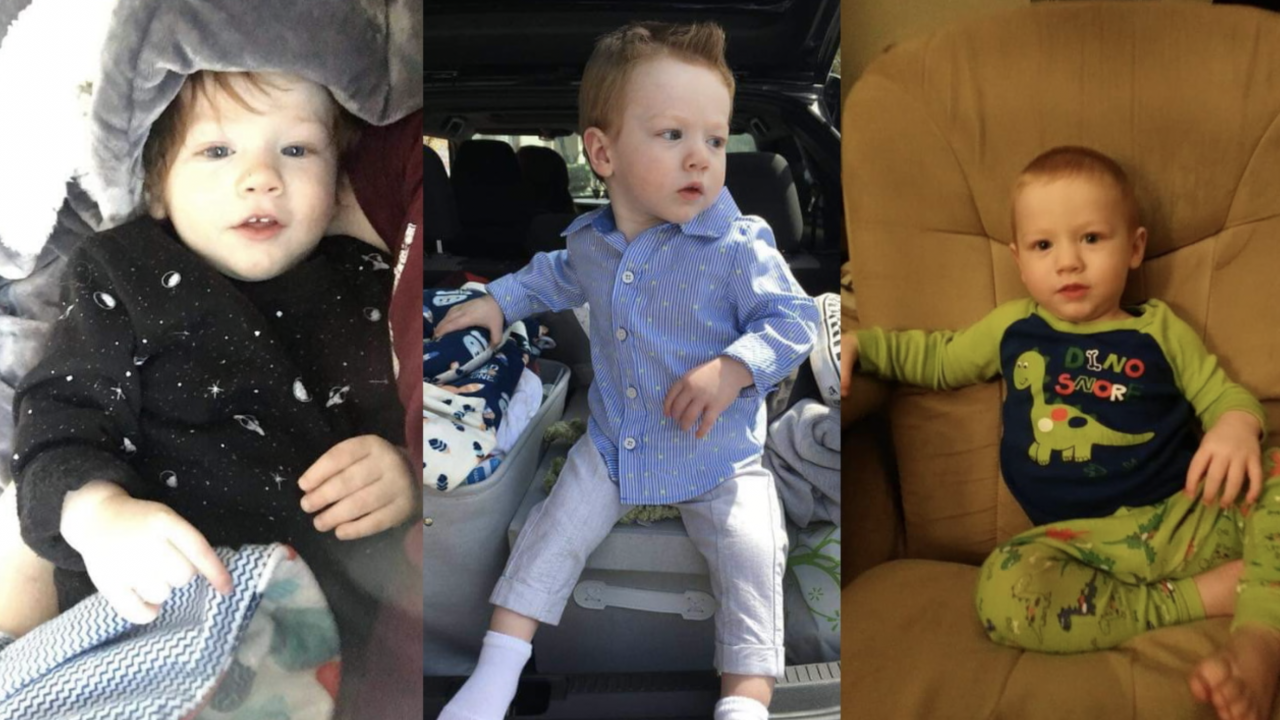 Adults were put in charge of Tyler Walter's life to give him a chance to flourish. Instead, Tyler died before he could reach two.

The biological mother of the 22-month-old boy believes the system failed in its duty. Tyler Walter died two months after being placed with a foster parent.

In a claim filed against the County of San Diego, Lisa Walter stated that her son Tyler, "was healthy when he was in my care he was thriving, he needed his mother and placing him with my 19-year-old niece was negligent."

Tyler Walter died Sept. 22, 2018. The cause of death listed on his autopsy is blunt head trauma.

Tyler James Walter was born at 29 weeks and spent his first 45 days in the newborn intensive care unit or NICU.

According to an investigators narrative in Tyler's autopsy report, he was fed only formula for the first 20 months of his life and was considered malnourished and behind on his milestones when he was taken from his biological mother.

The investigators narrative in the autopsy obtained by 10News is heavily redacted with every name other than Tyler's blacked out. Based on interviews with other sources close to the case, 10News has been able to confirm and identify those individuals involved with Tyler's care.

According to the report, in June of 2018 the residence where his mother was staying was raided and narcotics were found in baby food containers.

Tyler's mother, Lisa Ann Walter, was charged with child abuse, possession of a controlled substance and possession of paraphernalia used for narcotics. According to the San Diego County District Attorney's Office, Walter pled guilty to all charges and is currently going through a drug court program.

Shortly after Tyler's mother was arrested, his cousin became his foster mother in July 2018, the investigators report in Tyler's autopsy stated. 10News is not identifying the family member because she hasn't been accused of anything.

Tyler moved into a home that was also operating as a daycare in the Long Beach area. That's about 100 miles north of San Diego.

According to the investigators report, "he was making much better progress since being placed with her."

The report states Tyler and his foster mother left the residence on Sept. 18, 2018.

According to his autopsy report the day Tyler died he was fussy and didn't eat much.

It stated that on Sept. 22, 2018, Tyler's foster mother and another adult drove Tyler to a park not far from where they were staying.

They parked, unbuckled Tyler from his car seat and one of the adults smoked marijuana.

The report stated that a short time later they noticed Tyler was, "slumped completely over with his entire top half folded in half. His back seemed splotchy. [One of the adults] got him out and noticed he was not breathing. She took him to the table and began screaming for help. CPR was performed and when the decedent was turned over, dark fluid and mucus came out of the decedent."

The report states paramedics arrived at the scene and transported Tyler, but he was pronounced dead at the hospital.

The official cause of death listed on his autopsy report is blunt head trauma.

"Blunt force trauma means that there's injury to the body," explained Dr. Howard Robin, an anatomical and clinical pathologist with no connection to this case. "In this case the injury was to the brain. They found subdural hematomas."

The autopsy report shows Tyler had a skull fracture, bruises on the left and right side of his forehead, discoloration behind his ear, a bruise on his cheek, and a cut under his chin.

The report showed that marijuana was detected in his system.

However, the medical examiner listed the manner of death as undetermined.

"The manner of death was undetermined meaning they were having difficulty determining whether this was an accidental death or if this was at the hands of an adult," Dr. Robin said.

According to his autopsy report, Tyler had been in and out of the hospital in recent weeks; he was vomiting and wouldn't eat. He'd also fallen off a tricycle a few days before he died.

Those are factors the medical examiner noted. The report also states under factors to consider, "non-accidental trauma by an adult should also be considered. This cannot be ruled in or out by autopsy."

The Long Beach Police Department told 10News the investigation into Tyler's death is ongoing. They confirm that through their investigation, officers learned that the child was at the park with relatives when he became unresponsive.

"The autopsy report is troubling," said Professor Robert Fellmeth, executive director of the Center for Public Interest Law and Children's Advocacy Institute at the University of San Diego.

Professor Fellmeth is an expert in child welfare laws. 10News asked him to read Tyler's autopsy report and explain the rules for placing children in foster homes and with relatives acting as foster parents.

"You favor relatives statutorily," Fellmeth said. "You want to favor relatives and we do, but usually we're talking about grandparents or uncles or aunts or sisters or brothers of the parent, that kind of person."

Legal Claim Filed Against the County of San Diego

She wrote, "CWS of San Diego County removed my son and failed to make reasonable efforts to reunify him with me in the best interest of the child."

Team 10 asked the County of San Diego about Tyler's placement and how he ended up with a teenager living two counties away.

Experts tell Team 10 state law requires if a child is placed in another county, then that county needs to know about it.

A spokesperson for the County of San Diego wrote in part, "While we can't comment on this case, in general the County of San Diego Child Welfare Services approves or denies a home for placement of foster children pursuant to Welfare and Institutions Code section 16519.5 and per the guidelines of the California Department of Social Services' Resource Family Approval Written Directives (version 6) [cdss.ca.gov].

10News also asked a spokesperson for Los Angeles County what they knew, when and if there was any agreement.

A spokesperson responded in part, "the Department of Children and Family Services (DCFS) is unable to provide any information at this time. We would continue to refer you to San Diego County."

After weeks of investigating Tyler Walter's death, the County Health and Human Services Agency sent an additional statement before publishing the 10News report. In part, agency officials say the case remains under investigation.

“The safety of children in the County’s care is our number one priority. We join in the grieving for this child’s passing. This complicated case remains under investigation and we are limited in offering further comment," agency officials said.