Copyright 2018 Scripps Media, Inc. All rights reserved. This material may not be published, broadcast, rewritten, or redistributed.
Handout
<p>HAWAII VOLCANOES NATIONAL PARK, HI - MAY 3: In this handout photo provided by the U.S. Geological Survey, ash sprews from the Puu Oo crater on Hawaii's Kilauea volcano on May 3, 2018 in Hawaii Volcanoes National Park. The governor of Hawaii has declared a local state of emergency near the Mount Kilauea volcano after it erupted following a 5.0-magnitude earthquake, forcing the evacuation of nearly 1,700 residents. (Photo by U.S. Geological Survey via Getty Images)</p>
Posted at 4:17 PM, May 04, 2018

PAHOA, Hawaii (KGTV and AP) - A 6.9 earthquake and several other strong quakes shook Hawaii’s Big Island Friday near where a volcanic eruption has forced residents to evacuate.

The U.S. Geological Survey recorded at least seven quakes that measured above a 4.0 magnitude Friday, in addition to smaller tremors. 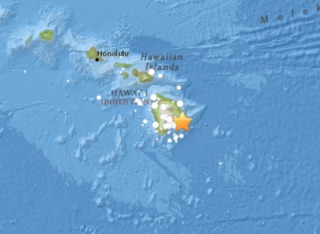 After a week of earthquakes and warning, an eruption began Thursday and continued Friday, with lava spurting from three volcanic vents.

Some residents living near spattering lava in Hawaii said Friday morning they were frustrated that they were not being allowed to go home.

Hawaii County issued a mandatory evacuation order for neighborhoods near the lava flow in the mostly rural Puna district of the Big Island. In addition to the danger from lava, civil defense officials are warning the public about high levels of sulfur dioxide.

Brad Stanfill says the lava is more than three miles (5 kilometers) from his house but he's still not being allowed in. He wants to go home to feed his pets and check on his property. He's concerned about reports of looting.

One woman angrily told police guarding Leilani Estates she was going into the area and they couldn't arrest her. She stormed past the police unopposed.

The Hawaii National Guard was activated Friday, with 70 soldiers and airmen assisting those affected by volcanic activity. The troops will patrol and assist with evacuations and security.