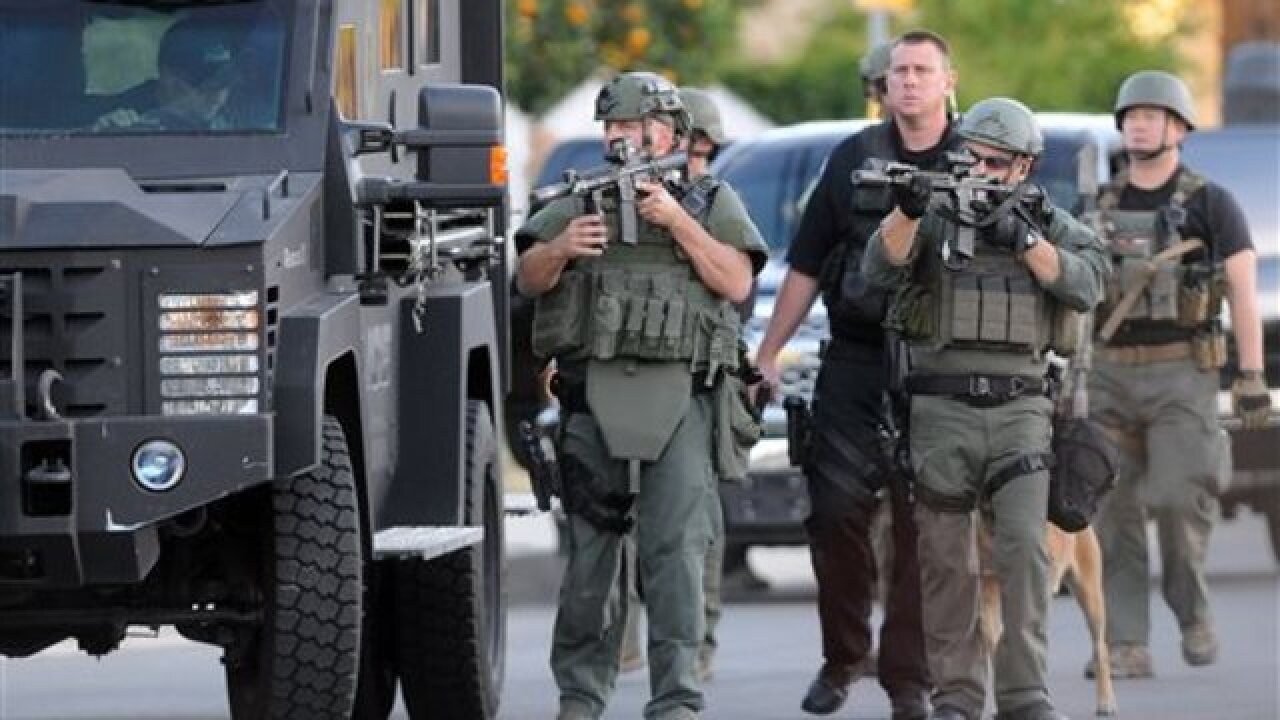 SAN BERNARDINO, Calif. -- One moment, Syed Rizwan Farook was sitting at a table with colleagues at a holiday gathering for county health employees. Then suddenly he disappeared, leaving his coat on his chair.
The next time his co-workers saw him, he was dressed in battle gear and wielding an assault rifle.
Farook, a 28-year-old county restaurant inspector, and his wife or fiancee, Tashfeen Malik, 27, slaughtered 14 people and seriously wounded more than a dozen others in a precision attack Wednesday at a social service center for the disabled before they were gunned down in an SUV a few miles away in a furious shootout with police.
Investigators Thursday were trying to learn why the couple left behind their baby daughter and went on the rampage — the nation's deadliest mass shooting since the Newtown, Connecticut, school tragedy three years ago that left 26 children and adults dead.
Among the possible motives, according to the FBI: some kind of workplace grudge or terrorism. But the bureau would not elaborate.
Farook was born in the U.S. to a Pakistani family and had been a San Bernardino County employee for five years, according to authorities. San Bernardino Police Chief Jarrod Burguan said he had no information on Malik's background. Relatives said Farook had traveled to Saudi Arabia to meet his wife.
Police and federal agents for a second day searched a home in neighboring Redlands, about 7 miles from the massacre at the Inland Regional Center. A black car parked outside was also searched.
The home is where officers initially saw a vehicle matching the description of the attackers' SUV in the hours before the final gunbattle. A bomb squad swept the home with robots Wednesday.
Police didn't immediately say if the couple had lived at the home. Public records show it is a possible residence of a Farook family member.
Residents told KABC-TV Redlands is a sleepy town and expressed shock that the killers might be their neighbors.
The attackers invaded the center about 60 miles east of Los Angeles around 11 a.m., opening fire in a conference area where county health officials were having an employee banquet.
"They came prepared to do what they did, as if they were on a mission," Burguan said.
Farook attended the banquet before leaving — and then returning to kill.
Co-worker Patrick Baccari said he was sitting at the same table as Farook, who suddenly disappeared. Baccari said that when the shooting started, he sought refuge in a bathroom and suffered minor wounds from shrapnel slicing through the wall.
The shooting lasted about five minutes, he said, and when he looked in the mirror he realized he was bleeding.
"If I hadn't been in the bathroom, I'd probably be laying dead on the floor," he said.
Baccari described Farook as reserved and said he showed no signs of unusual behavior. Earlier this year he traveled to Saudi Arabia and returned with a wife, later growing a beard, Baccari said.
The couple dropped off their 6-month-old daughter with relatives Wednesday morning, saying they had a doctor's appointment, Hussam Ayloush, executive director of the Council on American-Islamic Relations, said after talking with family.
Farhan Khan, who is married to Farook's sister, told reporters that he last spoke to his brother-in-law about a week ago. Khan condemned the violence and said he had "absolutely no idea" why Farook would do such a thing.
Seventeen people were wounded, according to authorities. Ten were hospitalized in critical condition, and three in serious condition, Fire Chief Tom Hannemann said.
About four hours after the morning carnage, police hunting for the killers riddled a black SUV with gunfire in a shootout 2 miles from the social services center in this Southern California city of 214,000 people.
Farook and Malik were found with assault rifles and semi-automatic handguns, and were wearing "assault-style clothing" with ammunition attached, authorities said.
Three explosive devices — all connected to one another — were found at the social services center, police said.
Federal authorities said the two assault rifles and two handguns used in the violence had been bought legally, but they did not say how and when they got into the attackers' hands.
___
Associated Press writers Brian Melley, John Antczak, Christopher Weber, John Rogers, Christine Armario and Sue Manning in Los Angeles; Amy Taxin in Redlands; Eric Tucker and Tami Abdollah in Washington; Gillian Flaccus in Anaheim, Alina Hartounian in Phoenix; Michael Sisak in Philadelphia; and Hannah Cushman in Chicago contributed to this story. Pritchard reported from Los Angeles.
RELATED LINKS:
Associated Press 2015