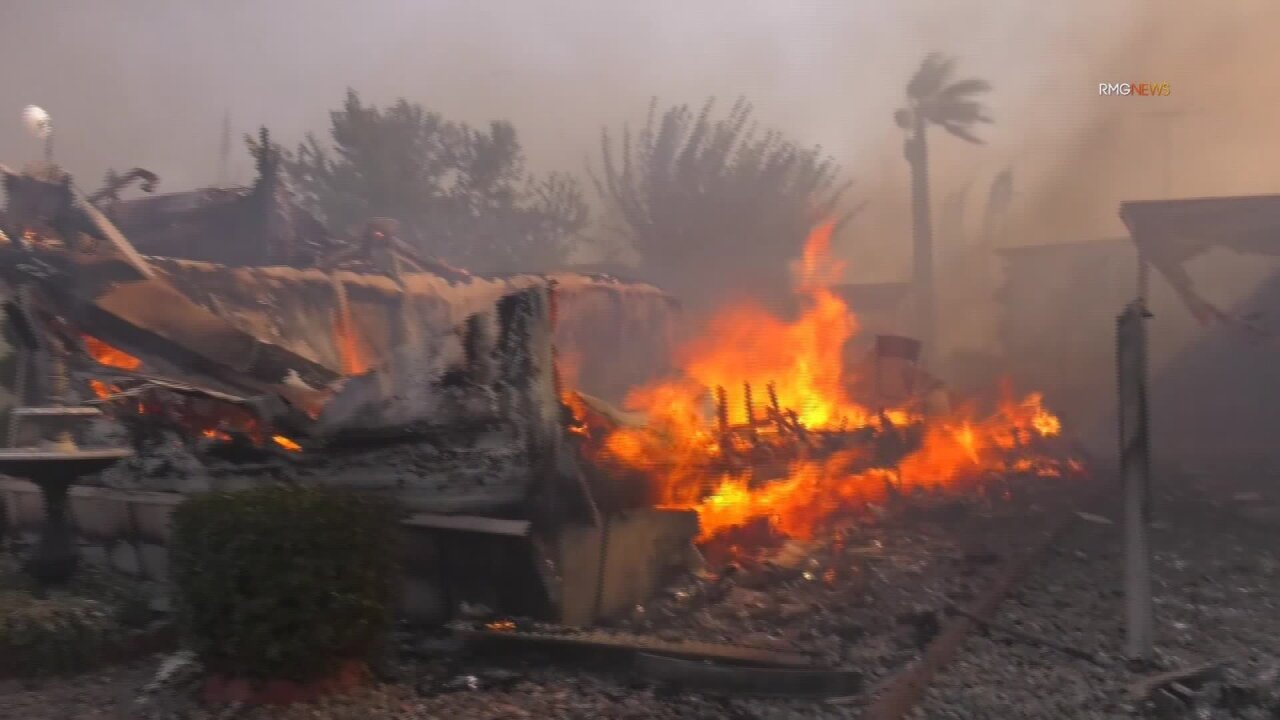 PORTER RANCH (CNS) - A 7,552-acre brush fire continued to burn in the northern San Fernando Valley Saturday after damaging or destroying 31 structures, forcing about 100,000 people from their homes and creating dangerously unhealthy air quality over a huge chunk of the Southland.

The Saddleridge Fire, which officials said was 19% contained as of Saturday morning, burned in the areas of Sylmar, Granada Hills and Porter Ranch.

One person, described only as a man in his 50s, died of a heart attack Friday morning in the Porter Ranch area, according to the LAFD. Terrazas said the man was actually speaking to firefighters when he went into cardiac arrest, and he died at a hospital. According to reports from the scene, the man had been working to protect his home from the blaze.

One firefighter suffered a minor eye injury, according to the LAFD.

Humidity levels remained in the single digits Saturday, prompting an extension of a red flag warning until 6 p.m. Santa Ana wind levels were gusting lighter at 20 to 30 mph and could reach as high as 40 mph in the afternoon, according to the National Weather Service.

A smoke advisory was issued by the South Coast Air Quality Management District through at least Sunday morning for the entire San Fernando Valley, areas west of central Los Angeles, and coastal areas west of the 110 Freeway. People who can smell smoke or see ash are advised to remain indoors with windows and doors closed, and avoid vigorous physical activity.

The evacuation orders affected roughly 23,000 homes -- equating to about 100,000 people, authorities said. By noon Saturday, evacuation orders were lifted for all homes south of the 118 Freeway, areas west of Mason Avenue and southwest of Corbin Avenue, and smaller areas to the east. The LAFD has a website with an updated evacuation map at www.lafd.org/news/saddle-ridge-brush- fire.

Meanwhile, Los Angeles police were arranging escorts for people in other areas to briefly return to their homes for five minutes to collect important documents, medications or other needed items. Escorts were available at the following locations:

Any resident who chose to stay in the evacuation zone would be warned against doing so, according to LAPD Chief Michel Moore.

"If individuals refuse to leave, they'll be admonished, we'll body- worn camera record them, we will get their next of kin and their information, and they'll be left there over our objections," Moore told reporters Friday evening.

Those centers accept small pets. Large animals can be taken to the Hansen Dam Recreation Area at 11770 Foothill Blvd. in Lake View Terrace. Pierce College in Woodland Hills was accepting large animals, but was full Saturday. Those needing help with the evacuation of large animals were advised to contact the East Valley Animal Shelter at 818-756-9323.

About 330 juveniles and staff from the Barry J. Nidorf Juvenile Hall at 16350 Filbert St. in Sylmar were evacuated Friday morning. The Sylmar Juvenile Courthouse at the same location was also closed. Court officials said all cases on calendar Friday were postponed, except those with "statutory deadlines," which were being heard at the Eastlake Juvenile Courthouse, 1601 Eastlake Ave., Los Angeles.

The juveniles were evacuated to Los Padrinos Juvenile Hall, located at 7285 Quill Drive in Downey.

"Visiting of youth who are assigned to Barry J Nidorf Juvenile Hall and currently being housed at Los Padrinos Juvenile Hall due to the (Saddleridge Fire) will resume on Sunday, October 13," the department tweeted late Friday night.

And according to Caltrans, the following freeways are now open in the Saddleridge Fire area:

-- the eastbound Foothill (210) Freeway at the Golden State Freeway;

-- the westbound Foothill Freeway at the Ronald Reagan Freeway

Los Angeles Mayor Eric Garcetti, who cut short a trip to Copenhagen, Denmark, due to the fire, and county Board of Supervisors chair Janice Hahn both signed local emergency declarations.

Gov. Gavin Newsom declared a state of emergency for Los Angeles and Riverside counties. The declarations free up local and state resources to aid in the firefighting effort.

The USPS announced that mail delivery would be attempted Saturday "in all accessible areas." The post office at 19300 Rinaldi St. in Porter Ranch reopened for business from 10 a.m. to 3 p.m. Saturday.

There was no immediate word on what sparked the blaze. Terrazas noted that city officials had been working with the Los Angeles Homeless Services Authority to clear homeless people out of fire-prone areas during the red-flag conditions that began Thursday, but he said he did not know whether there were any encampments near the flashpoint of the blaze.

Various media reports cited a witness claiming the first flames erupted at the base of a Southern California Edison transmission tower along Saddle Ridge Road. Terrazas said he was aware of the reports "of a witness seeing fire fall from a transmission tower," but there still had not been any determination of what caused the fire.

The fire was first reported just after 9 p.m. Thursday off the westbound Foothill (210) Freeway near Yarnell Street and Saddle Ridge Road in Sylmar, and quickly spread due to wind-blown embers that jumped the Golden State (5) Freeway about 11:20 p.m., spreading the flames into Granada Hills and Porter Ranch.

By Friday afternoon, fire officials said the flames were primarily advancing on the fire's northern flank.