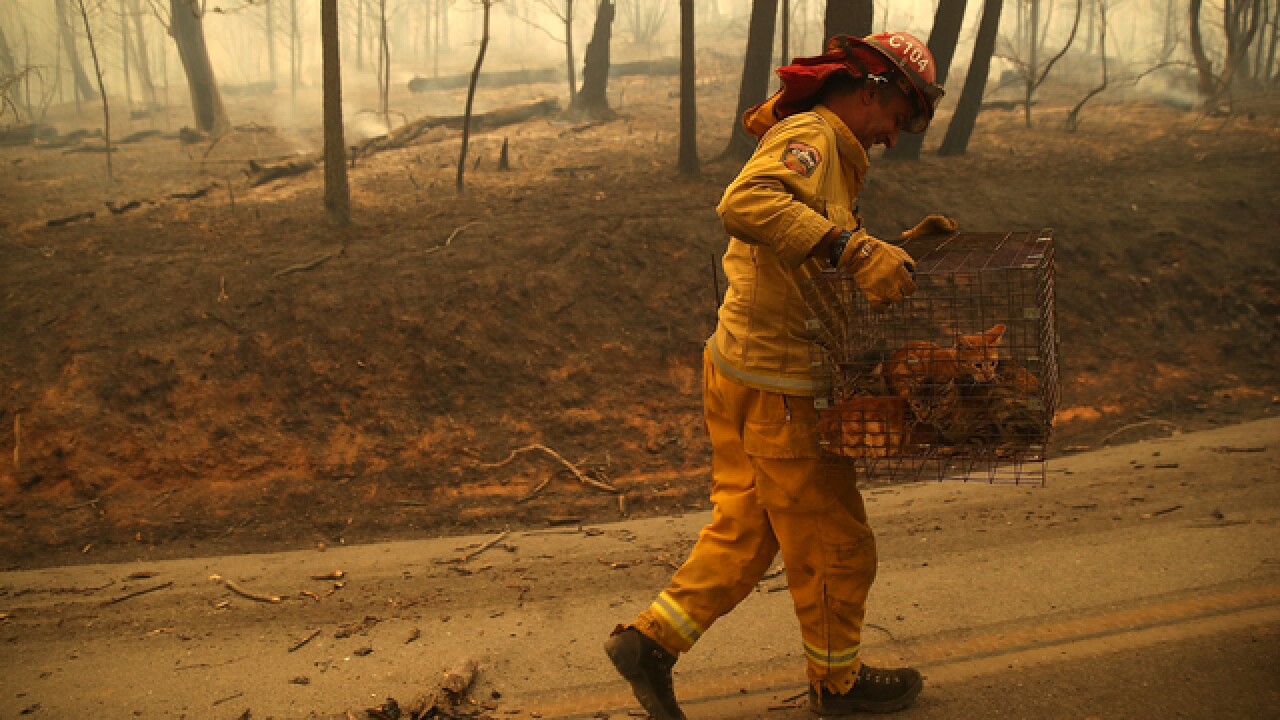 Image copyright 2018 Getty Images. All rights reserved. This material may not be published, broadcast, rewritten, or redistributed.
Justin Sullivan
<p>BIG BEND, CA - NOVEMBER 09: Cal Fire Captain Steve Millosovich carries a cage full of cats that were found in the road after the Camp Fire moved through the area on November 9, 2018 in Big Bend, California. Fueled by high winds and low humidity, the rapidly spreading Camp Fire ripped through the town of Paradise and has quickly charred 70,000 acres and has destroyed numerous homes and businesses in a matter of hours. The fire is currently at five percent containment. (Photo by Justin Sullivan/Getty Images)</p>

His fire engine was trapped with dozens of cars and panicked people as an inferno roared through the Sierra Nevada foothills town of Paradise on Thursday, hot enough to peel the firetruck's paint and melt its hoses, blowing relief valves designed to withstand 900 degrees and immolating nearby vehicles.

Four people fleeing their flaming cars pounded on the firetruck's doors and were pulled inside, including a nurse from a nearby hospital with her pant leg on fire. The firefighters pressed fire-resistant blankets against the truck's windows to provide insulation against the searing heat, then waited out the firestorm.

"Faith," Peck said Saturday as he came off a 48-hour double shift. "I don't think I've ever prayed that hard in my life."

The fire that leveled the hillside town of Paradise, population 27,000, and claimed at least 23 lives, roared in so fast that for the first 24 hours, there was no firefight at all — just rescues. They mostly had to watch Paradise burn around them; the opposite of what most firefighters are used to doing.

"It's not an understatement to say that you got your butts kicked" during the initial fire run Thursday, Cal Fire Butte County Unit Chief Darren Read told assembled firefighters Saturday, pausing several times to gather his emotions.

"We had very little time to evacuate our communities, the people were trapped in their homes and their cars, their houses," said Read, who doubles as Paradise fire chief. "And you guys saved the lives of thousands of people in our communities. Truly heroic efforts."

RELATED:  Death toll hits 25 from wildfires at both ends of California

Cal Fire safety officer Jack Piccinini warned firefighters Saturday to watch out for "emotional fatigue" and said many who lost homes themselves in the series of devastating wildfires "were just kind of stunned."

"Between last year and this year, all of you have been on fires where you have seen communities experience devastating losses, not just property damage but also civilian fatalities as well as firefighter fatalities and serious injuries," Piccinini said.

It was the worst fire Thor Shirley had seen in 18 years as a Nevada City-based Cal Fire firefighter.

"It was round-robin trips, just pulling people out of their houses or people trapped on the road," he said. "It was just scoop 'em up, load 'em up and go."

His crew rescued 14 people, including several who were bed-ridden, three nurses, a doctor, a sheriff's deputy and a California Highway Patrol officer.

"At that point the only thing you can do is protect life. ... It's frustrating because you want to save property and lives. You just have to readjust what you do, conditions dictate the tactics — to save people's lives is our No. 1 goal."

Peck and Shirley, who work out of separate fire stations, were each halfway through breakfast Thursday morning when the emergency call came in. Hours later their engines were caught in the same traffic jam as cars ignited and trapped firefighters and fleeing residents alike.

They all might have burned right there were it not for a Cal Fire bulldozer operator who "saved our bacon," Peck said. The bulldozer plowed flaming vehicles out of the roadway to clear a lane for the fire engines and several dozen vehicles to move to a grassy area that the bulldozer had scraped down to fireproof mineral soil. They all stayed in the makeshift refuge until the worst of the fire passed.

"Every year you do this, things just add up and you kind of numb yourself to it," Piccinini said standing by his truck, his eyes bloodshot, his hair disheveled, 48-hours of stubble freckling his face. "But every once in a while it's just like right off the Richter scale."