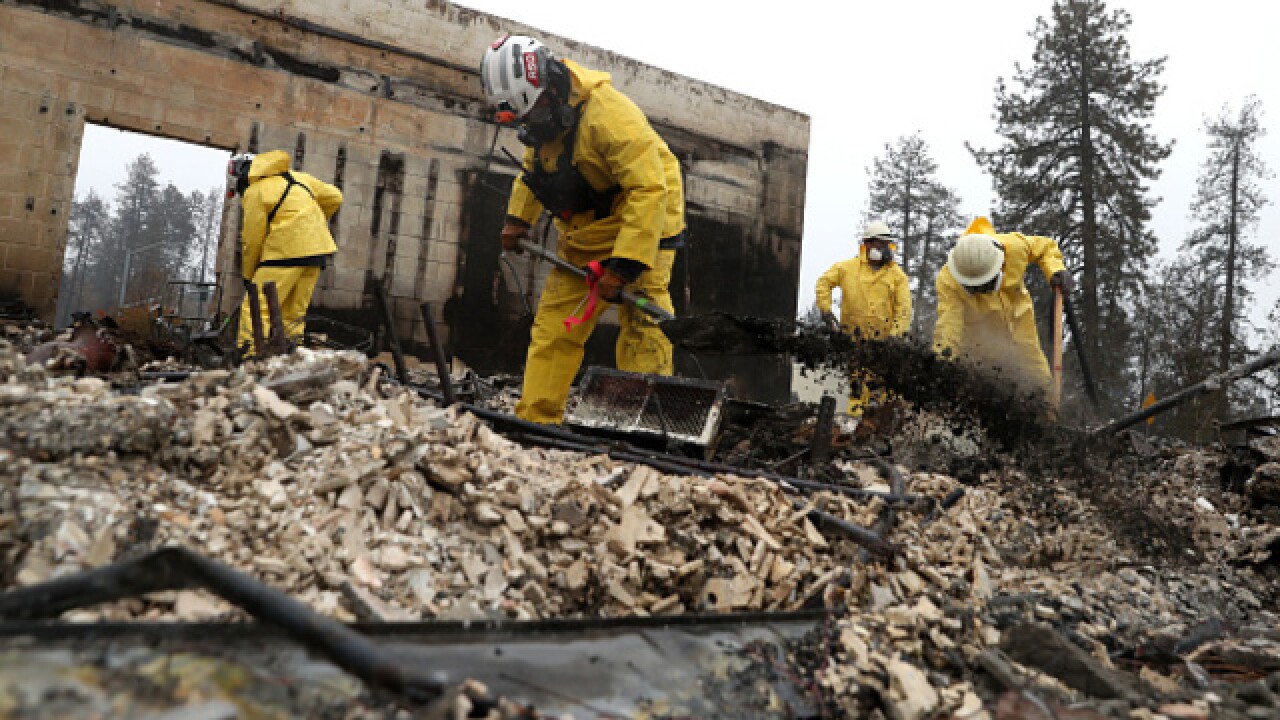 Copyright 2018 Scripps Media, Inc. All rights reserved. This material may not be published, broadcast, rewritten, or redistributed.
Justin Sullivan
<p>PARADISE, CALIFORNIA - NOVEMBER 21: Search and rescue crews dig through the burnt remains of a business as they search for human remains on November 21, 2018 in Paradise, California. Fueled by high winds and low humidity the Camp Fire ripped through the town of Paradise charring over 150,000 acres, killed at least 81 people and has destroyed over 18,000 homes and businesses. The fire is currently at 80 percent containment and hundreds of people still remain missing. (Photo by Justin Sullivan/Getty Images)</p> 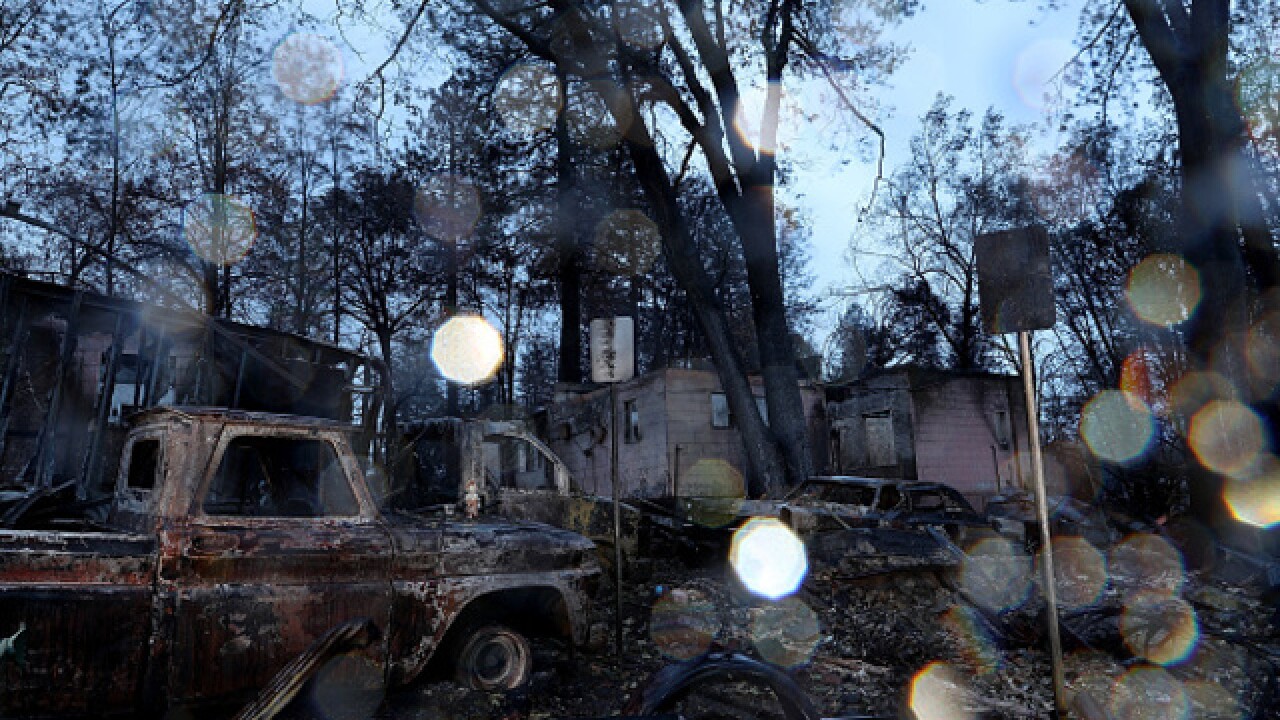 PARADISE, Calif. (AP) — Volunteers in hard hats, respirators and yellow rain pants had been poking through ash and debris looking for human remains in the wake of a Northern California wildfire, but a downpour Friday turned the ash into a thick paste, making it more difficult to find telltale fragments of bone and forcing them to temporarily stop their work.

Craig Covey, who leads a search team from Southern California's Orange County, said those looking through the devastation in Paradise and two nearby communities were not told to stop but that he chose to take a break until the rain clears.

Heavy rain and strong winds were knocking over trees, raising the risk they could fall on searchers, he said.

"It's just not worth it — we're not saving lives right now, we're recovering lives," Covey said of the dangerous conditions.

The nation's deadliest wildfire in the past century has killed at least 84 people, and more than 560 are still unaccounted for. Despite the inclement weather, more than 800 volunteers searched for remains on Thanksgiving and again Friday, two weeks after flames swept through the Sierra Nevada foothills, authorities said.

Covey's team of about 30 had been working for several hours Friday morning before stopping and returning to a staging area with hot coffee and food under two blue tents. An electric heater provided warmth.

While the rain is making everybody colder and wetter, they're keeping the mission in mind, search volunteer Chris Stevens said, standing under an awning as the team waited out a stretch of heavy rain.

"Everyone here is super committed to helping the folks here," he said.

Two days of showers have complicated the search but also helped nearly extinguish the blaze, said Josh Bischof, operations chief for the California Department of Forestry and Fire Protection said.

Once the rain clears, state officials will be able to determine if the blaze is fully out, he said.

The Camp Fire ignited Nov. 8 and has destroyed nearly 19,000 buildings, most of them homes. That's more than the worst eight fires in California's history combined, the agency said, with thousands of people displaced.

The volunteers interrupted by rain Friday found other ways to help.

Covey and several team members took two big brown bags full of lunch to 64-year-old Stewart Nugent, who stayed in his home and fought off flames with a garden house, a sprinkler and a shovel. He's been there for two weeks with his cat, Larry.

The first winter storm to hit California has dropped 2 to 4 inches of rain over the burn area since it began Wednesday, said Craig Shoemaker with the National Weather Service in Sacramento.

The weather service issued a warning for possible flash flooding and debris flows from areas scarred by major fires in Northern California, including the areas burned in Paradise.

Shoemaker said the rain there has been steady, and forecasters expect the heaviest showers in the afternoon.

"So far we've been seeing about a quarter-inch of rain falling per hour," he said. "We need to see an inch of rain per hour before it could cause problems."

He said the rain was expected to subside by midnight, followed by light showers Saturday.

In Southern California, more residents were allowed to return to areas that were evacuated because of the 151-square-mile (391-square-kilometer) Woolsey Fire as crews worked to repair power, telephone and gas utilities.

About 1,100 residents were still under evacuation orders in Malibu and unincorporated areas of Los Angeles County, down from 250,000 at the height of the fire.

The fire erupted just west of Los Angeles amid strong winds on Nov. 8 and burned through suburban communities and wilderness parklands to the ocean, leaving vast areas of blackened earth and many homes in ashes. Officials say three people were found dead and 1,643 structures, most of them homes, were destroyed.