A group of San Diego lawmakers, water agencies and business leaders are joining forces in opposition of a possible new state tax on tap water.

(KGTV) - A group of San Diego lawmakers, water agencies and business leaders are joining forces in opposition of a possible new state tax on tap water.

Under the proposed State Senate Bill 623, Californians would see an additional 95 cents per month on their water bills.

SB623 is one of two articles of legislation being discussed by state lawmakers that could see residents’ water bills go up by more than $15 per month.

The goal of the tax would be to clean polluted groundwater around the state, particularly agricultural areas where water is considered undrinkable -- with arsenic, lead and nitrate levels that have been compared to Flint, Michigan’s crisis.

The USGS map below show various water sites around California. Click on the map for more information on the sites.

Approximately 300 water systems in California currently have pollutant violations, such as arsenic, lead, nitrates, and uranium that have been linked to nausea and vomiting, cancer, reduced mental functioning in children, nervous system decline, miscarriages, and numerous other health issues.

Support of the fund will come from a fertilizer mill fee, a fee on dairies, and a fee assessed on water bills of no more than $1 a month per household, and is anticipated to generate $140 million a year. Low-income rate exemptions are provided for households under 200% of the federal poverty level."

The State Water Resources Control Board created a map of water pollutant assessments throughout the state. Click on the map below for more data. 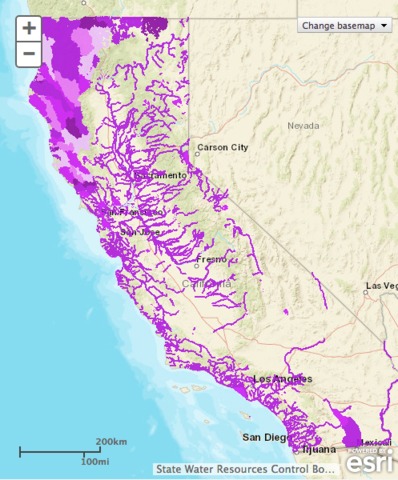 Numerous agricultural groups and environmental organizations have come out in support of SB623, but many, including the San Diego County Taxpayers Association and other local groups, have said the bill is “counterproductive because it will make it harder for low-income residents to afford this necessity. A precedent-setting tax also could lead to additional taxes on water for a variety of project and programs.”

Numerous state agencies and coalitions have come out against the proposed tax as well as nearly three quarter of Californians who oppose the measure, according to a recent poll.

So what do these organizations propose as a solution? The local coalition against the tap water tax has proposed several funding options that address the clean water concerns.

Supervisor Kristin Gaspar, chairwoman of the County Board of Supervisors spoke out at a news conference Wednesday. “We all support clean, safe and reliable water for all Californians, and we agree on the importance of helping disadvantaged communities improve access to safe water supplies,” said Gaspar. “But we oppose misguided efforts to force Californians to pay a tax on drinking water. That approach will only make it harder for residents to afford this basic necessity.”

“The water tax violates a core tenet of pollution cleanup policy: polluter pays,” said Haney Hong, president & CEO of the San Diego County Taxpayers Association. “Why not collect more revenue from the actual polluters rather than all consumers? It doesn’t make sense to place a disproportionate responsibility on ratepayers to clean up groundwater contamination caused by others.”