John Cox, Gavin Newsom battle it out in debate 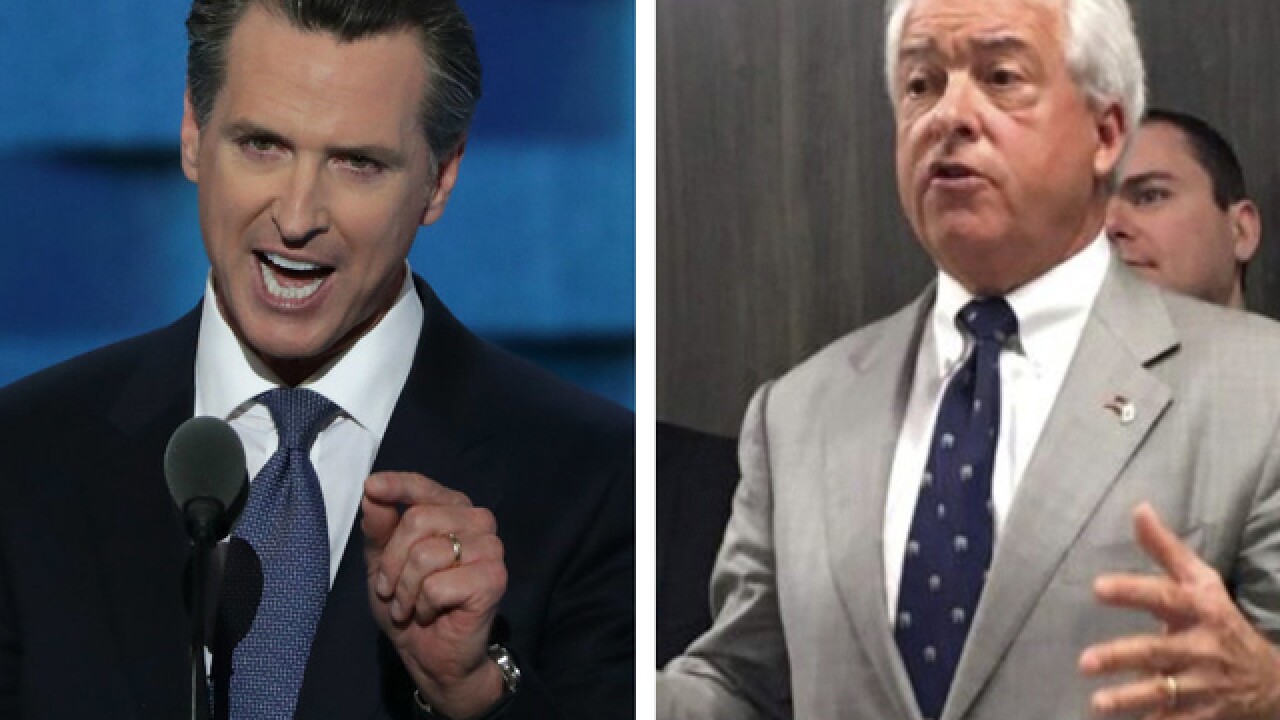 SAN FRANCISCO (AP) — Republican John Cox focused on his stance to try and fix the high cost of living in California, while Democrat Gavin Newsom highlighted his opposition to Trump during a debate Monday.

Cox pledged to reduce taxes and regulations that he says drive up the cost of living in the nation's most populous state while Newsom, a former mayor of San Francisco, is running on his willingness to make bold decisions and his opposition to Trump.

Neither strayed from their well-worn positions, and the debate appeared to do little to change the race in which Newsom is heavily favored.

"We represent the vast majority of Californians that reject John Cox's absolute allegiance to Trump and Trumpism," Newsom, California's lieutenant governor, said during what's likely to be the only one-on-one contest between the two men.

Both candidates agreed that tackling issues such as housing affordability, homelessness and California's cost of living should be the priority of the next governor, but they presented vastly different visions for how to proceed.

The two also sparred on criminal justice reform, immigration and the environment.

"This campaign is about change versus the status quo. I represent change," Cox said in arguing that the policies of Democrats have made California unaffordable.

The Nov. 6 election comes as the state faces a housing crisis and is drastically behind on building what it needs to house its population of nearly 40 million people.

Cox said he would change environmental regulations that can make it so expensive to build in the state. Newsom hinted at reforming California's property tax system, saying rules that limit how much property tax cities can collect saps the incentive from building.

On criminal justice reform, Newsom said he would continue the policies of outgoing Gov. Jerry Brown that focus on rehabilitating convicted criminals and putting fewer people behind bars.

Cox said he wouldn't have signed a new law that opens police misconduct records to the public.

"I fear that under a Cox administration working hand-in-glove with Donald Trump that our progressive and enlightened polices on immigration will roll back into the dark ages," he said.

The candidates split on a new California law that eliminates money bail. Cox said the policy wrongly eliminates the entire bail industry, while Newsom said systems based on money harm the poor and racial minorities.

A September poll by the Public Policy Institute of California showed Newsom with a comfortable but shrinking lead over Cox — 51 percent to 39 percent with 7 percent of likely voters undecided.

The survey had a margin of error of 4 percentage points.

Campaign finance records show Newsom had $16 million in the bank on Sept. 22, compared with $1.7 million for Cox.Cox is a lawyer, accountant and investor from the San Diego area who has never held elected office.