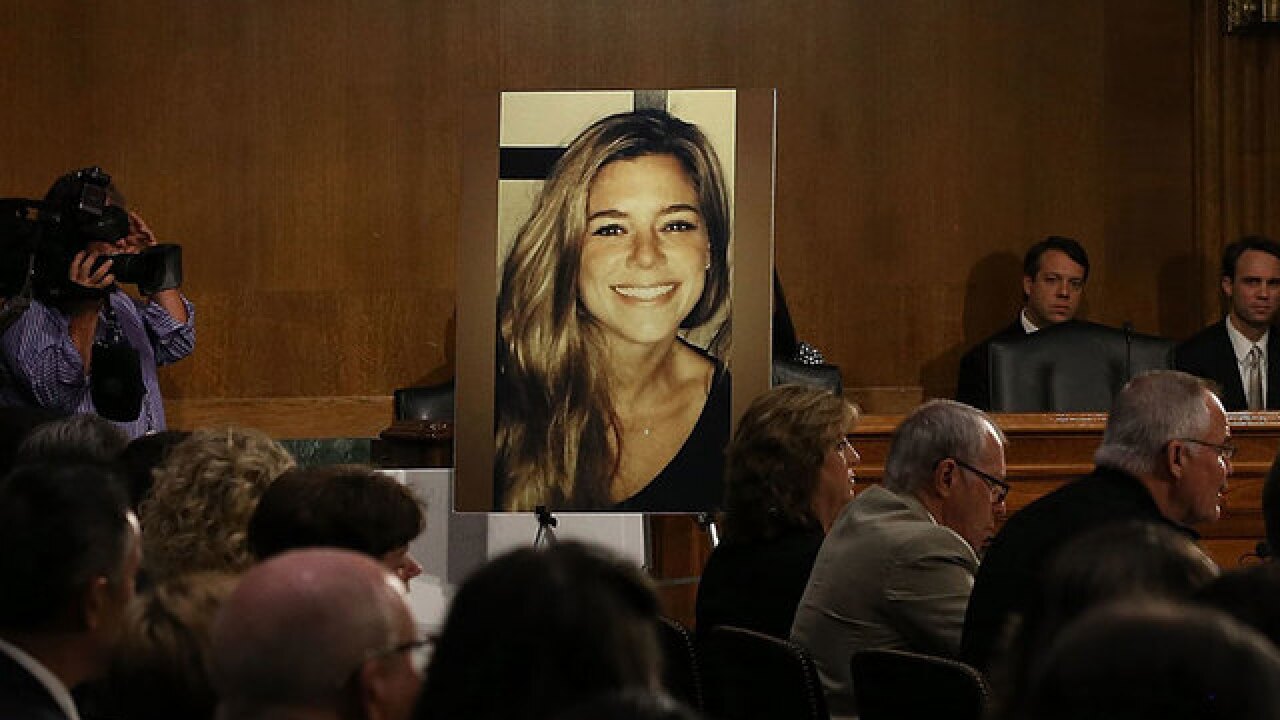 Copyright Getty Images
Mark Wilson
A large photo of Kathryn 'Kate' Steinle, who was killed by an illegal immigrant in San Francisco, is shown while her dad Jim Steinle testifies during a Senate Judiciary Committee hearing on Capitol Hill, July 21, 2015 in Washington, D.C. The committee heard testimony from family members who have had loved ones killed by illegal immigrants.

House expected to vote on 2 immigration bills
-- Two immigration enforcement bills -- Kate's Law and the No Sanctuary for Criminals Act -- are expected to go before the House of Representatives this week for a vote.

Kate's Law is named for Kate Steinle, a 32-year-old woman shot and killed in San Francisco in 2015. The accused shooter, Francisco Sanchez, was an undocumented immigrant with seven felony convictions on his record who had been deported from the U.S. five times, according to White House officials.

Under Kate's Law (known as H.R. 3004), White House officials said: "H.R. 3004 would increase the penalties that may be imposed on criminal aliens convicted of illegal reentry, deterring reentry and keeping criminal aliens off our streets. The bill is consistent with the Administration's broader efforts to strengthen enforcement of our immigration laws and improve the security of our Nation's borders.

If H.R. 3004 were presented to the President in its current form, his advisors would recommend that he sign the bill into law."

The No Sanctuary for Criminals Act would defund so-called sanctuary cities such as Los Angeles and San Francisco.

White House officials said of H.R. 3003: "This bill would ensure that American taxpayers are not subsidizing States and localities that work to affirmatively thwart Federal law enforcement efforts.

For States or localities determined to be in violation of Federal law, H.R. 3003 would restrict their eligibility to receive certain Department of Justice or Department of Homeland Security grants. Instead, under this bill, those grant funds would be reallocated to States and localities that comply with Federal law. Additionally, this bill would provide for more robust detention of criminal aliens. The Administration is committed to strengthening enforcement of our Nation's immigration laws in order to improve national security and public safety. This legislation is critical to these efforts."

The passage of both bills would go in line with Trump's presidential campaign promises to toughen immigration policies and strengthen U.S. borders.

A statement released by White House officials said: "President Donald J. Trump has accepted French President Emmanuel Macron's invitation to visit France on Bastille Day. President Trump looks forward to reaffirming America's strong ties of friendship with France, to celebrating this important day with the French people, and to commemorating the 100th anniversary of America's entry into World War I. The two leaders will further build on the strong counter-terrorism cooperation and economic partnership between the two countries, and they will discuss many other issues of mutual concern."

Trump once again tackles "fake news"
-- President Trump took to Twitter to once again to speak on what he considers "fake news" -- this time targeting the Washington Post, owned by Amazon CEO Jeff Bezos.
In a series of tweets Wednesday morning, Trump said:

The #AmazonWashingtonPost, sometimes referred to as the guardian of Amazon not paying internet taxes (which they should) is FAKE NEWS!

Some of the Fake News Media likes to say that I am not totally engaged in healthcare. Wrong, I know the subject well & want victory for U.S.

The failing @nytimes writes false story after false story about me. They don't even call to verify the facts of a story. A Fake News Joke!

On Tuesday, Trump slammed "Fake News" CNN after three of its journalists resigned over a since-retracted article on Russia.

The Washington Post reported that several of President Trump's golf courses feature a magazine cover of Trump with the headline "The 'Apprentice' is a television smash!" The cover is displayed within at least five of Trump's clubs, including the Mar-a-Lago property in Palm Beach, Florida.

The cover that is dated March 1, 2009 is fake, Time confirmed to the Washington Post.