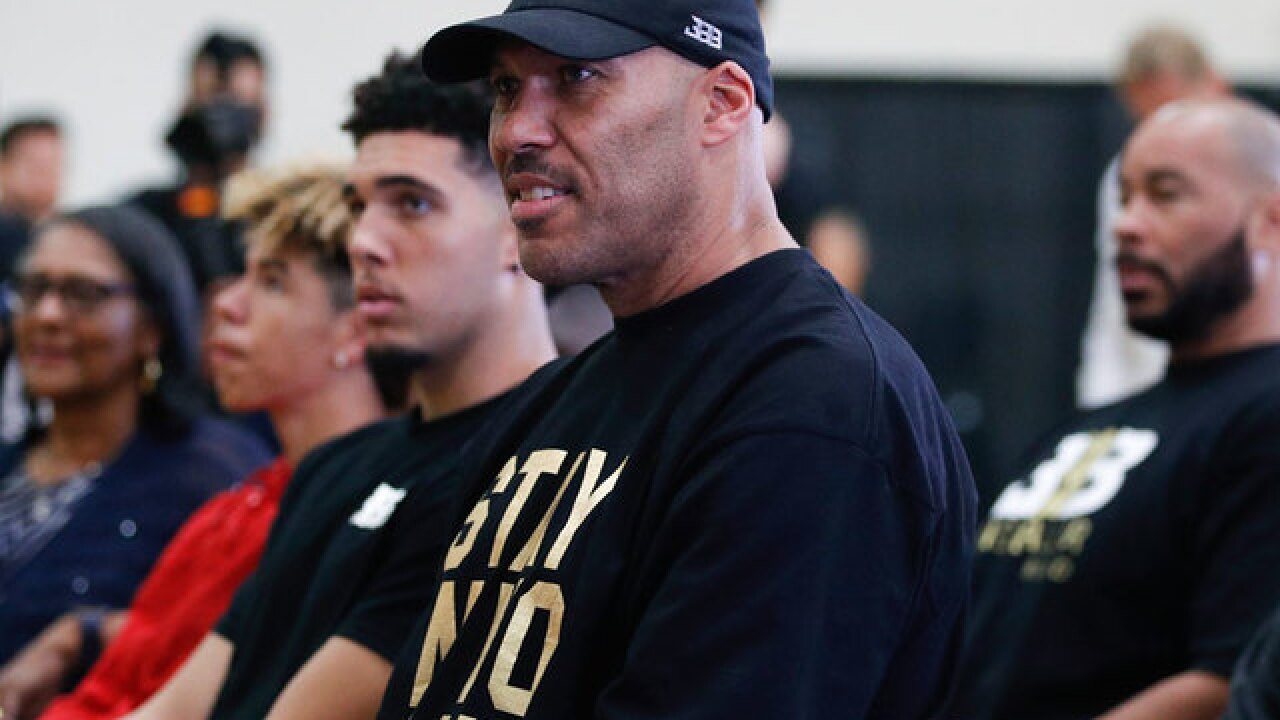 Wannabe @Lakers coach, BIG MOUTH @Lavarbigballer knows if it weren’t for President @realDonaldTrump , his son would be in China for a long, long, long time! #FACT https://t.co/j2GcY7F4f9

LaVar Ball recently made comments to ESPN that downplayed the alleged shoplifting incident and seemed to minimize Trump’s involvement in the release of the basketball players’ release.

"What was he over there for? Don't tell me nothing. Everybody wants to make it seem like he helped me out,” Ball said of Trump.

LaVar Ball added, "Like I told him, 'They try to make a big deal out of nothing sometimes.' I'm from L.A. I've seen a lot worse things happen than a guy taking some glasses. My son has built up enough character that one bad decision doesn't define him. Now if you can go back and say when he was 12 years old he was shoplifting and stealing cars and going wild, then that's a different thing."

LiAngelo Ball, Cody Riley and Jalen Hill were detained in China earlier in the month after allegedly shoplifting from high-end stores in China.

In a press conference, the freshman player thanked the U.S. government and Trump for aiding in the players’ release.

All three players have been indefinitely suspended.

Washington (CNN) -- The top US nuclear commander said Saturday he would push back against an order from President Donald Trump for a nuclear strike if it were "illegal." Speaking at the Halifax International Security Forum in Nova Scotia, Canada, Gen.

John Hyten, who is the commander of US Strategic Command, shared what would happen if he were ordered to launch a nuclear strike.

"I provide advice to the President," Hyten said. "He'll tell me what to do, and if it's illegal, guess what's going to happen? I'm gonna say, 'Mr. President, that's illegal.' Guess what he's going to do? He's going to say, 'What would be legal?' And we'll come up with options of a mix of capabilities to respond to whatever the situation is, and that's the way it works. It's not that complicated."

(CNN) -- As a swirl of sexual impropriety allegations roil Washington, President Donald Trump's top aides are trying to inoculate him from comparisons with the stories of more than a dozen women who have accused Trump of sexual misconduct.

But the allegations against Minnesota Democratic Sen. Al Franken, who apologized after a California radio host and model said he had groped and kissed her without consent in 2006, and Roy Moore, the Republican Senate candidate in Alabama who has been accused by multiple women of pursuing sexual relationships with them as teenagers when he was in his early 30s, have dredged up the allegations last year made against Trump, including the 2005 Access Hollywood tape in which Trump brags about sexually assaulting women.

White House Press Secretary Sarah Sanders said Friday that there are no similarities between the Trump and Franken accusations.

Sex-harassment allegation wave 'will only be a watershed moment' if men 'man up': Fiorina

(ABC) -- Carly Fiorina, a former CEO of Hewlett Packard who ran for the Republican nomination for president in 2016, said the current wave of sexual harassment allegations from Hollywood to Capitol Hill "will only be a watershed moment if men decide to step forward."

Fiorina told ABC News Chief Anchor George Stephanopoulos on "This Week" Sunday, "What needs to happen now is the guys need to man up, the guys who know this is happening."

"Most men are good, decent, respectful men. But enough men are not, and all the other men around them know they are not," said Fiorina, who was part of a "This Week" panel addressing the wave of sexual harassment and misconduct allegations.