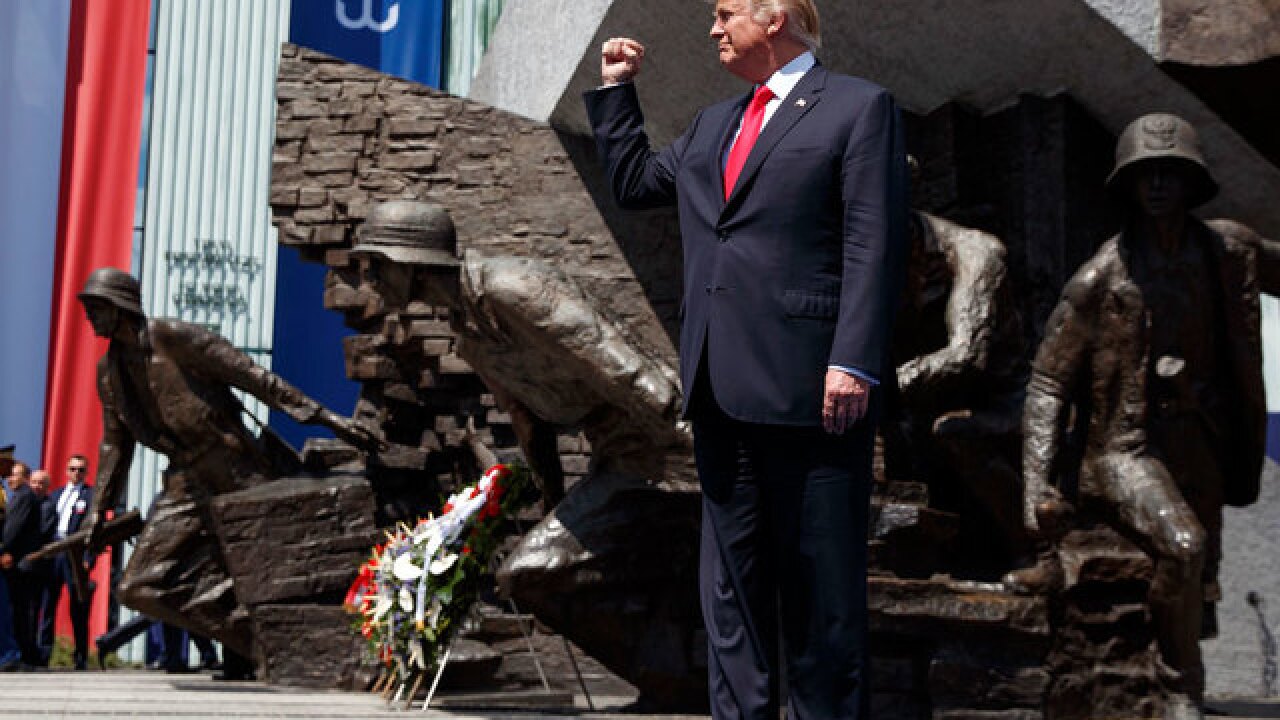 Trump addresses Russia, North Korea during Poland visit
-- President Trump discussed the ongoing situation with North Korea and referenced Russia's role in the election during his visit to Poland.

At a news conference in Warsaw, Trump commented on North Korea's recent missile test and called for the world to confront the country.

"We will see what happens. I don't like to talk about what I have planned, but I have some pretty severe things that we are thinking about. That doesn't mean we are going to do them. I don't draw red lines," Trump said.

On Tuesday, North Korea successfully launched a two-stage intercontinental ballistic missile -- a missile that could travel more than 4,000 miles.

As for Russia's involvement in the 2016 election, the president said he believes Russia was behind the meddling but also said "it could have been other people in other countries."

After delivering a spech in Warsaw, Trump travels to Germany to meet with German Chancellor Angela Merkel. He will then head to Hamburg for the G20 summit, where he is scheduled to meet with Russian President Vladimir Putin.

What did Trump do to his first presidential paycheck?
-- In April, the White House announced President Trump's first paycheck would be donated to the National Park Service.

Now, the National Park Service revealed where the money is going.

According to National Park Service officials, the president's first-quarter salary of about $78,000 will go to the Civil War memorial Antietam National Battlefield in Maryland. It will help restore some of the battlefield's structures.

Antietam National Battlefield is the site of the deadliest single-day battle in U.S. history. Some foundations and an anonymous donor added money to Trump's contribution as well, increasing the total donation to over $260,000.

Interior Secretary Ryan Zinke said he was "honored" to deliver the donation to the park and said his visit "underscores the importance of why we must preserve these historic grounds."

Despite Trump's donation, his proposed budget would cut $350 million from NPS funding. Trump also has yet to nominate a director of the National Park Service.

Steven Marks, who faces criminal mischief and breach of peace charges, is accused of writing threats against the president. He reportedly carried out the acts "out of anger toward liberals."