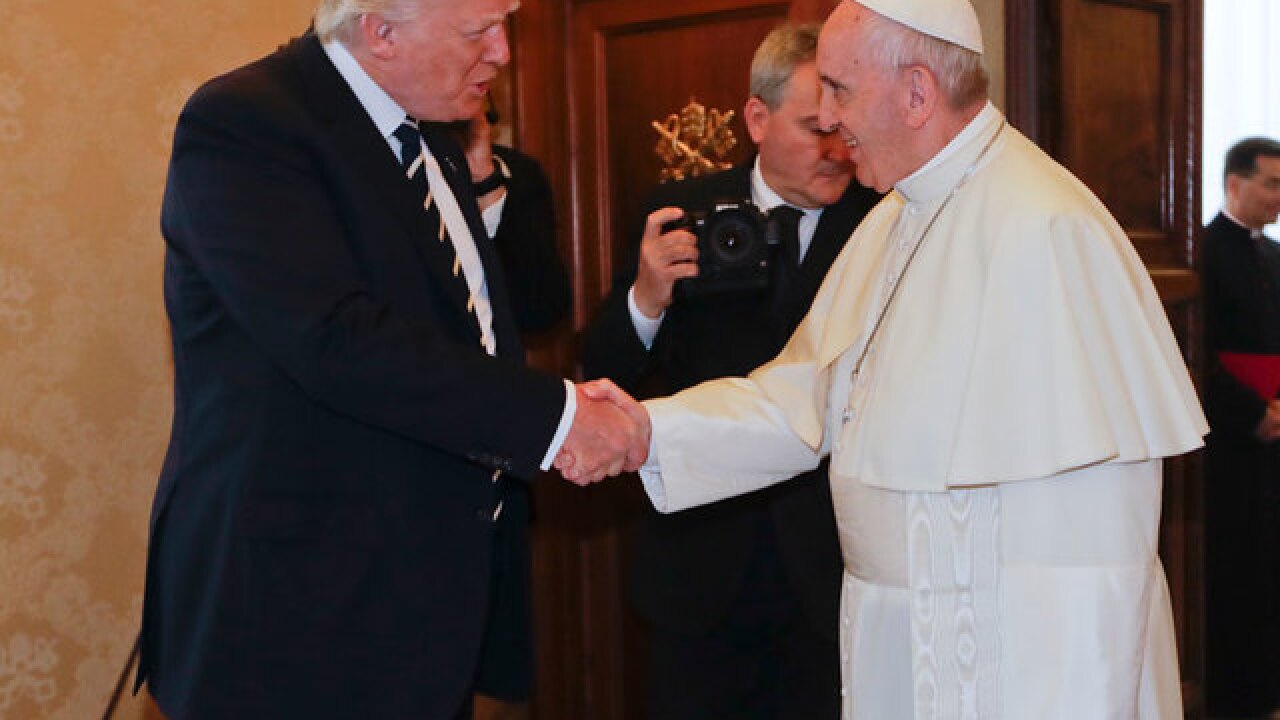 Copyright Associated Press
Alessandra Tarantino/Pool
Pope Francis meets with President Donald Trump on the occasion of their private audience, at the Vatican, Wednesday, May 24, 2017.

Trump meets the Pope
-- President Trump continued his overseas trip with a stop in Vatican City Wednesday for a face-to-face meeting with Pope Francis.

In a statement, the Vatican said that the two men discussed "the promotion of peace in the world through political negotiation and interreligious dialogue" and homed in on the need to protect Christians in the Middle East.

Following the private meeting, Trump told Pope Francis: "Thank you. I won't forget what you said."

Honor of a lifetime to meet His Holiness Pope Francis. I leave the Vatican more determined than ever to pursue PEACE in our world. pic.twitter.com/JzJDy7pllI

The 2016 presidential campaign saw the two men broadcast dueling messages to the world. As Trump promised to ban Syrian refugees, stoke anti-Muslim sentiment in the U.S. and promise to build a wall on the U.S.-Mexico border, the Pope spoke out. Without naming Trump by name, the Pope said in February 2016 that "a person who only thinks about building walls, wherever they may be, and not building bridges, is not Christian."

The Associated Press breaks down the president's plan, agency-by-agency.

Senate Intelligence Chairman Richard Burr and Sen. Mark Warner, the top Democrat on the panel, told reporters they did not believe Flynn could seek Fifth Amendment protections in regard to the documents they requested, and were seeking a firm answer. The committee is leaving open the possibility to filing contempt charges against Flynn later if he refuses to comply.

Burr said Tuesday that "all options are on the table" if Flynn doesn't comply -- including possibly holding him in contempt of Congress -- but he added that was a long way off from where they are now.

President hires private lawyer amid Russia probe
-- President Trump has reportedly enlisted a private attorney to help him beat back the investigations into any potential collusion between his campaign and the Russian government.

Marc Kasowitz, Trump's reported pick, is a partner at Kasowitz, Benson, Torres and Friedman. That happens to be the firm where former Sen. Joe Lieberman currently works. And Lieberman is rumored to be Trump's top choice for FBI director.

CNN, The Associated Press, Newsy contributed to this report