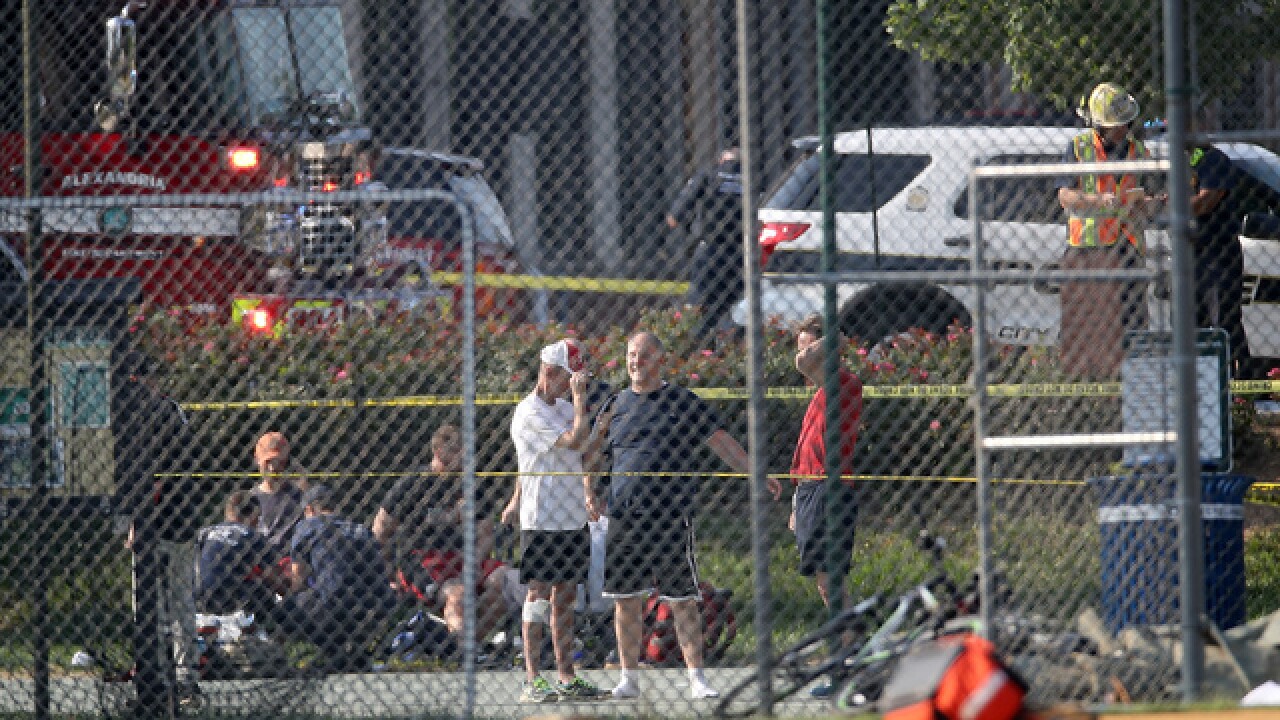 Image copyright 2017 Getty Images. All rights reserved. This material may not be published, broadcast, rewritten, or redistributed.
Win McNamee
<p>Investigators and men dressed in baseball gear gather at Eugene Simpson Field, the site where a gunman opened fire June 14, 2017 in Alexandria, Virginia. Multiple injuries were reported from the instance, the site where a congressional baseball team was holding an early morning practice, including House Republican Whip Steve Scalise (R-LA) who was reportedly shot in the hip. (Photo by Win McNamee/Getty Images)</p>

Here's what's going on in the political world Saturday...

-- A list of names was discovered with the man behind a Congressional baseball game practice shooting this week, CNN said citing a law enforcement source and Rep. Mo Brooks - whose name was listed.

James Hodgkinson, 66, of Belleville, Ill., was shot and killed after firing on a baseball practice for members of Congress in Alexandria, Va., on Wednesday. Hodgkinson was found to have a social media presence depicting pro-Bernie Sanders and anti-Republican sentiments.

Brooks told CNN that he was contacted by law enforcement that his name, along with other a few other Republican Congressmen, was on the list. It's not clear whether the list is meant to be an assassination list as none of the victims of Wednesday's attack were listed, CNN reports.

-- Immigrations and Customs Enforcement Director Thomas Homan warned illegal immigrants Friday that they should be afraid under the Trump Administration.

"It needed to be said," Homan told CNN at a Central American prosperity and security conference. "And by me saying you should be worried, you should be afraid ... When you speed down the highway, you've got to worry, 'Am I going to get a speeding ticket?' You worry. It's natural human behavior."

In remarks to Congress earlier this week, Homan said the Trump Administration would focus on arresting criminals, national security threats, individuals who reenter the country after being legally deported and those individuals who have a final order for deportation.

-- Senate Minority Leader Chuck Schumer sent a letter to Senate Majority Leader Mitch McConnell calling for a meeting with Senators on the future of health care in the U.S.

"Please accept our invitation to sit down together in the old Senate Chamber so we can hear your plans and discuss how to make health care more affordable and accessible in the United States," Schumer wrote in the letter to McConnell.

Republican Senators have been working on a Senate version to repeal and replace Obamacare since the House passed their own measure a month ago.

-- President Donald Trump and First Lady Michelle Obama - and presumably Barron Trump - are set to make their first to the presidential getaway of Camp David this weekend.

The visit to the Maryland compound will be the first such overnight weekend trip for the president since he took office.

If Trump's previous comments about the compound are any indication on how he'll feel about the trip, it may not be his cup of tea.

"Camp David is very rustic. It's nice, you'd like it," the president said shortly before being sworn in, according to CNN. "You know how long you'd like it? For about 30 minutes."

Trump comments on missing sailors off coast of Japan

-- President Trump briefly commented on Twitter, after a US Navy ship collided with a merchant ship off the coast of Japan Friday.

The Seven sailors are missing and the USS Fitzgerald suffered severe damage when the ships collided at about 1:30 a.m. local time Saturday in the Pacific Ocean.

Trump said via Twitter that, "thoughts and prayers with the sailors of USS Fitzgerald and their families" and thanked Japanese officials for their help.

Thoughts and prayers with the sailors of USS Fitzgerald and their families. Thank you to our Japanese allies for their assistance. https://t.co/d1l5ctjNyB

An official statement from the White House has yet to be released.