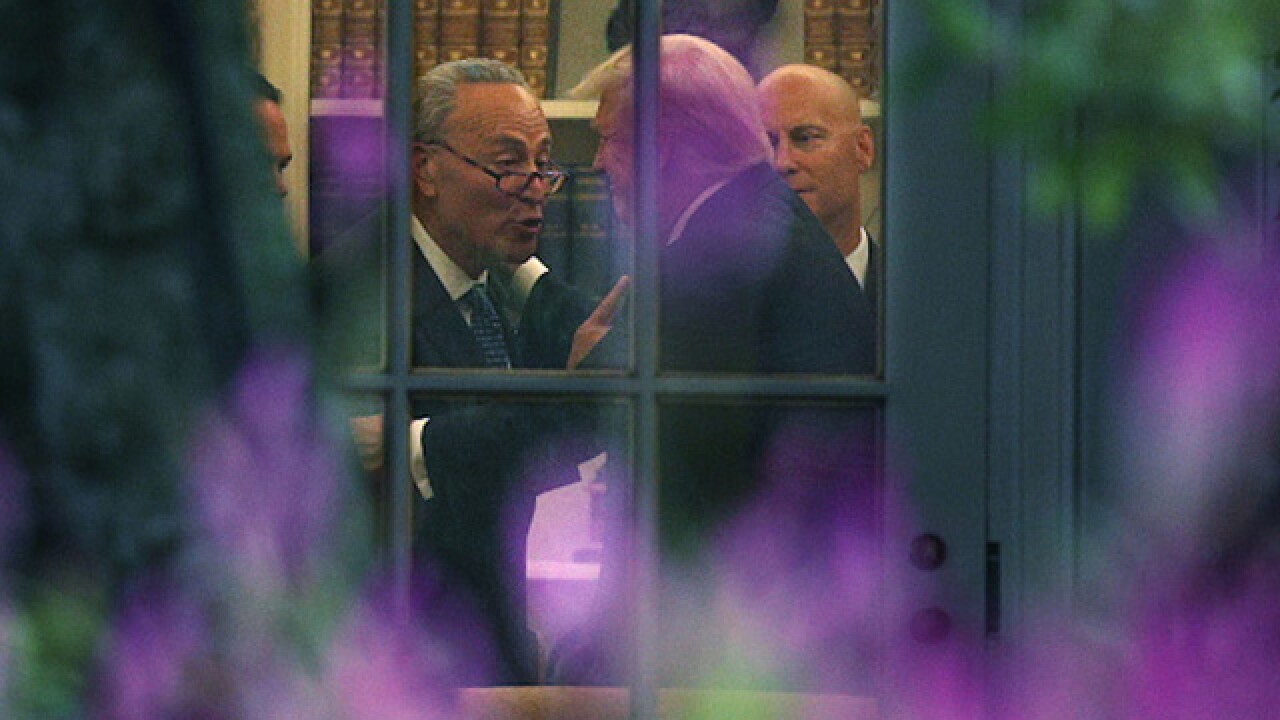 Image copyright 2018 Getty Images. All rights reserved. This material may not be published, broadcast, rewritten, or redistributed.
Alex Wong
<p>WASHINGTON, DC - SEPTEMBER 06: U.S. Senate Minority Leader Chuck Schumer (D-NY) (L) makes a point to President Donald Trump in the Oval Office prior to his departure from the White House September 6, 2017 in Washington, DC. President Trump is traveling to North Dakota for a tax reform event with workers from the energy sector. (Photo by Alex Wong/Getty Images)</p>

-- On the one-year anniversary of President Donald Trump's inauguration, the government shutdown after Senators failed to reach a deal over a spending bill. Now, the finger-pointing has started.

"Tonight, they put politics above our national security, military families, vulnerable children, and our country's ability to serve all Americans," White House press secretary Sarah Sanders said in a statement. "We will not negotiate the status of unlawful immigrants while Democrats hold our lawful citizens hostage over their reckless demands. This is the behavior of obstructionist losers, not legislators."

Senate Minority Leader Chuck Schumer, who GOP lawmakers have been naming the shutdown after, was quick to place the blame on President Trump.

"It's almost as if you were rooting for a shutdown," Schumer said from the Senate floor. "And now we will have one. And the blame should crash entirely on President Trump's shoulders."

Saturday, President Trump tweeted "Democrats are far more concerned with illegal immigrants than they are with our great military or safety at our dangerous Southern border. They could have easily made a deal but decided to play shutdown politics instead."

Democrats are far more concerned with Illegal Immigrants than they are with our great Military or Safety at our dangerous Southern Border. They could have easily made a deal but decided to play Shutdown politics instead. #WeNeedMoreRepublicansIn18 in order to power through mess!

-- Saturday, demonstrations as part of Women's March 2018 are expected to take place around the country.

Marches in San Diego, Los Angeles, New York, Washington D.C., and elsewhere will bring demonstrators out to raise awareness on various issues including women's rights, gender equality, sexual harassment and the "Me Too" movement, and more.

"I believe we need to continue to build on the momentum from last year's marches," Michelle Moge, who joined the march last year, told CNN. "I want to be part of the movement that helps change the world and I think showing up for events like this are a great way to do so."

Join us January 21st in Las Vegas for the official Women's March anniversary event kicking off our year-long #PowerToThePolls campaign to win in 2018! Get info, register, donate, or find a sister event near you: https://t.co/yekbsBO95T pic.twitter.com/9ODxmdwXiR

-- After a report forced calls for Missouri Gov. Eric Greitens to resign, the FBI is reportedly opening an investigation into the matter.

While the FBI has not formally announced the investigation, the St. Louis circuit attorney's office announced that it is investigating Greitens' conduct following news that forced the governor to acknowledge having had an extramarital affair and confront an allegation of blackmail, CNN reported.

The FBI told CNN it's a "long-standing" policy that the agency does not confirm or deny the existence of an investigation.

James Bennett, Greitens' lawyer, told CNN the governor "has not been contacted at any time by the FBI, and we are not aware of any interest by the FBI in this personal matter that took place years ago."