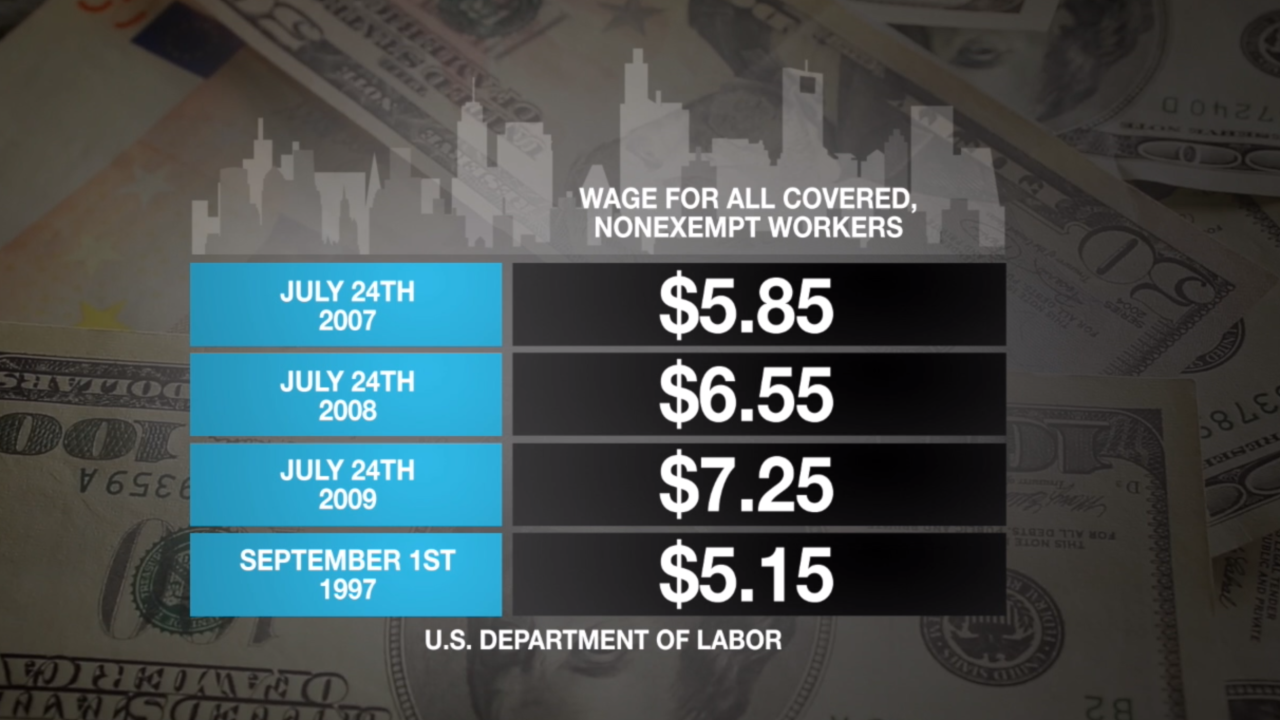 Katelynn Hudson started working at a fast-casual restaurant when she was 18 years old. It was her income as she tried to get herself through school, but minimum wage was not enough for her daily needs.

“I was not able to afford food for myself," she says. "I could not pay my rent, I couldn’t pay bus fare. It was very difficult, and if I couldn’t provide for myself. I wouldn’t be able to provide for a family."

Hudson now has a 2-and-a-half-year-old son, and she says she wouldn’t be able to support him if it wasn’t for a recent change in her pay. Illegal Pete’s in Denver, Colorado has raised its minimum wage from $9 to $15 within the past three and a half years, transforming that minimum wage into a living wage.

However, it doesn’t come without a cost.

“The biggest challenge is an immediate hit to your expense line, to your payroll line,” Turner said.

Turner says the last time he raised employee pay it cost him about $2 million. However, he sees it as an investment. The idea is to create a productive work environment, where people are more committed to the customer and the company. Pete says he’s saving money by not having excessive employee turnover.

Growing in store count and store volume with workers who stay, Turner says his decision to raise minimum wage has been worth it so far. But he does admit it hasn’t been easy. And for some small business owners, the idea while appealing, seems unrealistic.

“Everyone, I think, can agree that the minimum wage [needs] to be higher," says business owner Erika Righter. "However, in order for that to work, people need to then prioritize shopping locally."

Righter is the founder of Hope Tank in Denver. Everything the store sells is connected to a local grassroots organization, giving Righter a lot of experience with small businesses.

She says she would love to pay her workers more, but she thinks there’s a disconnect between the priorities of community and the way people spend their dollars.

“I think you can’t shop Amazon all the time, and want the minimum wage raised,” she says.

According to Righter, many local businesses pay their employees before themselves. She says there simply isn’t enough profit to pay them more, making an increase in minimum wage a bit of a concern.

“As the owner, I struggle to stay above water financially myself,” Righter says.

Robel Worku works for Colorado People’s Alliance, an organization that fights for justice in economic issues.

“I think the argument is that if those costs go up, it’s harder to keep their doors open,” Worku said.

Worku says COPA was recently able to help get a Colorado bill passed that gives authority to local governments to increase minimum wages.

“The federal minimum wage has stayed stagnant at around $7.25 for the past 10 or so years, and even beyond that hasn’t raised much within the past few decades,” Worku said.

Worku says his organization believes everyone should be afforded the right to earn a livable wage, which is around $20 per hour in Denver, Colorado. However, he understands that number changes from city to city, making it difficult to assess a specific amount for the federal minimum wage.

“I don’t know if there’s like a gold-standard number in mind, but one of the reasons we’re excited about the local wage option legislation is that it allows local governments to make those decisions for themselves,” Worku said.

So far, Worku says places that have raised minimum wage like Seattle and Chicago have seen an economic boost in the local economy.

“So for instance, if you run a restaurant or a bar, you rely on folks having a disposable income to be able to come spend,” he explained.

For Hudson, having a disposable income is a new comfort in her life. She says she’s very happy she can provide for her son and that money isn’t a giant cause of stress anymore.

“This is the first time in my life I have seen stability, and that’s really amazing for me to think of,” Hudson said.