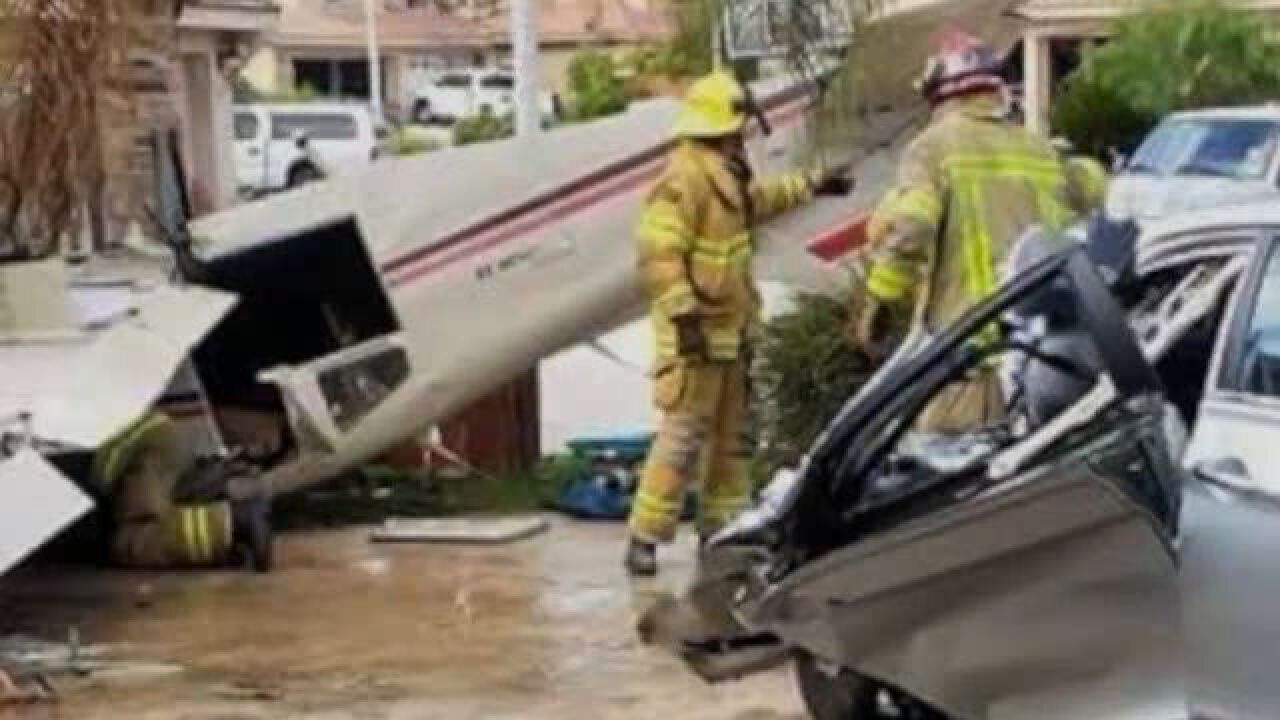 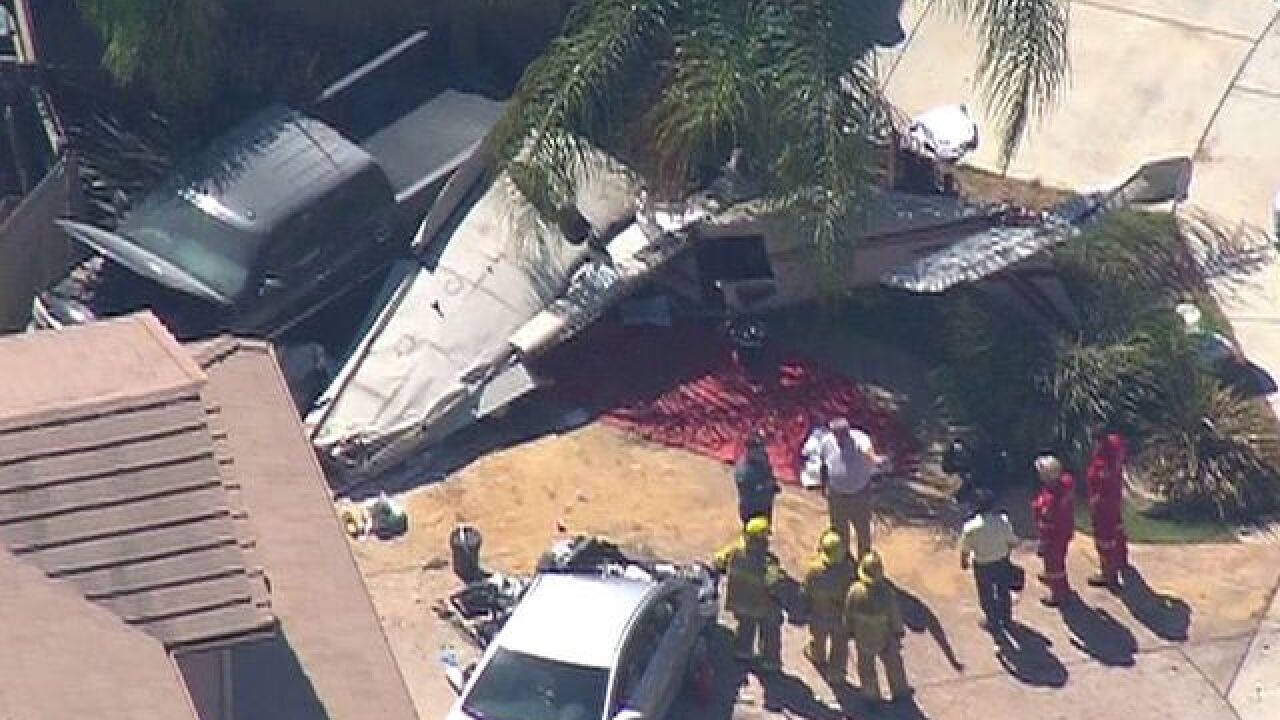 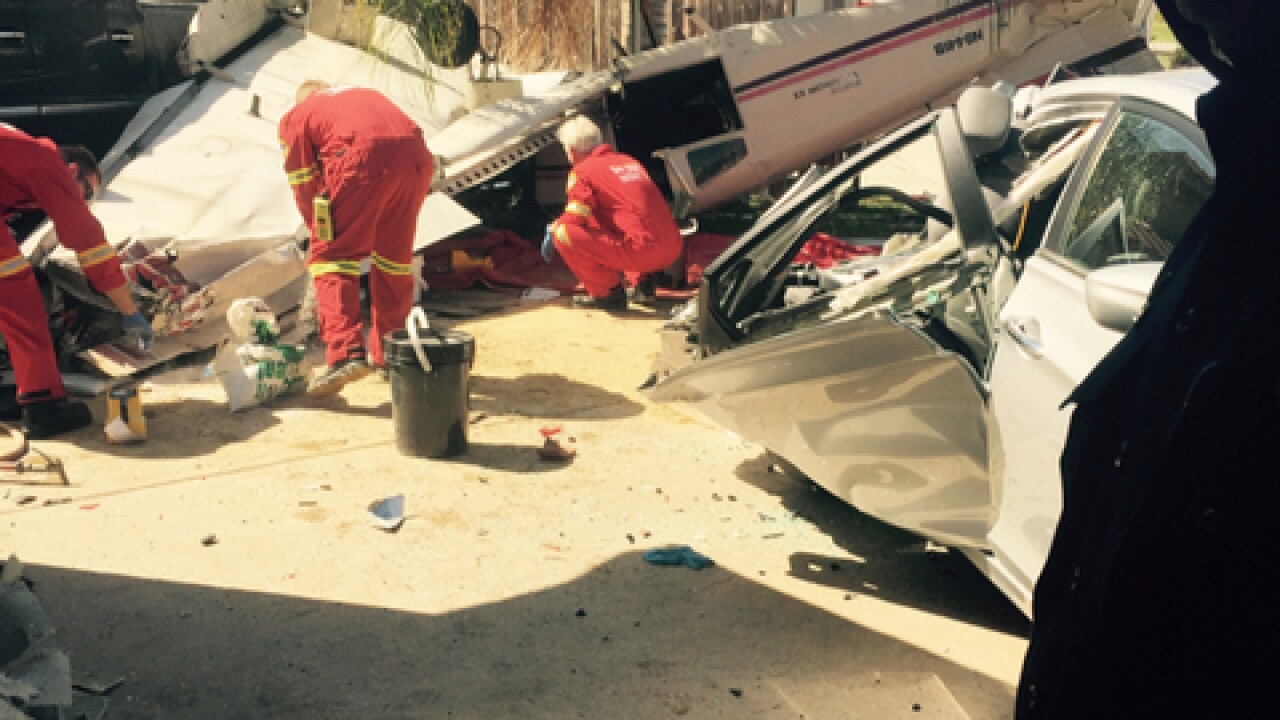 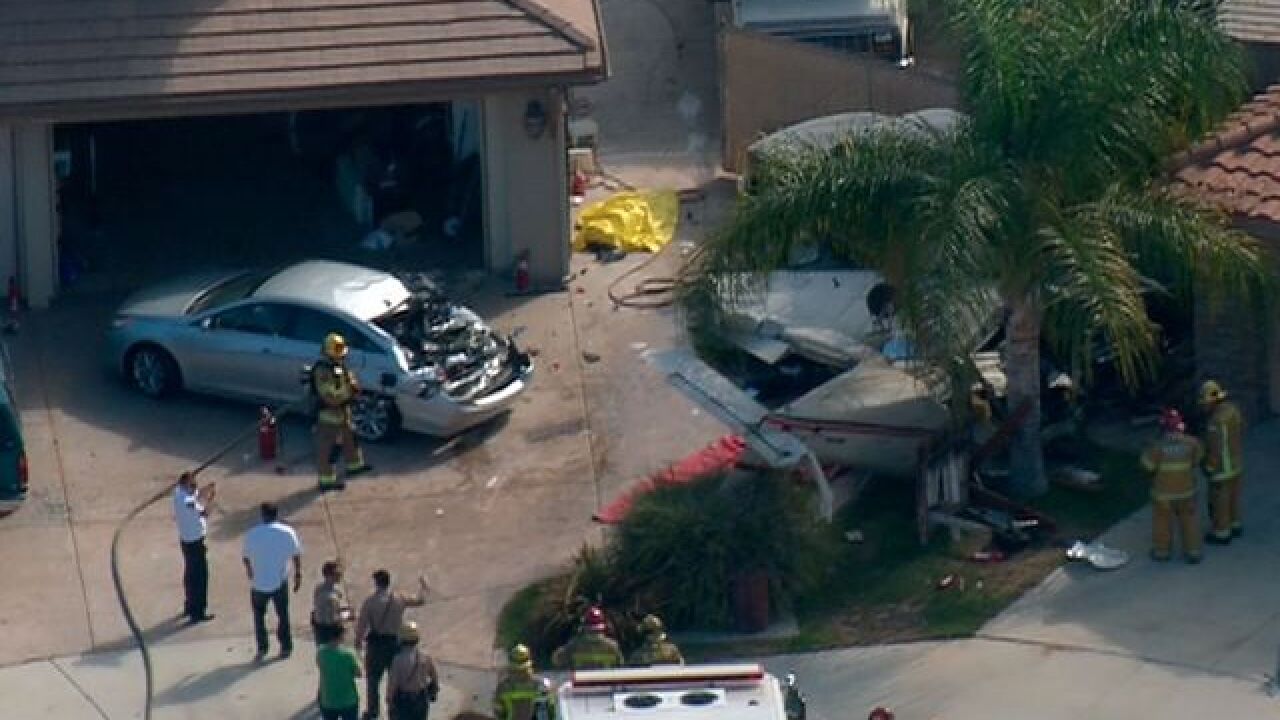 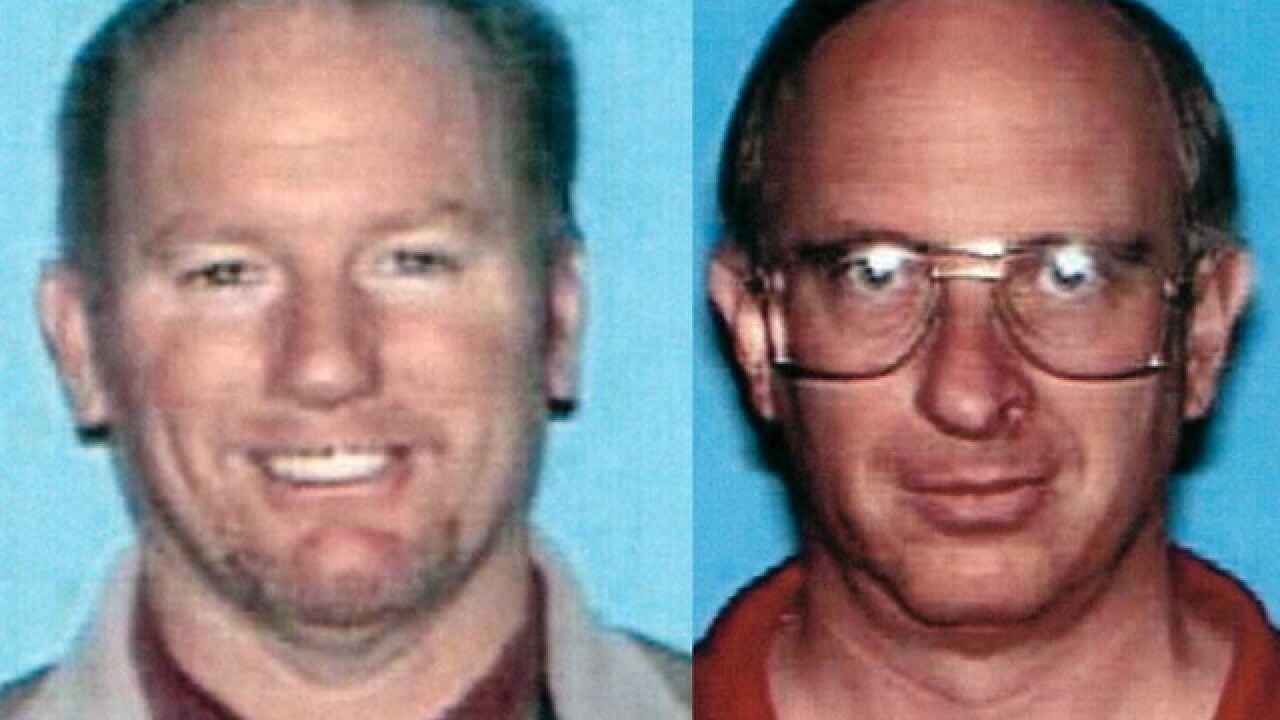 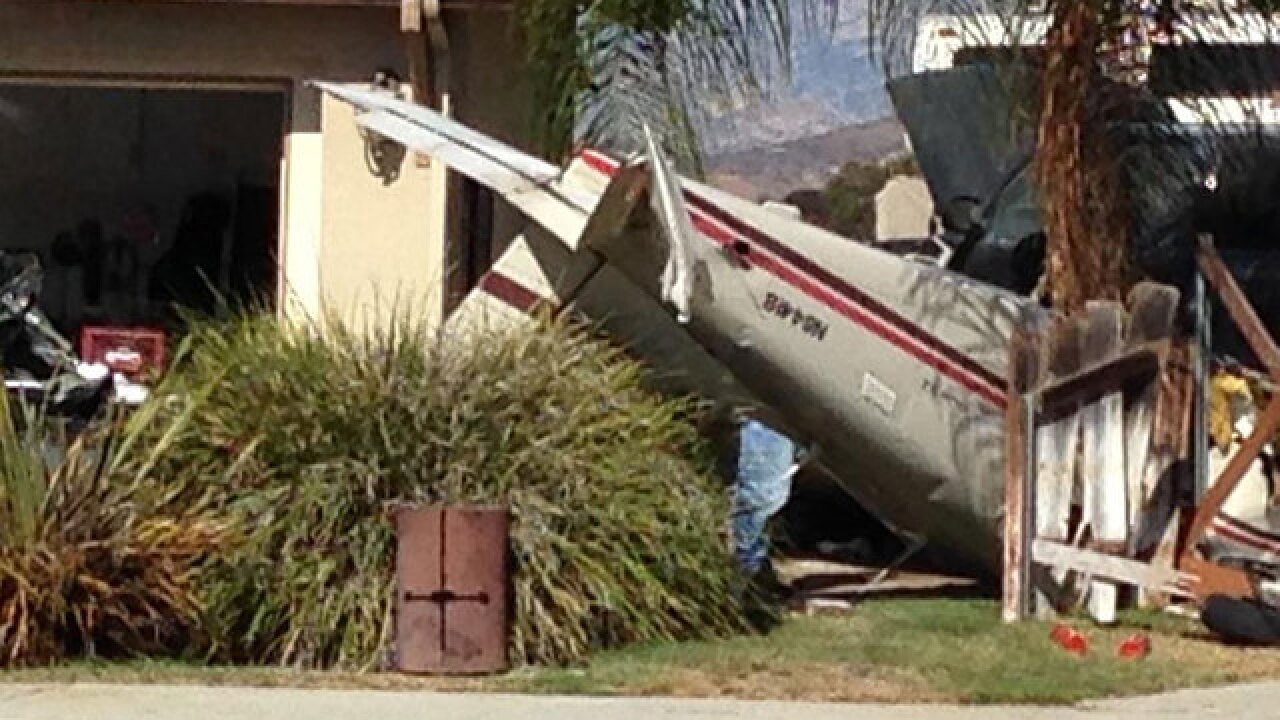 By: 10News Digital Team
Posted at 5:08 AM, Sep 11, 2015
SANTEE -- A sudden loss of power apparently caused a light plane to crash into a Santee neighborhood last week, killing both men aboard, according to a preliminary federal investigative report released Thursday.
Residents described hearing the engine of the Piper Cherokee quit as the fixed-wing aircraft crossed overhead about 9:15 a.m. Sept. 3, according to the National Transportation Safety Board document.
The witnesses said it sounded like the pilot was trying restart the motor as the plane dropped out of a steep bank and plummeted earthward.
Flight controllers received no mayday call from the aircraft before it went down on Corte de la Donna near Paseo de los Castillos, clipped the red-tile roof of a house, crashed onto a driveway, struck three parked vehicles, flipped over and caught fire, the NTSB reported.
Aviation instructor Robert Sarrisin, 59, of Rancho Penasquitos died inside the crumpled wreckage of the four-seat plane. Flight student Jeffrey Michael Johnson, 50, of El Cajon died in a hospital about an hour later.
No one on the ground was injured.
Investigators are unsure who was at the controls of the Cherokee as it was going down and quite likely will never be able to make that determination, NTSB spokesman Peter Knudson said.
Sarrisin and Johnson had been practicing takeoffs and landings with so-called "touch and go" maneuvers on a runway at nearby Gillespie Field in the minutes prior to the crash, officials said.
The wreckage of the plane, which is owned a corporation that operates El Cajon-based Golden State Flying Club, was taken to an Arizona facility for in-depth analysis.
A final report on the accident likely will be complete in about a year, Knudson said.

Here is the NTSB's preliminary findings:

On September 3, 2015, about 0915 Pacific daylight time, a single-engine Piper PA28-161 airplane, N8441B, struck the roof of a house, and came to rest inverted in a driveway in a residential area in Santee, California. Golden State Flying Club, El Cajon, California, operated the airplane as an instructional flight under the provisions of 14 Code of Federal Regulations Part 91.

The flight instructor and student pilot were fatally injured. The airplane sustained substantial damage during the accident sequence, and was also involved in a post-crash fire. Visual meteorological conditions prevailed for the local area traffic pattern flight, and no flight plan had been filed.

The airplane had just departed from Gillespie Field Airport (SEE), San Diego/El Cajon, California, runway 27R; the accident site was located about a ½ mile from the airport. According to the Federal Aviation Administration (FAA), tower personnel reported that the airplane had been conducting touch-and-go takeoffs and landings on runway 27R.

After completing the second touch-and-go landing, tower personnel stated that the airplane was on the upwind, when they observed the airplane make a left turn and descend rapidly toward the terrain west of the field. There were no mayday calls made by the pilot. Witnesses located at the accident site reported that the engine quit, and it appeared that the pilots were trying to restart the engine when the left wing struck the roof of a house.

The airplane then struck three vehicles, and came to rest inverted in a driveway abut a palm tree. A National Transportation Safety Board (NTSB) investigator responded to the accident site along with the FAA, and a Piper Aircraft air safety investigator. The entire airplane came to rest at the accident site; the left wing had separated from the airplane, but had come to rest on top of the right wing. The engine and engine mount remained attached to each other, but had separated from the airframe, and came to rest adjacent to the nose of the airplane.

The airplane was recovered with an inspection scheduled for a later date.