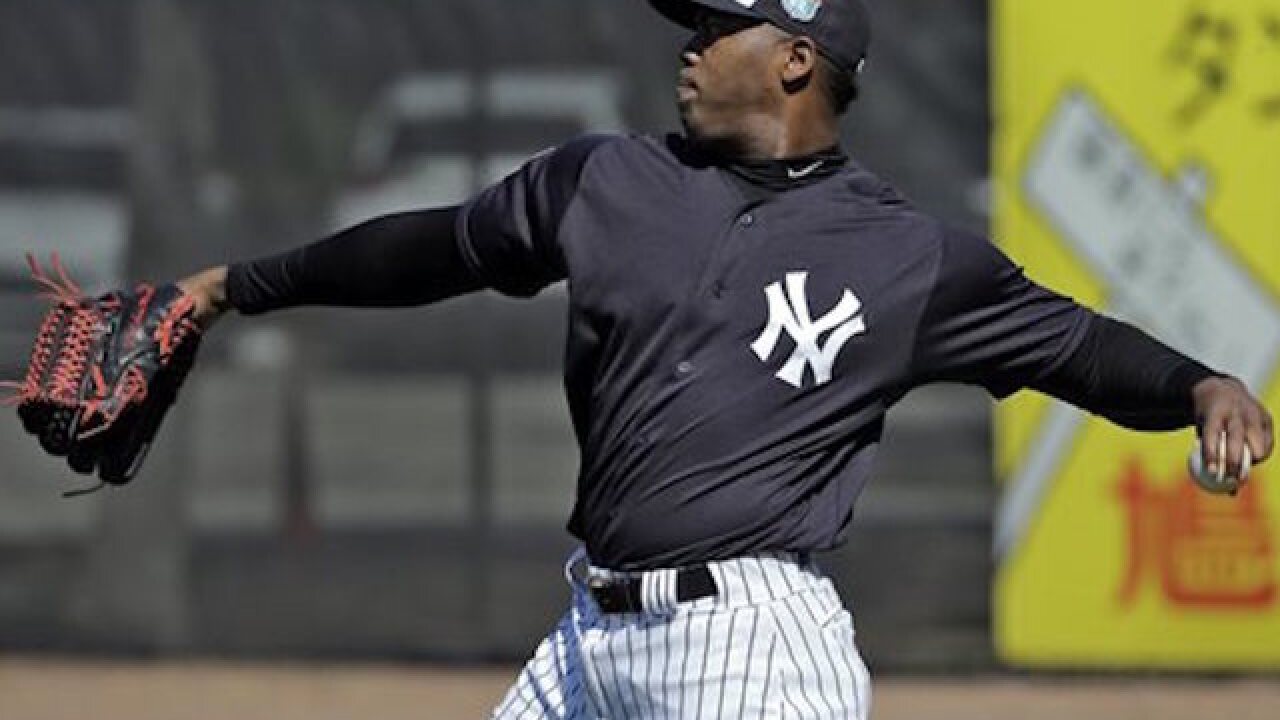 Chris O'Meara
<p>FILE - In this Feb. 19, 2016, file photo, New York Yankees pitcher Aroldis Chapman throws during a spring training baseball workout, in Tampa, Fla. Aroldis Chapman agreed to accept a 30-game suspension under Major League Baseballís domestic violence policy, a penalty stemming from an incident with his girlfriend last October. Under the discipline announced Tuesday, March 1, 2016, Chapman will serve the penalty from the start of the season in April.(AP Photo/Chris O'Meara)</p>

Under the discipline announced Tuesday, the four-time All-Star will serve the penalty from the start of the Yankees' season on April 4. He will lose 30 days of pay — $1,856,557 of his $11,325,000 salary. The agreement specifies he will be eligible for free agency after this season barring any additional suspension for off-the-field conduct that would cost him the necessary service time.

"I found Mr. Chapman's acknowledged conduct on that day to be inappropriate ... particularly his use of a firearm and the impact of that behavior on his partner," baseball Commissioner Rob Manfred said in a statement. "I am gratified that Mr. Chapman has taken responsibility for his conduct."

Chapman became the first player penalized a finite number of games under the policy, which MLB and the players' association agreed to in August following several high-profile incidents among NFL players. Colorado shortstop Jose Reyes was given an indefinite paid suspension last week, pending a trial scheduled for April 4, following an alleged altercation with his wife in October.

Baseball's investigation of Chapman stemmed from an Oct. 30 incident at his house in Florida. Chapman's girlfriend, 22-year-old Cristina Barnea, told police he pushed and choked her. Chapman said there was an argument but that he was pushed down by Barnea's brother, eventually getting a handgun and firing eight shots into a wall and window while locked in his garage.

The Davie Police Department and Broward Assistant State Attorney Stefanie Newman declined to file charges, saying conflicting accounts and insufficient evidence made a conviction unlikely. Under MLB's domestic violence policy, discipline does not have to be predicated on a conviction.

Chapman, 28, the hardest-throwing pitcher in the major leagues, was traded from the rebuilding Cincinnati Reds to the Yankees in December. He had said he would contest any suspension, but a deal was reached following negotiations with MLB.

"I want to be clear, I did not in any way harm my girlfriend that evening," Chapman said in a statement. "However, I should have exercised better judgment with respect to certain actions, and for that I am sorry. The decision to accept a suspension, as opposed to appealing one, was made after careful consideration. I made this decision in an effort to minimize the distractions that an appeal would cause the Yankees, my new teammates and most importantly, my family."

Chapman's representatives and MLB had been discussing the discipline for about 10 days. A suspension of 46 days or longer would have delayed his chance to become a free agent until after the 2017 season.

The players' association said it supported Chapman's decision to accept the penalty and said "its members do not condone the mistreatment of others by playing or non-playing personnel."

With the Yankees, Chapman forms a powerful back end of the bullpen along with former closer Andrew Miller and Dellin Betances.

Chapman can continue to participate in all spring training activities. The penalty starts when the Yankees open the season April 4 at home against Houston. Barring rainouts, he would be eligible to start his season May 9 when the Yankees host World Series champion Kansas City.

"We need him," teammate Alex Rodriguez said Tuesday before the suspension was announced. "He's a big part of our team, and I think the key in New York is you have to focus on the game, focus on your teammates, and I think he has a lot of support in that clubhouse."

Chapman will be allowed to use team facilities while serving his suspension and likely will work out at the Yankees' minor league complex in Florida, but he will not be permitted to play in any minor league games during that time.

Los Angeles Dodgers outfielder Yasiel Puig is under investigation by MLB for a fight with a bouncer at a Miami bar in November following an argument with his sister.