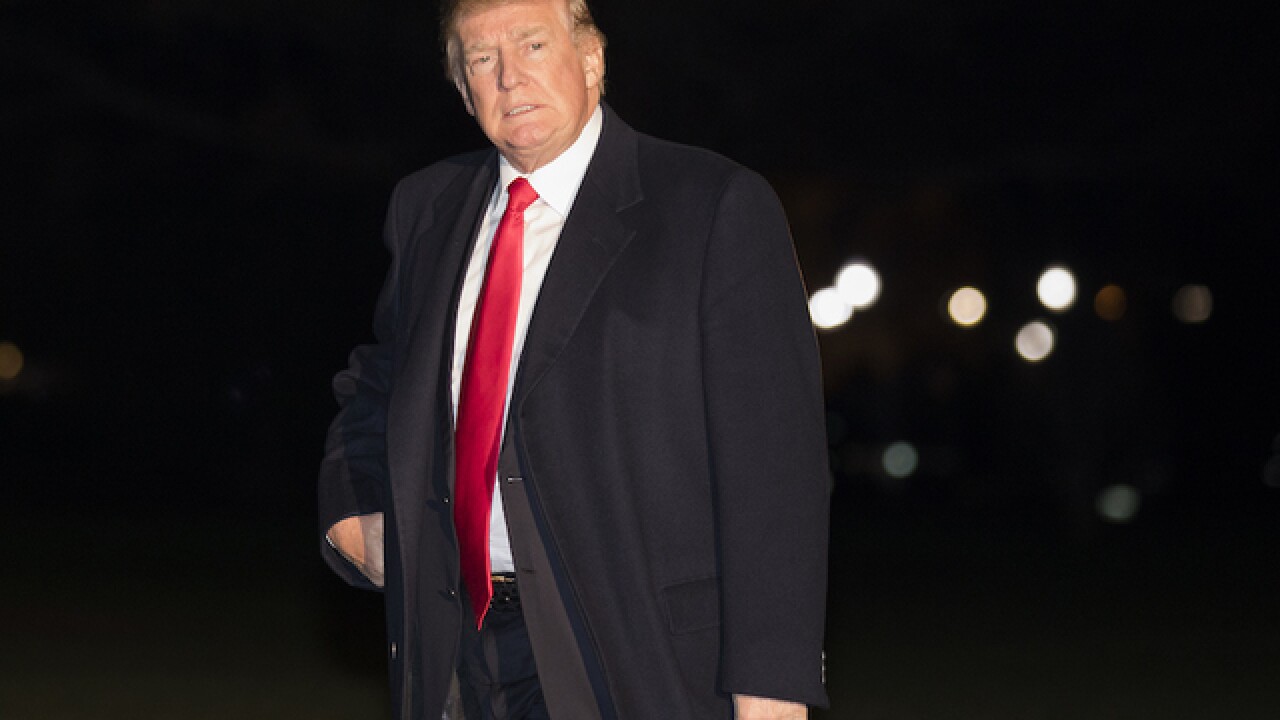 Copyright Getty Images
Pool
<p>WASHINGTON, DC - DECEMBER 10: President Donald Trump returns to the White House in Marine One on December 10, 2017 in Washington, DC. Trump is returning after a weekend in Mar-a-Lago, Florida. Earlier in the day, US ambassador to the United Nations Nikki Haley said that women who have accused President Trump of sexual harassment 'should be heard.' (Photo by Jim Lo Scalzo-Pool/Getty Images)</p> 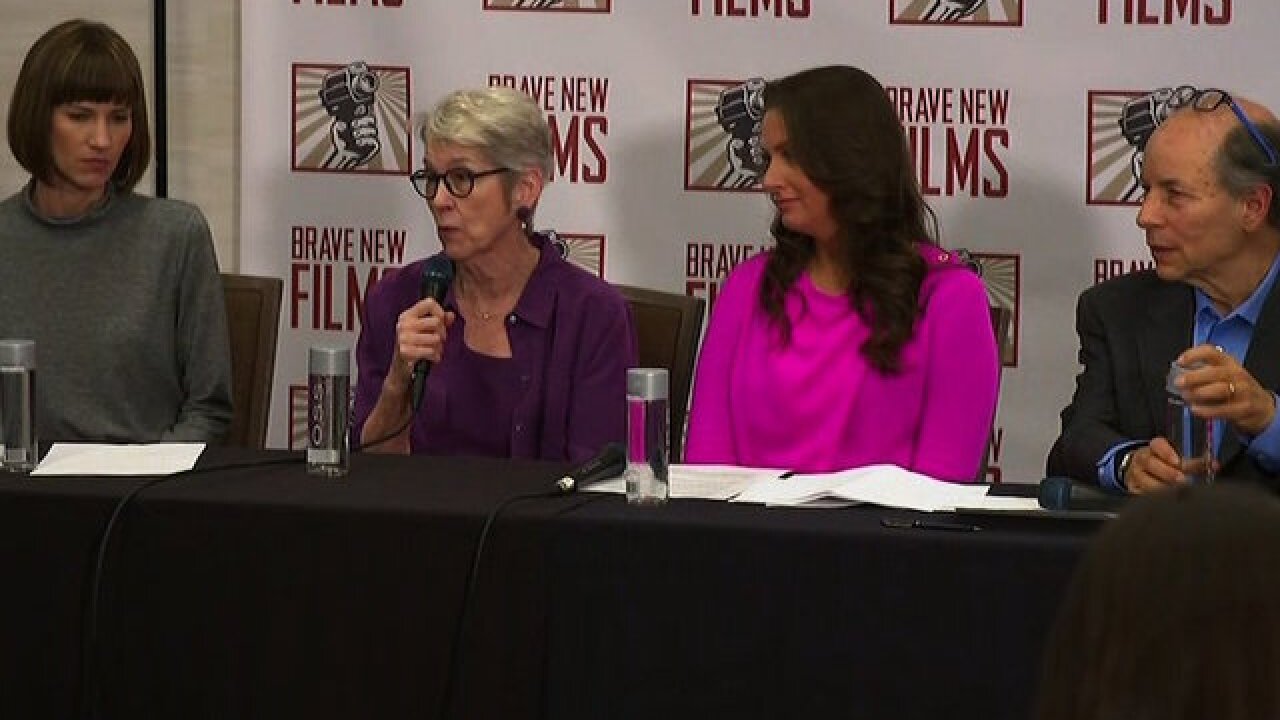 A group of women who have publicly accused President Donald Trump of sexual harassment and assault detailed their accounts of being groped, fondled and forcibly kissed by the businessman-turned-politician at a news conference on Monday.

"This was serial misconduct and perversion on the part of Mr. Trump. Unfortunately, this behavior isn't rare in our society, and people of all backgrounds can be victims. The only reason I am here today is that this offender is now the President of our country," said Rachel Crooks, a former Bayrock Group receptionist who accused Trump of kissing her on the mouth without her consent in 2005.

Trump denied the allegations in a tweet on Tuesday morning.

Despite thousands of hours wasted and many millions of dollars spent, the Democrats have been unable to show any collusion with Russia - so now they are moving on to the false accusations and fabricated stories of women who I don’t know and/or have never met. FAKE NEWS!

Samantha Holvey, the former Miss North Carolina 2006 who has accused Trump of inspecting beauty pageant contestants, and Jessica Leeds, who has accused the President of grabbing her chest and attempting to move his hand up her skirt on a flight, also sat with Crooks at Monday's event.

The firsthand accounts come as a public conversation on sexual assault and harassment -- spurred by a series of accusations against high-profile figures in politics, Hollywood and journalism -- rages throughout the United States. Brave New Films, a production company that realized a film on the women who have accused Trump of sexual assault, hosted the event.

At least 13 women have come forward with accusations against Trump ranging from sexual harassment and misconduct to sexual assault, including unwanted kissing and groping. All the alleged incidents took place prior to his assuming the presidency.

Crooks called on Congress to "put aside party affiliations and investigate Trump's history of sexual misconduct."

"In an objective setting, without question, a person with this record would have entered the graveyard of political aspirations, never to return," she said. "Yet here we are with that man as President."

Leeds added that while some areas of society are "being held accountable for unwanted behavior ... we are not holding our President accountable for what he is and who he is."

Trump has vehemently denied the accusations.

"The events never happened. Never. All of these liars will be sued after the election is over," Trump said months before the 2016 election in Gettysburg, Pennsylvania. Trump, however, has never filed a lawsuit against the accusers.

Though White House press secretary Sarah Sanders would not go on the record Monday, she has previously said the White House's position is that all the women are lying.

"Yeah, we have been clear on that from the beginning and the President has spoken on it," Sanders said in October.

"The President has spoken about this multiple times throughout the campaign and has denied all of those allegations," Sanders said in November.

Trump opened the floodgates of accusations against him during the 2016 campaign when he downplayed the release of a 2005 "Access Hollywood" video that showed him saying he was able to "grab them by the p**sy" because he was famous.

Trump downplayed his remarks as nothing more than "locker room talk" at the second presidential debate and said he never kissed or groped women without consent.

But not all those close to the President have been so dismissive.

US Ambassador to the United Nations Nikki Haley said Sunday that women who accuse a man of inappropriate sexual behavior -- including Trump -- "should be heard."

"Well, I mean, you know, the same thing, is women who accuse anyone should be heard," Haley said when asked specifically about Trump's accusers. "They should be heard and they should be dealt with. And I think we heard from them prior to the election. And I think any woman who has felt violated or felt mistreated in any way, they have every right to speak up."

The renewed focus on Trump's accusers comes as Alabama Senate candidate Roy Moore fights to win a reliably Republican seat, despite accusations he pursued relationships with teenagers, including molesting a 14-year-old and sexually assaulting a 16-year-old when he was in his 30s. Moore has denied all the allegations.

Trump has stood by Moore despite the accusations and has raised questions about the women who have leveled the charges. Trump traveled to Florida -- just miles from the Alabama border -- to rally support for the Senate candidate and has repeatedly tweeted about the need to back Moore and keep his Democratic opponent Doug Jones out of the Senate.

Two Democratic senators -- Cory Booker of New Jersey and Jeff Merkley of Oregon -- called for Trump to resign over the multiple accusations of sexual harassment and sexual assault against him.

The calls come days after Sen. Al Franken, a Minnesota Democrat, announced his intention to resign over accusations of sexual assault.

"I just watched Sen. Al Franken do the honorable thing and resign from his office," Booker said. "My question is, why isn't Donald Trump doing the same thing -- who has more serious allegations against him, with more women who have come forward. The fact pattern on him is far more damning than the fact pattern on Al Franken."