With a signature, Trump brings Space Force into being 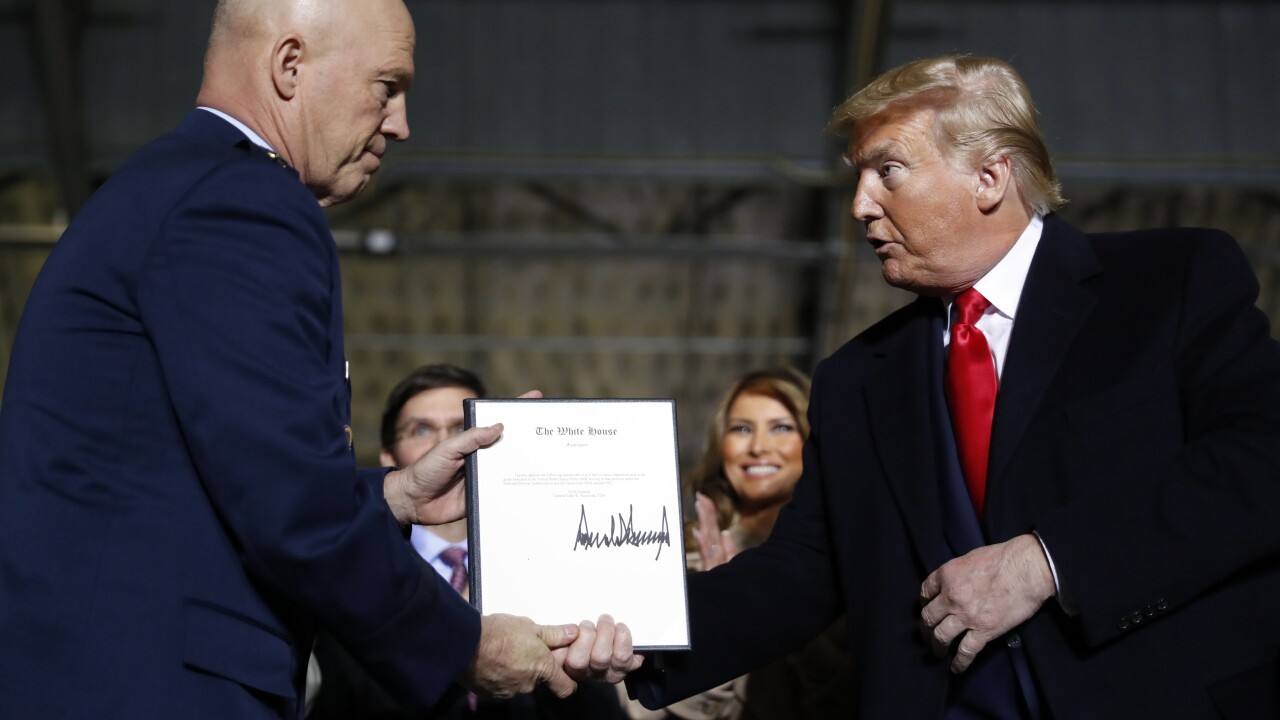 When President Donald Trump signed the National Defense Authorization Act into law Friday, he also created the newest military service and the first new service since the US Air Force came into being in 1947.

With his signature, the US Air Force Space Command was designated the United States Space Force, a step that White House officials are touting as a historic step.

Raymond said that the 16,000 active duty airmen and civilians currently in the Air Force Space Command will be assigned to the new United States Space Force, though officials made clear those personnel will not actually become members of the Space Force and will remain in the Air Force for the time being.

A senior US Air Force official said that some 5,000 to 6,000 personnel out of the 16,000 will eventually be transferred to the Space Force.

The military service members that focus on space, space operators, will eventually be transferred to the Space Force on a voluntary basis at some point in the future, officials say. Support personnel, such as security officers and civil engineers, will remain in the Air Force even though they are assigned to the Space Force.

"We want to build this service to be lean and agile, we're going to rely very heavily support functions from the Air Force," Raymond said Friday.

A relatively small number of airmen that specialize in intelligence, engineering and acquisition will also be transferred to the new Space Force.

Air Force officials said that the number of personnel transferred to the Space Force could reach 15,000.

"There will be additional segments to come, so for example there might be other units that are outside of Air Force Space Command purview that would also come into this service as well," Raymond said.

A force total of about 15,000 is quite small when compared to the other branches of the armed forces.

The US Air Force has over 300,000 active personnel in its ranks, while the US Marine Corps, hitherto the smallest branch, has some 180,000.

Air Force Secretary Barbara Barrett, who will oversee the new service much as the secretary of the Navy oversees the US Marines, said that the new branch's size does not reflect its significance.

She pointed to the fact that only about 40 personnel oversee the tremendously important Global Positioning System (GPS), despite its critical importance to both the US government and commercial enterprise.

The Air Force will also provide much of the infrastructure to support the new Space Force, including its officer training and recruiting programs. Officials say this will help stem the need for additional bureaucracy.

The desire to avoid adding additional bureaucracy to the Defense Department was one reason that senior defense officials previously voiced opposition to proposals to create a new military branch focused on space.

"We do have a plan to rename the principal Air Force bases that house space units to be Space Bases," Raymond said. He added "that will occur in the months ahead and we'll plan that appropriately."

He said those bases could include Peterson Air Force Base in Colorado, the current home of Air Force Space Command, and Vandenberg Air Base in California.

An Air Force memorandum obtained by CNN in April identified the six military bases that could house US Space Command. Four of the proposed locations were located in Colorado. The other two locations were in Alabama and California.

A few things that will not be unveiled when Trump signs the Space Force into law on Friday night include Space Force uniforms, logos and songs.

"There are, as you can imagine, thousands and thousands of actions that are going to have to take place, everything from what does the uniform look like, to the logo, all the way up to who's in the Space Force and who's not in the Space Force," Raymond said. "That work is being planned and will continue to be refined."

Raymond added that "it's going to be really important that we get this right. A uniform, a patch, a song, it gets to the culture of a service and so we're not going to be in a rush to get something and not do that right."

"There's a lot of work going on towards that end, I don't think it's going to take a long time to get that done, but that's not something that we're going to roll out on day one," he added.

Some lawmakers have questioned the need for a separate Space Force and the amount of money allocated to its creation in Fiscal Year 2020 -- $40 million -- was significantly less than the $72.4 million sought by the Pentagon.

"We will phase development according to what the budget provides. Yes, it was less than requested, but we will quite ably work with the amount that was appropriated," Barrett said.