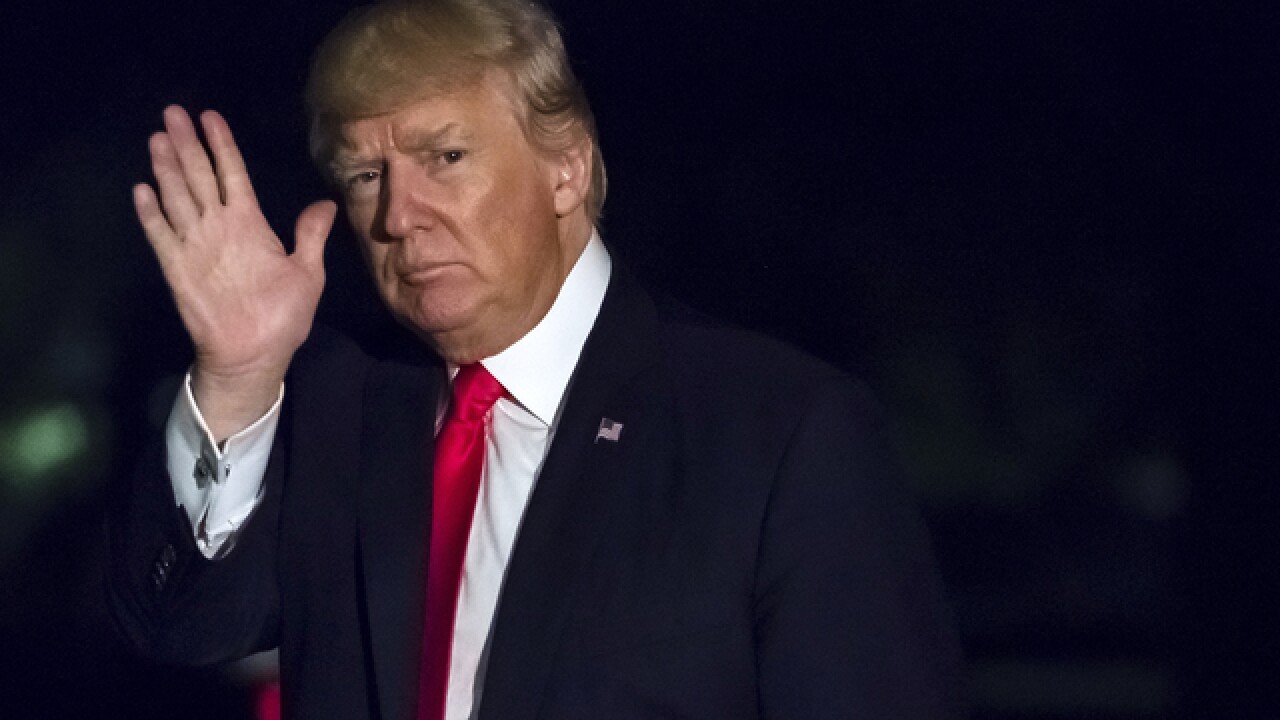 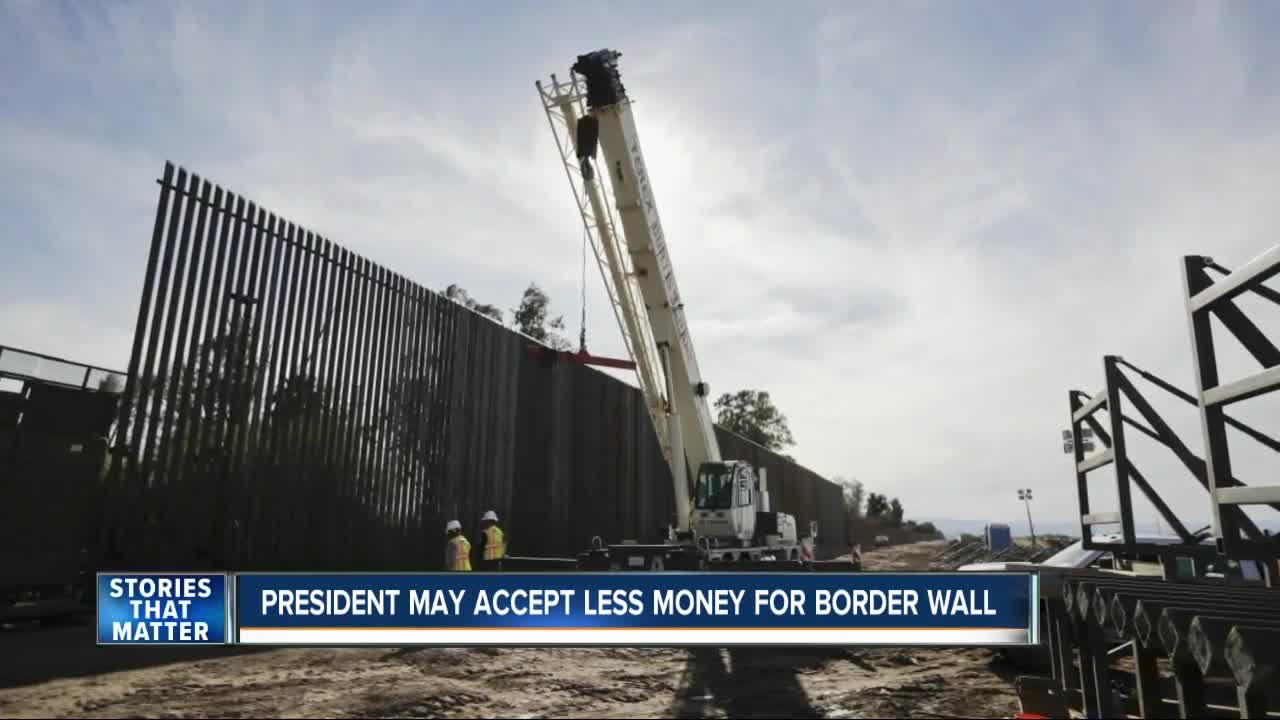 WASHINGTON (AP) - President Donald Trump is meeting with the Homeland Security secretary on Monday as the partial government shutdown over his U.S.-Mexico border entered Christmas without a clear resolution in sight.

While both sides are trading offers to end the stalemate, they remain far apart, and a top White House official warned the shutdown could stretch into January.

Acting White House chief of staff Mick Mulvaney, who is also the budget director, said he was waiting to hear from Senate Democratic leader Chuck Schumer of New York about a counteroffer the White House presented Schumer over the weekend.

Mulvaney would only say the offer was between Trump's $5.7 billion request and $1.3 billion Democrats have offered.

"We moved off of the five and we hope they move up from their 1.3," Mulvaney said less than a day after a senior administration official insisted that Congress would have to cave into Trump's demand for the shutdown to end, highlighting Trump's unpredictable negotiating style.

A Democratic aide granted anonymity to discuss the private talks confirmed the offer from the White House on Saturday was $2.5 billion -- an initial $2.1 billion plus $400 million Democrats called a "slush fund" for the president's other immigration priorities.

But Democrats said the administration has given mixed signals, and it's unclear what Trump would actually accept. A spokesman for Schumer's office said the parties remained "very far apart."

The White House said Trump would meet Monday afternoon with and DHS Secretary Kristjen Nielsen and other department officials "to discuss border security."

Meanwhile, Senate negotiators are continuing talks behind the scenes with Democrats and Republicans. The House and Senate gaveled into session for a few minutes on Christmas Eve before quickly closing again with no further action.

Sen. Dick Durbin, D-Ill., argued for increased use of technology along the border instead of "some medieval wall." Asked whether he's willing to offer more money as long as it is not spent on a wall, Durbin responded: "Absolutely."

Trump blamed the Democrats for the stalemate on Monday, tweeting, "Virtually every Democrat we are dealing with today strongly supported a Border Wall or Fence. It was only when I made it an important part of my campaign, because people and drugs were pouring into our Country unchecked, that they turned against it. Desperately needed!"

However, an AP Fact Check found that U.S. arrests on the Mexican border jumped 78 percent in November from a year earlier to the highest level in Trump's presidency. Increased arrests indicate that more people are trying to cross the border illegally.

Parts of the government have been closed since Saturday after funding for numerous departments and agencies expired. The closure affects hundreds of thousands of federal workers across the country and was expected to last at least through Thursday, when the House and Senate meet again.

Monday and Tuesday, Christmas Eve and Christmas, respectively, are federal holidays, meaning the government would have been closed anyway. That means Wednesday is the first day the public could begin to feel the effects of lost government services, Mulvaney said.

Mulvaney predicted the shutdown could go into January, when Democrats assume control of the House.

"It's very possible that this shutdown will go beyond the 28th and into the new Congress," he said.

Justin Goodman, a spokesman for Schumer, countered: "If Director Mulvaney says the Trump Shutdown will last into the New Year, believe him, because it's their shutdown." Trump recently declared he'd be "proud" to shut down the government over border issues.

Democrats held firm Sunday in opposition to a wall, which Trump promised his political base he would build. Mulvaney said "the president's not going to not accept money for a border wall."

Trump tweeted Sunday, the shutdown's second day, that what's needed is "a good old fashioned WALL that works," not aerial drones or other measures that "are wonderful and lots of fun" but not the answer to address drugs, gangs, human trafficking and other criminal elements entering the country.

He put off plans to spend Christmas at his Florida estate and remained in Washington.

The routines of about 800,000 federal employees, meanwhile, were about to be disrupted.

More than half of those employees are deemed essential, such as U.S. Secret Service agents and Transportation Security Administration airport agents, must work without pay, though retroactive pay is expected. Another 380,000 were to be furloughed, meaning they will not report to work but would be paid later. Legislation ensuring that workers receive back pay was expected to clear Congress.

Trump had savored the prospect of a shutdown over the wall, saying he'd be "proud" to force one over an issue that was one of his biggest campaign promises. He had said he wouldn't blame Democrats for a shutdown but now blames them for not contributing to the 60 votes needed for such legislation to clear the closely divided Senate.

But Democrats aren't the only ones resisting Trump on the wall. Republican Sen. Bob Corker of Tennessee, who is leaving Congress in January and has criticized Trump on other issues in the past, called the border-wall fight a "made-up fight so the president can look like he's fighting."

"This is something that is unnecessary. It's a spectacle. And, candidly, it's juvenile. The whole thing is juvenile," Corker said, arguing for measures that he said would secure the border better than a wall.

Mulvaney appeared on "Fox News Sunday" and ABC's "This Week." Durbin spoke on NBC's "Meet the Press" and Corker was interviewed on "State of the Union" on CNN.