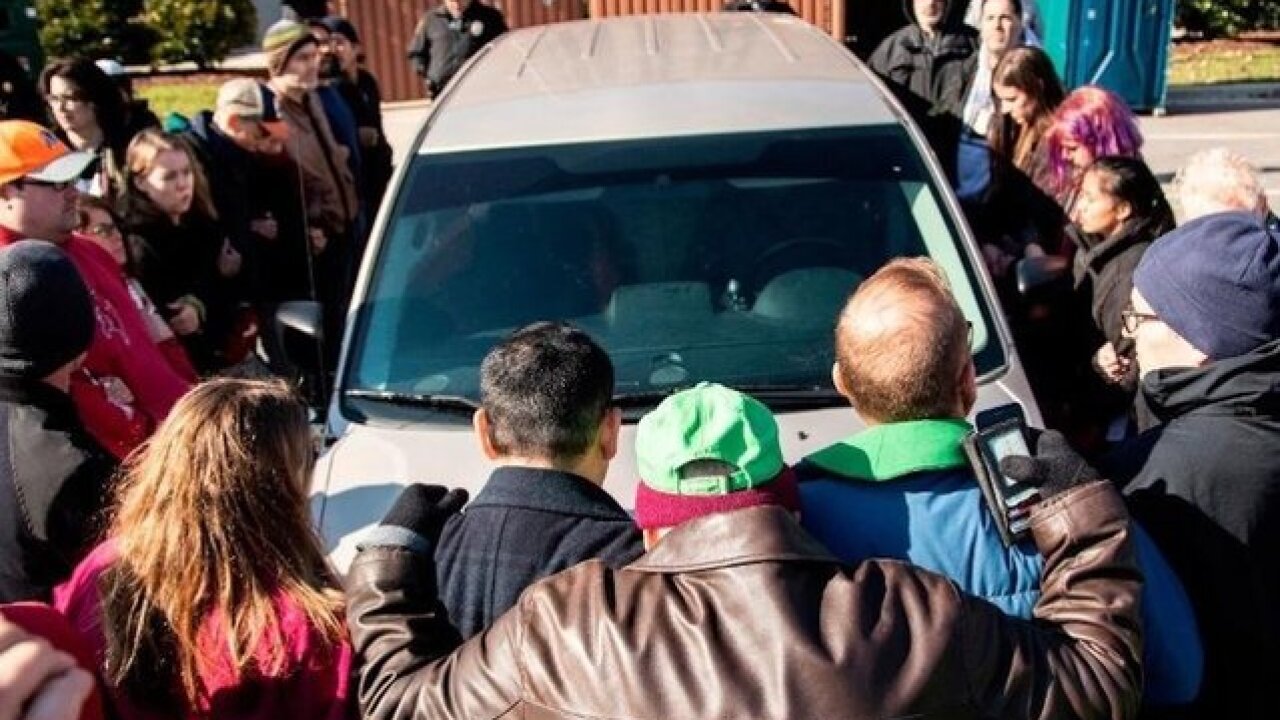 Oliver-Bruno had an appointment with immigration officials to provide fingerprints and discuss a petition to delay his deportation. He was accompanied by faith leaders and other supporters Friday for the 13-mile trip to the offices in the Raleigh-area.

About 20 minutes after he walked into the offices of US Citizenship and Immigration Services, agents dressed in plainclothes arrested him.

Faith leaders and church members quickly formed a human wall around the vehicle taking him to detention, and would not leave.

They locked arms around the agents' unmarked gold-colored van and prayed for about two hours. They sang "Amazing Grace" and other worship songs.

"Let him stay!" they yelled. "Let your people go!"

Pastor: Appointment was 'a bait'

"Mr. Oliver-Bruno is a convicted criminal who has received all appropriate legal process under federal law, has no outstanding appeals, and has no legal basis to remain in the US," Cox said.

The people who accompanied him did not follow orders to disperse, and 27 of them were arrested without incident, the Morrisville Police Department said.

Pastor Cleve May said church members were fearful this might happen.

"It was presented as a legitimate appointment but ICE utilized due process as bait," May said. "So we went to the appointment with him, to offer protection, knowing that ICE could not be trusted. We were thinking we would be in and out in 30 minutes."

He's been arrested at the border

Oliver-Bruno was born in Veracruz, Mexico and came to the United States more than 20 years ago to live in Greenville, CNN affiliate WRAL reported.

In 2014, Oliver-Bruno was arrested in El Paso, Texas, after he attempted to enter the US using a Texas birth certificate, court documents show.

He later admitted that he was a Mexican national and had paid $1,000 for the document. Oliver-Bruno's case has been subject to extensive appeals since then, Cox said.

To avoid deportation, he lived at CityWell United Methodist Church in Durham, North Carolina, for 11 months. ICE generally avoids arrests at "sensitive locations" such as houses of worship.

Oliver-Bruno fears he'll be deported and leave behind his son and his wife, who suffers from Lupus and other medical conditions, the affiliate reported.

Last year, the CityWell United Methodist Church agreed to take him in but the building wasn't ready for him. He helped with the renovations, including building a bedroom and a shower.

During his time at the church, he attended classes to learn English as a second language, played guitar and read during services.

With the help of community members, Oliver-Bruno, who is an aspiring baptist minister, continued his studies at Duke University's Divinity School after his class agreed to meet at the church, advocacy group Alerta Migratoria said.

But the uncertainty and the wait would also get to him.

"As I continued cooped up, sometimes I feel the need to be free. I need to work, do the activities I used to do, to afford medicines for my wife and doctor's appointments," he said in a video posted by advocates days before his arrest.

"I need to work to support her (wife) and my son."

His arrest means others who've sought sanctuary at other churches are not safe either, advocates said.

"If people can't take try these kinds of attempts at stopping their deportation, if this is going to be disrespected, what can we expect?" said Viridiana Martinez with Alerta Migratoria. "What are they supposed to do?"

Congressmen David Price and G.K. Butterfield said they are "extremely alarmed" by the detention, and accused the immigration agencies of coordinating the arrest.

"It appears ICE has acted in concert with officials at USCIS, who instructed Mr. Oliver-Bruno to appear at local USCIS offices to discuss his deferred deportation," the lawmakers said in a statement.

"At best, Mr. Oliver-Bruno was presented with a catch-22 dilemma; at worst, he was entrapped," they added."

Oliver-Bruno will not be immediately deported. The congressmen said ICE has committed to allow him to remain in US detention while his case is adjudicated.