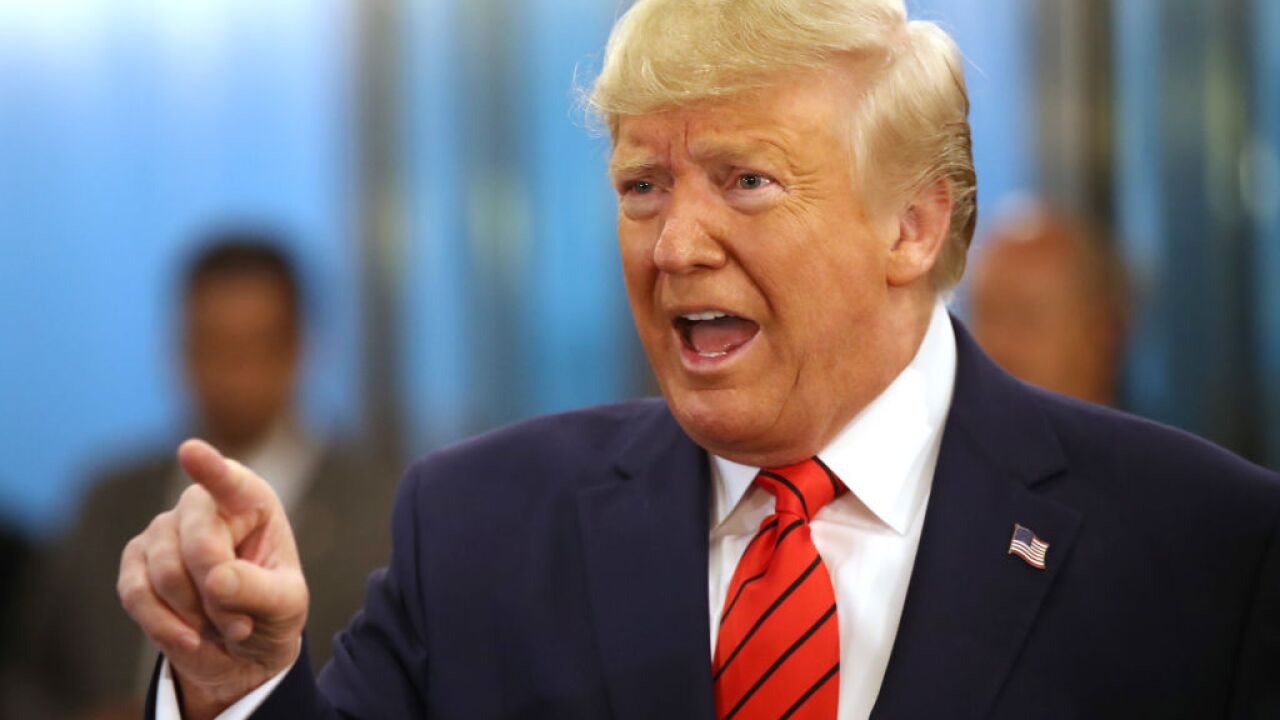 As President Donald Trump tries to elude oversight in Congress for his actions, including recent dealings with Ukraine, Trump's personal lawyers have made a far-reaching claim that could remove a judicial check on a president's alleged transgressions.

Trump's lawyers have argued in a federal case to be heard Wednesday that the Constitution shields the president from any criminal investigation -- not just from actual prosecution -- while he holds office.

In the 1990s, Kavanaugh was on independent counsel Ken Starr's team that spurred the impeachment of President Bill Clinton. But Kavanaugh, who Trump nominated to the bench last year, said that after he worked for President George W. Bush, he saw the need to protect the presidency from the criminal process.

It is difficult to predict how Kavanaugh and fellow conservative justices who constitute the majority on the US Supreme Court would rule on Trump's assertion of complete immunity from the criminal process. But accepting it would defy court precedent and basic constitutional principles.

"The government was founded in resistance to a king who claimed absolute power. The Constitution was framed so that no one person, even the president, is above the law," said University of Georgia constitutional law professor Diane Marie Amann.

With House Speaker Nancy Pelosi's announcement Tuesday of a formal impeachment inquiry, Trump appears to face the greatest threat right now from the US House of Representatives. But history has demonstrated that litigation against a president can be of significant consequences. It was a court decision requiring President Richard Nixon to turn over Oval Office tapes incriminating him in the Watergate scandal that ultimately ended his presidency.

The Trump case to be heard Wednesday in New York arises from the President's effort to block a state grand jury subpoena for records from his accounting firm Mazars USA. The New York District Attorney is investigating hush-money payments made to two women who claimed they had affairs with Trump before he was president.

A separate case, arising from a House subpoena against Mazars is pending in a federal appeals court in Washington, DC. The Department of Justice is largely siding with Trump's personal lawyers in that lawsuit, and last month filed a "friend of the court" brief arguing that the House may not authorize a subpoena unless it can cite a specific legislative purpose.

Amann and other legal scholars say they doubt Trump's attempt to elude all subpoenas would succeed at the high court.

These are unpredictable, unsettled times in national politics, as well as within the federal judiciary. Chief Justice John Roberts has a record of high regard for executive branch prerogatives. He is among the majority of current justices who served in the executive branch early in their career. Yet the chief justice has also made plain his larger concern to keep the judiciary out of the volatile politicization that has seized the country and taken steps to separate himself from Trump.

As Trump has continually defied the Democratic-led US House of Representatives, he has simultaneously sought greater influence in the Third Branch, including through "us versus them" tweets differentiating between his judicial appointees and those of Democratic presidents.

In the case to be heard Wednesday in the southern district of New York, Trump is trying to staunch part of the judicial process. He is suing the New York County District Attorney's office to kill a grand jury subpoena for tax returns and other financial documents from Mazars.

Asking a federal judge to prevent the New York subpoena, Trump's lawyers wrote, "The U.S. Constitution ... prohibits the District Attorney from criminally investigating, prosecuting, or indicting the President while he is in office."

They point to the President's core powers under Article II of the Constitution and the Supremacy Clause.

They contend history is on their side: "The Framers of our Constitution understood that state and local prosecutors would be tempted to criminally investigate the President to advance their own careers and to advance their political agendas. And they likewise understood that having to defend against these actions would distract the President from his constitutional duties."

In a response filed Monday, Vance's team contended that "no such sweeping immunity" exists for a sitting president. It noted that the subpoena was directed at the Mazars and should not interfere with the President's executive responsibilities.

Prosecutors also referred to multiple state and federal investigations that have already centered on the President, including special counsel Robert Mueller's probe into election interference and obstruction of justice. Mueller, in fact, found that a sitting President could not be criminally charged, based on decades-old Department of Justice rules, but a President could be investigated.

Trump's team has deemed the Vance effort a political exercise more than anything, calling the subpoena "a bad faith effort to harass the President by obtaining and exposing his confidential financial information, not a legitimate attempt to enforce New York law."

The US House lawsuit was heard in July by a panel of the US Court of Appeals for the District of Columbia Circuit and a ruling is expected any day. Trump is appealing a decision by US District Court Judge Amit Mehta in May rejecting Trump's arguments.

"It is simply not fathomable," Mehta wrote, "that a Constitution that grants Congress the power to remove a President for reasons including criminal behavior would deny Congress the power to investigate him for unlawful conduct -- past or present -- even without formally opening an impeachment inquiry."

Unlike disputes over Trump administration policy that began immediately in January 2017 when the new President imposed a travel ban -- and have found the Supreme Court largely deferring to Trump -- cases testing his personal business dealings have not yet reached the nine justices.

The DC Circuit dispute over the House subpoena for Mazars USA and a separate New York-based Second Circuit case arising from the House's effort to obtain financial records from Deutsche Bank for Trump, his children and Trump-family controlled entities are the farthest along.

In a separate series of complaints, the 2nd Circuit earlier this month revived an ethics lawsuit against Trump that contends his hotel and other business interests violate the Constitution's Emoluments Clause, which prevents the President from accepting gifts from foreign governments without the permission of Congress. The 4th Circuit, conversely, has rejected an Emoluments-related lawsuit brought by the District of Columbia and Maryland against Trump in his personal capacity for possible conflicts of interest.

The DC Circuit will take up a third case on the issue, testing whether Democratic members of Congress can pursue their lawsuit against Trump for failing to allow Congress to review and vote on his business interests

Trump has refused to follow the usual presidential practice of divesting personal business interests once in office, and he has so far successfully prevented any collection of evidence in the lawsuits regarding the constitutionality of his business holdings.

In the tax-records case to be heard Wednesday by US District Court Judge Victor Marrero, Trump's lawyers acknowledge that no prior cases directly bolster the Trump position, and they minimize the reach of cases that subjected Presidents Nixon and Clinton to investigation.

In the 1974 Nixon case arising from a subpoena for Oval Office tapes related to the Watergate scandal, the Supreme Court unanimously rejected an assertion of executive privilege. The justices said the need for evidence in a pending criminal trial overrode the President's assertion that he had a constitutional right to keep communications private. After being forced to turn over the incriminating tape recordings, Nixon resigned.

More than two decades later, in 1997, the Supreme Court ruled that Clinton could not invoke presidential immunity to postpone a civil lawsuit by Paula Jones, who said Clinton had sexually harassed her when he was governor of Arkansas. The next year, in 1998, Starr obtained a subpoena to compel Clinton's testimony in a separate matter involving Monica Lewinsky, a former White House intern with whom Clinton had had an affair.

When Clinton agreed to the interview, Starr withdrew the subpoena.