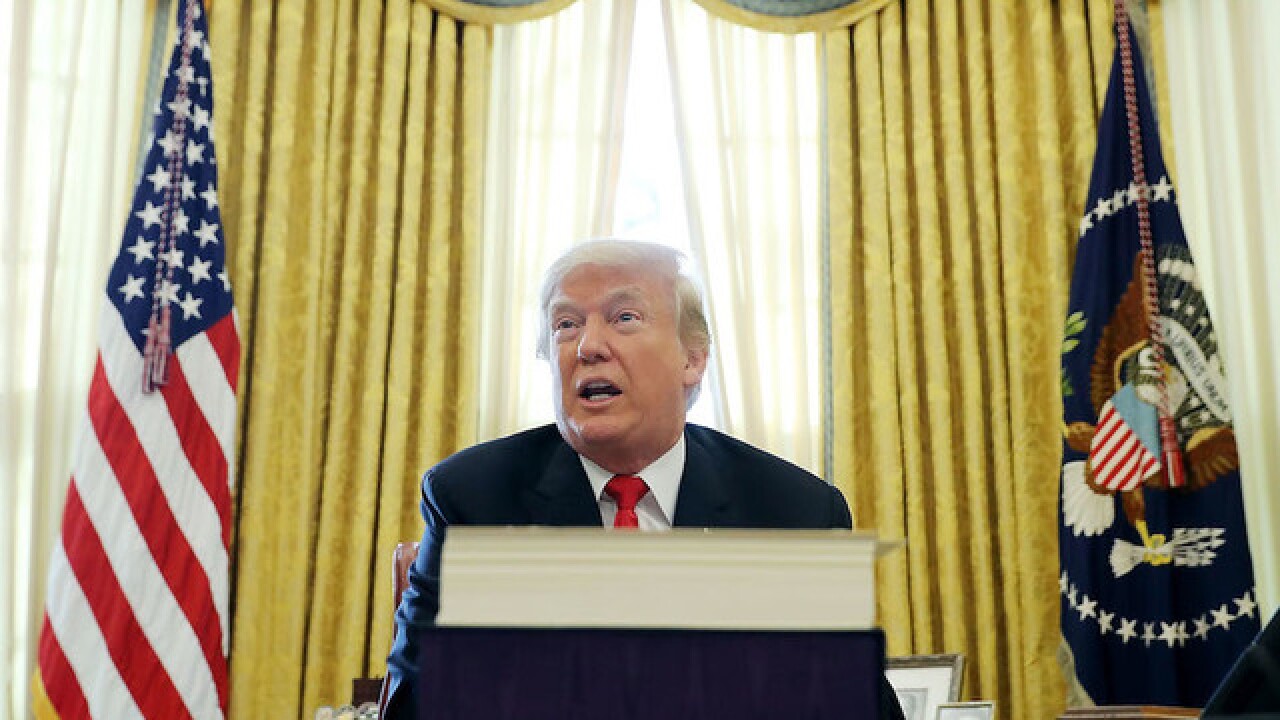 President Donald Trump's tweet Tuesday morning calling the Russia dossier "bogus" is already being used to argue that intelligence agencies should release a related government summary of the contentious document. Every time Trump on Twitter calls the dossier fake, he could be acknowledging that the intelligence community investigated it and presented to him their findings, according to a court filing Tuesday from lawyers who seek official government information about the dossier.

In this case and others, the President's prolific use of Twitter continues to complicate his administration's arguments. The court actions that mention Trump's tweets now stretch across a wide variety of issues, including the official handling of the dossier, immigration policy, who should run an independent agency and First Amendment rights. In many of the cases, a judge's ruling on the President's tweets could carve out a new area of law. In some cases, Trump's tweets may be official statements from the President, government lawyers have argued.

"Legally speaking, the tweets are quite significant. They provide a window into his beliefs and motivations," said Neal Katyal, the former acting solicitor general in the Obama administration who is leading a case that opposes Trump's travel ban.

But federal courts are still weighing how much the statements in Trump's tweets reveal about his presidential actions. Lawyers for the James Madison Project, a government transparency advocacy group, and Politico told a federal court Tuesday that Trump's tweets are public statements, and thus show that he knows the intelligence agencies vetted the document.

So far, lawyers for the government haven't responded to the latest argument. In previous court filings and in an appearance in November before the judge, the administration's lawyers said that the President's tweets signify nothing about what Trump knows of the intelligence work. The tweet could be evidence that Trump watched news reports about the dossier or that he'd know first-hand the truth of the accusations about him, Trump's legal team said.

"FBI CANNOT (after all of this time) VERIFY CLAIMS IN DOSSIER OF RUSSIA/TRUMP COLLUSION," the President wrote on Twitter Tuesday morning. The beginning of that tweet mentioned the show "Fox & Friends," leading many to conclude that his tweet was responding to a news segment on Fox News.

The James Madison Project and Politico have attempted since January to get the FBI, National Security Agency, the Office of the Director of National Intelligence and the CIA to release a two-page synopsis the intelligence community presented about a year ago to then-President-elect Trump about the dossier.

But the agencies won't even officially say if they investigated the dossier's claims or if the two-page synopsis exists. In court, the agencies can use a response that "neither confirms nor denies" their work.

CNN first reported on the two-page synopsis used to brief Trump in early January, and former FBI Director James Comey said in his Senate testimony in June that he briefed the President-elect on "salacious and unverified material."

In Tuesday's filing in the freedom of information case, lawyers for the James Madison Project and Politico argued the latest tweet about the dossier should be seen as an official confirmation from the President about the existence of the dossier and the FBI's role in vetting it.

"Operating upon the good faith assumption that this court has more important things to do than monitor the president's Twitter feed, the plaintiffs feel they have no choice but to keep this court updated on the continuous official statements by the president in which he specifically and substantively addresses" the issues in their lawsuit, the lawyers wrote.

They've argued the same thing before, after Trump tweeted about the dossier in October. Trump called the dossier "fake" and "discredited" four times that month. The lawyers seeking information also noted interviews Trump gave to Lou Dobbs of Fox Business Network and Sharyl Attkisson of the syndicated show "Full Measure," in which he commented on the dossier.

The Trump administration disagrees. Its lawyers wrote in an earlier filing that they're "treating the statements upon which plaintiffs rely as official statements of the president of the United States, but nothing in the statements states or even implies that [the agencies] made a final determination as to the veracity of any factual allegation allegedly contained in the two-page synopsis." Put another way, unless Trump publicly spells out that the intelligence community told him it was false, the rest of his government won't have to acknowledge it.

The lawsuit about the dossier isn't the only one where Trump's tweets inch into the dispute. Last week, in a court fight over who will run the Consumer Financial Protection Bureau, a lawyer who wants to prevent Trump appointee Mick Mulvaney from staying in charge mentioned how Trump tweeted about the agency's punishment of Wells Fargo Bank.

In that case, lawyers for Leandra English argue that Trump shouldn't be able to influence policy and enforcement at the agency. English is the CFPB's deputy director who believes she should be the bureau's acting head instead of Mulvaney, who also still serves as the White House's management and budget director.

And in yet another issue before the courts, immigrants who challenged Trump's travel ban alleged that his tweets show that he meant to discriminate against Muslims with the policy.

In all of the cases, a president's tweets could become a new part of legal precedent. Courts didn't consider a president's tweets previously "because it wasn't a matter of dispute," said Bradley Moss, an attorney in the dossier freedom of information case. "When Barack Obama was talking about drone strikes, he was talking about what he learned as president, not from watching Fox News," Moss added, citing another situation where the executive branch had to acknowledge the existence of a government program.