Details of Trump, Putin summit are set, will be announced Thursday 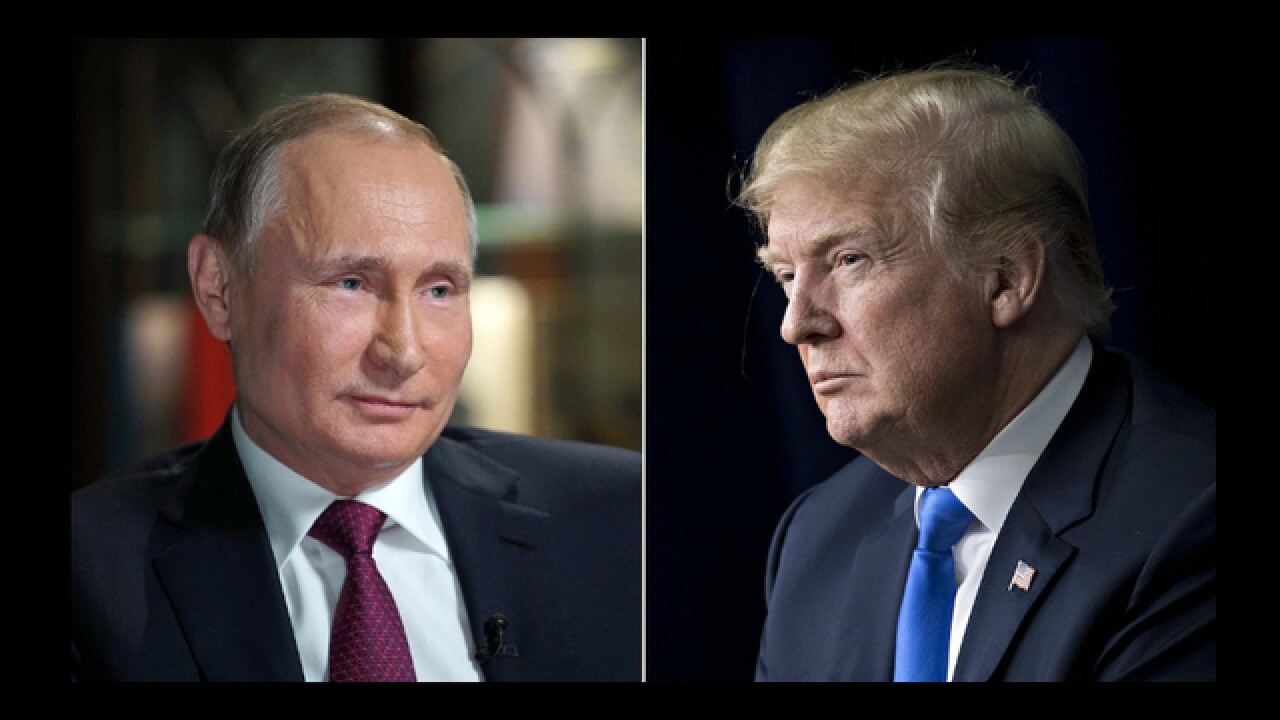 © 2018 Cable News Network, Inc.
Getty Images
<p>President Donald Trump is renewing his censure of NATO on the campaign trail ahead of his upcoming visit to the defense bloc's headquarters.</p>

Details of a summit meeting between President Donald Trump and Russian President Vladimir Putin will be announced on Thursday, a US official has told CNN. This official would not offer more details, but Helsinki, Finland, remains a leading site contender for the two leaders' meeting.

"The joint announcement is due to be made tomorrow," he told CNN's Matthew Chance.

Trump will be in Europe in mid-July for a NATO meeting in Brussels and a working visit to the United Kingdom.

On Tuesday, two sources familiar with the matter said it was possible Trump's meeting with Putin could take place on July 10 before his other European stops.

More details about the summit were expected as early as Wednesday when Trump's national security adviser John Bolton met with his Russian counterparts in Moscow. Before his arrival, it wasn't clear whether he would meet with Putin. But on Wednesday, Kremlin spokesperson Dmitry Peskov indicated the two men would sit for talks.

Peskov said the meeting could be "used as an opportunity to exchange opinions on major international problems -- this list is quite clear and obvious -- as well as the poor state of our bilateral relations."

Trump, meanwhile, is renewing his censure of NATO on the campaign trail ahead of his upcoming visit to the defense bloc's headquarters.

In Moscow, the US national security adviser is finalizing plans for a meeting between the American and Russian presidents.

And in London, protesters are devising ways to disrupt the President's long-delayed visit to the United Kingdom.

The parallel activities will collide in two weeks, when Trump departs for Europe on a trip intended to shore up alliances but more likely to reveal their strain. After this month's G7 meeting ended in recriminations between allies, there is little expectation among European and US diplomats of an easygoing time.

US officials have proceeded as if Trump will meet Putin in mid-July around his stops in Brussels for the NATO talks and the UK for a working visit.

Ahead of Bolton's trip, the White House said his intention in visiting Russia was to negotiate details of a meeting between the two presidents.

On Tuesday, a senior US official said Helsinki, the capital of Finland, had emerged as a strong possibility to host the summit. The Austrian capital Vienna had also been previously mentioned as a venue, though the official suggested that option had now been largely ruled out. Putin is operating on a strict schedule; his country hosts the World Cup final on July 15.

NATO members have pressed for the Putin meeting to occur after the NATO summit, one White House official said, citing concerns Trump might agree to something with Putin that they are then forced to go along with.

The prospect of a meeting with Putin, which Trump first raised during a congratulatory phone call in March, has sent ripples of consternation through European capitals. Some leaders fear a campaign to isolate Moscow for its destabilizing activities could be quickly undone by an eager-to-please Trump.

"It's the uncertainty," one western official said in explaining European concerns at a Trump-Putin meeting. "No one knows what he'll walk out saying."

Officials are watching with chagrin as a dynamic evident during Trump's visit this month to the G7 in Canada repeats itself.

Ahead of that summit, held at a riverside hotel in rural Quebec, Trump questioned whether he really needed to attend. On the evening before his departure, he engaged in a Twitter spat with his French and Canadian counterparts. He arrived late, missing a planned meeting with French President Emmanuel Macron, and departed early, leaving other leaders to discuss oceans and the environment without him.

At the same time, he appeared eager for his second stop in Singapore, the site of his highly anticipated sit-down with Kim Jong Un. He emerged from those talks to announce he was canceling joint US-South Korea military exercises, which he deemed provocative.

Upon his return, he snidely questioned the intentions of Canadian Prime Minister Justin Trudeau -- who he refers to simply as "Justin" -- while repeatedly marveling at his chemistry with the North Korean dictator, who he now addresses as "Chairman Kim."

In Europe, Trump will again come across US allies concerned about deep strains in their relationships before proceeding onward to a summit with an adversary -- one he's been intent on convening, even as some of his aides question the timing and wisdom of such an encounter.

Trump has displayed a more conciliatory attitude toward Russia in recent weeks, including urging G7 leaders in Canada to reinstate Putin in their group after he was expelled for Russia's 2014 incursion into Ukraine. In his March phone call, Trump discarded his aides' advice in congratulating Putin on his re-election, despite widespread accusations of voter fraud. He even raised the idea of hosting the event at the White House.

"It's bad for allies if the atmospherics with Putin are much better than at NATO. Bad message," said one person familiar with the discussions of the Trump-Putin meeting. "If Putin is all smiles, and NATO all snarls, it'll be a terrible signal."

Speaking to CNN's Elise Labott on Sunday, Secretary of State Mike Pompeo laid out a possible agenda for a meeting between the two men.

"Whether it's the battlefield in Syria, the situation in Ukraine, the Russians' active measures, I am sure there are many topics that President Trump and President Putin will discuss and each of them is important to trying to put the relationship back in place with a common set of understandings," Pompeo said.

Trump has sought better relations with Russia, even as US investigations probe Moscow's attempts to meddle in the 2016 presidential election. While he agreed to expel Russian diplomats from the US as punishment for Moscow's alleged poisoning of a former Russian spy, he initially resisted the move and later vented that he felt pressured to act.

Trump and Putin last greeted each other in person on the sidelines of a leaders' summit in Vietnam in November. That followed a formal sit-down meeting in Hamburg during last year's G20 summit.

At NATO headquarters in Brussels, talk is less about warming ties with Russia than it is about applying further pressure. Most European leaders have insisted a sanctions regime remain in place as long as Russia maintains its annexation of Crimea.

Leaders hope to agree on reinforcing NATO's posture on Europe's eastern flank to deter Russian aggression, a campaign supported and increased by US Defense Secretary James Mattis. Some European officials fear Trump's overture to Putin could result in the pressure fading.

"A meeting between President Trump and President Putin will be in line with NATO policies because NATO believes in dialogue with Russia," he said at a meeting of European defense ministers. "We need to talk to Russia, partly to try to improve our relationship with Russia, but even if that's not possible to improve the relationship in the near future, it is important to manage a difficult relationship to Russia. Meaning that we have higher tensions, we have more military presence, more military exercises close to our borders."

Inside NATO's sprawling new glass building, which Trump has insulted, the President will find himself again face-to-face with the allies he spurned in Canada, including Trudeau, Macron and German Chancellor Angela Merkel. He attended a similar summit a year ago, shocking observers when he failed to mention an endorsement of NATO's Article 5, the common defense provision that maintains an attack on one partner is an attack on all.

Afterward, Trump and his aides insisted he supported the provision. But his visit was colored by a near-hostile attitude, including pushing aside the prime minister of Montenegro. When it was his turn to make remarks, Trump lectured leaders on their countries' defense budgets.

"Look at NATO," Trump said during a campaign rally in South Carolina on Monday. "It's all wonderful and we like to help out. But it helps them -- they're in Europe! It helps them a lot more than it helps us. We're very far away!"

Trump's indignation at European defense spending is wrapped up in his larger view of the continent as a drain on the United States, which includes his harsh stance on trade. He's promised to slap new tariffs on European autos, escalating a tit-for-tat trade battle that's already led some US companies such as Harley-Davidson to announce they're moving production overseas.

And he's bemoaned Europe's handling of migrants, using the tenuous situation there as rationale for his own hardline tactics.

During his meetings in Europe this week, Bolton has sought out those types of viewpoints, including during meetings in Rome. The National Security Council tweeted a photo of Bolton smiling during a meeting with Italian Deputy Prime Minister Matteo Salvini, who has taken heat recently for his comments on migrants.

In recently unearthed footage, Salvini is seen calling for a "mass cleansing, street by street, piazza by piazza, neighborhood by neighborhood" of migrants, decrying the situation as "out of control."

An admirer of Putin and an avid Twitter user, Salvini is the type of European leader that Trump and his allies have worked to cultivate since taking office, often to the dismay of more establishment politicians. In the UK, where Trump will travel following his stop in Brussels, the President has been a supporter of pro-Brexit politician Nigel Farage, even suggesting he would make a strong British ambassador in Washington.

Sentiments like that -- along with his criticism of London's mayor, his tweets about a bombing in London and his retweets of an extreme right-wing British group -- have garnered Trump widespread unpopularity in Britain. British Prime Minister Theresa May, ever wishful of improving her ties with Trump, hopes his visit in July won't be overshadowed by an immigration crisis in the US or fresh controversy from NATO.

She also hopes mass protests planned for London won't impede her welcoming abilities. Already, planners have said tens of thousands of people are expected to march in the capital. Protests are also expected at Trump's golf course in Scotland, where he's expected to spend at least a night.

Much of the President's visit to the UK will occur outside of London, people familiar with the planning say, including a meeting with Queen Elizabeth II at Windsor Castle and bilateral talks with May at the prime minister's country estate Chequers.

He's not, for now, planning to address Parliament -- perhaps a disappointment for demonstrators planning to float a 20-foot helium balloon in the shape of a Trump-faced orange baby nearby.