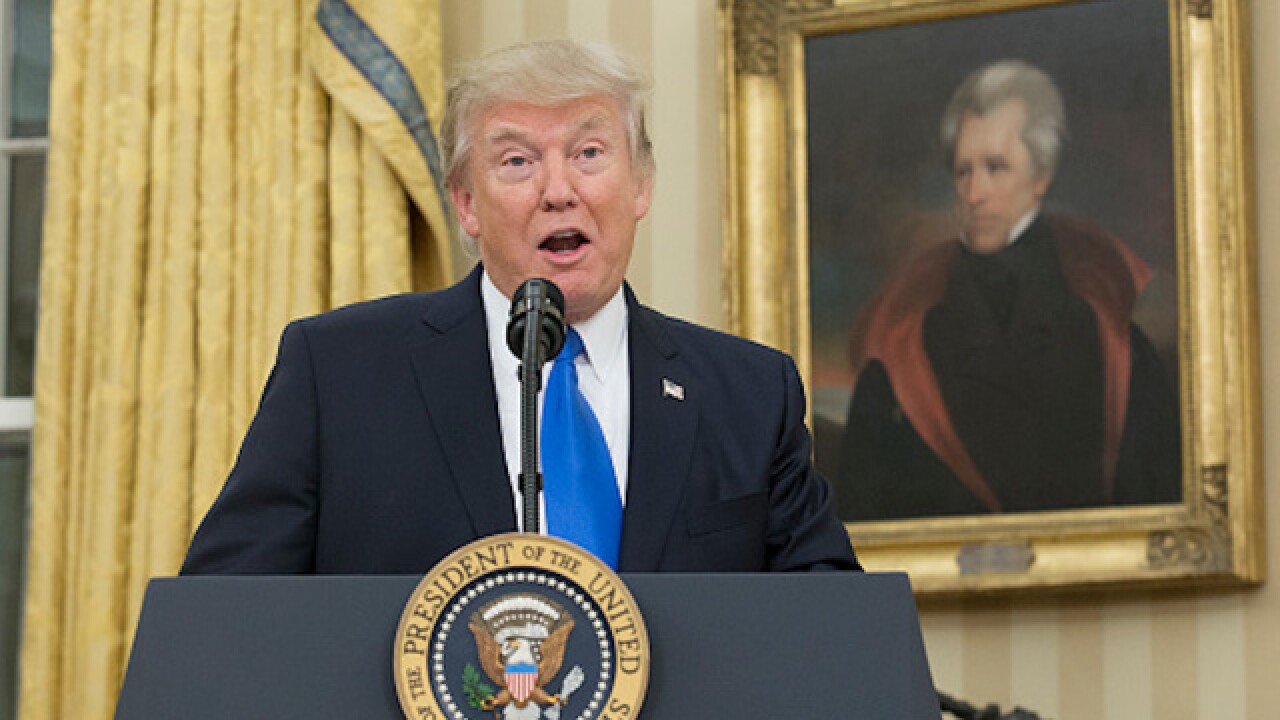 Copyright 2017 Scripps Media, Inc. All rights reserved. This material may not be published, broadcast, rewritten, or redistributed.
Pool
<p>WASHINGTON, DC - FEBRUARY 1: (AFP OUT) U.S. President Donald Trump, beneath a portrait of populist President Andrew Jackson, speaks before the swearing-in of Rex Tillerson as 69th secretary of state in the Oval Office of the White House on February 1, 2017 in Washington, DC. Tillerson was confirmed by the Senate earlier in the day in a 56-43 vote. (Photo by Michael Reynolds-Pool/Getty Images)</p>

The decision would be a significant foreign policy break with nearly every other nation on earth and a major reversal of the Obama administration's efforts on climate change.

The precise mechanism for withdrawal hasn't yet been determined, but Trump has made clear he plans to fulfill his campaign promises to withdraw.

A formal announcement is expected at some point this week. The officials cautioned the plans could change until Trump makes his decision public.

The administration's decision comes after months of internal debate and speculation about what Trump, who campaigned on leaving the deal, would do once he took office.

The White House was initially slated to make a final decision on the climate accord earlier this month, but delayed the decision until the G7 meeting in Sicily. At the summit, German Chancellor Angela Merkel told reporters the climate debate was "controversial" and that the leaders of the other G7 nations -- France, Japan, Canada, the United Kingdom and Italy -- all urged Trump to remain a part of the 2015 agreement.

Aides to Trump said he was listening with an open mind to the other leaders' arguments about Paris, but had yet to decide whether to withdraw the US from the pact.

The meetings inside the West Wing had been contentious, sources told CNN, as aides expressed their deep grievances over the climate agreement that President Barack Obama helped broker with every country except Syria and Nicaragua.

Steve Bannon, Trump's chief strategist and the former head of Breitbart, had pressed Trump to stick with his campaign promise and leave the deal.

But Ivanka Trump, the President's top aide and daughter, pressed aides to look at the full picture when considering what withdrawal could mean. Trump's son-in-law and top aide, Jared Kushner, was said to be neutral on the deal.

Tillerson and Secretary of Energy Rick Perry had both advised against leaving the deal, sources said.

Trump has also been bombarded with voices urging him to stay in the deal from outside the White House. Elon Musk, the tech billionaire and founder of Tesla, tweeted earlier this month that he spoke with Trump about sticking with the deal. And former Vice President Al Gore, according to a person familiar with a call between he and the President, spoke with Trump earlier this month.

Gore, who met with Trump during his presidential transition, has been an outspoken critic of leaving the Paris accord.

Obama and a host of other countries signed the climate change agreement in 2015 and the former president touted it as the "best chance we have" to save the planet.

"The Paris agreement establishes the enduring framework the world needs to solve the climate crisis," Obama said, speaking from the White House. "It creates the mechanism, the architecture, for us to continually tackle this problem in an effective way."

But Republicans have slammed the climate deal and Trump joined the chorus when he ran for president.

Trump said he would "cancel" the deal on the campaign trial and his campaign's energy plan included a pledge to "cancel the Paris climate agreement and stop all payments of US tax dollars to UN global warming programs."