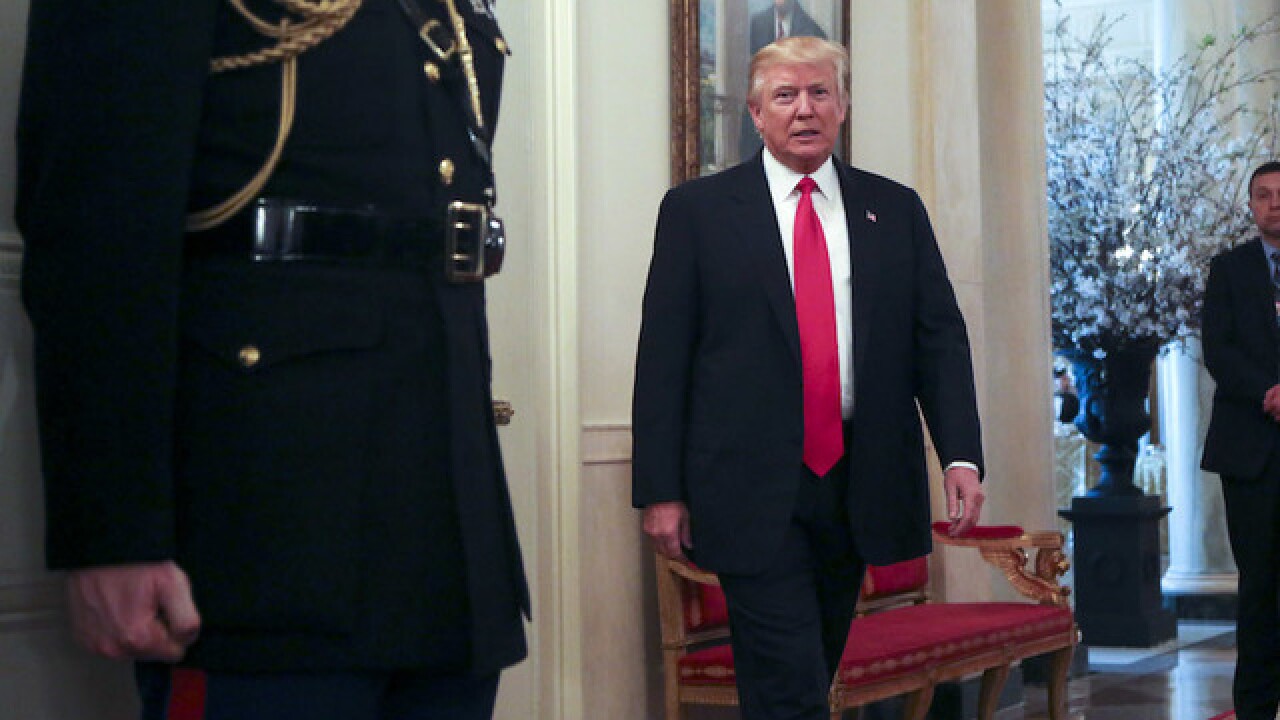 RELATED:  Who is Wilbur Ross?

The president invited 18 reporters from regional TV affiliates around the country for wide-ranging conversation ahead of his first address to a joint session of Congress Tuesday. Topics ranged from Russia, to repealing and replacing the Affordable Care Act, to the budget, promising that his administration is “not touching Social Security.”

Most of the dinner was off the record, but when the president learned that his choice for Commerce Secretary, Wilbur Ross, had been confirmed by the Senate, he told the group Ross “is a great talent. He knows all the industries. Wilbur doesn’t need any advice from anybody. He’ll take the advice, but he doesn’t need it.”

In addition to the president, chief of staff Reince Priebus, press secretary Sean Spicer and Counselor to the President Kellyanne Conway joined the dinner.

First Lady Melania Trump and Vice President Mike Pence greeted the reporters in the State Dining Room before the meal.

Congressional Republicans are divided over how aggressively to pursue these allegations, with some lawmakers calling for a full-scale look at the former national security adviser Mike Flynn’s communication with Russia while others say there is no evidence of such contacts.

House Intelligence Committee Chairman Devin Nunes, R-Calif., said today the focus of the House’s probe would be on information leaks not on alleged inappropriate contacts. “As of right now, I don’t have any evidence of any phone calls. It doesn’t mean they don’t exist … What I’ve been told by many folks is that there’s nothing there,” Nunes said.

When asked about his promise to repeal and replace the Affordable Care Act, President Trump said implementation “will take a while, like everything in the world, it will take a little time.”

According to White House officials, the dinner was a first of its kind and part of the administration’s efforts to reach the communities that voted for Trump. Regional reporters also have been brought into the daily White House briefing via Skype.

Still, the rift between Trump’s administration and the media continues to widen. Trump mocked and disparaged the news media on Friday in a speech at the Conservative Political Action Conference, repeating his attack that much of the media represents "the enemy of the people.” He said that reporters "shouldn't be allowed" to use unnamed sources.

Hours after that speech, press secretary Spicer barred several outlets, including those who have reported stories Trump didn’t like, from a press gaggle. Over the weekend, the president announced in a tweet that he wouldn’t be attending the White House Correspondent’s Association Dinner in April.

The president will host a lunch Tuesday with major network and cable anchors. Presidents traditionally have met with network news anchors prior to delivering their State of the Union address. Trump's speech on Tuesday technically won't be a State of the Union, but it will be his first speech to a joint session of Congress.

Over dinner with the regional reporters, the president hinted there will be some controversial statements in Tuesday’s address.