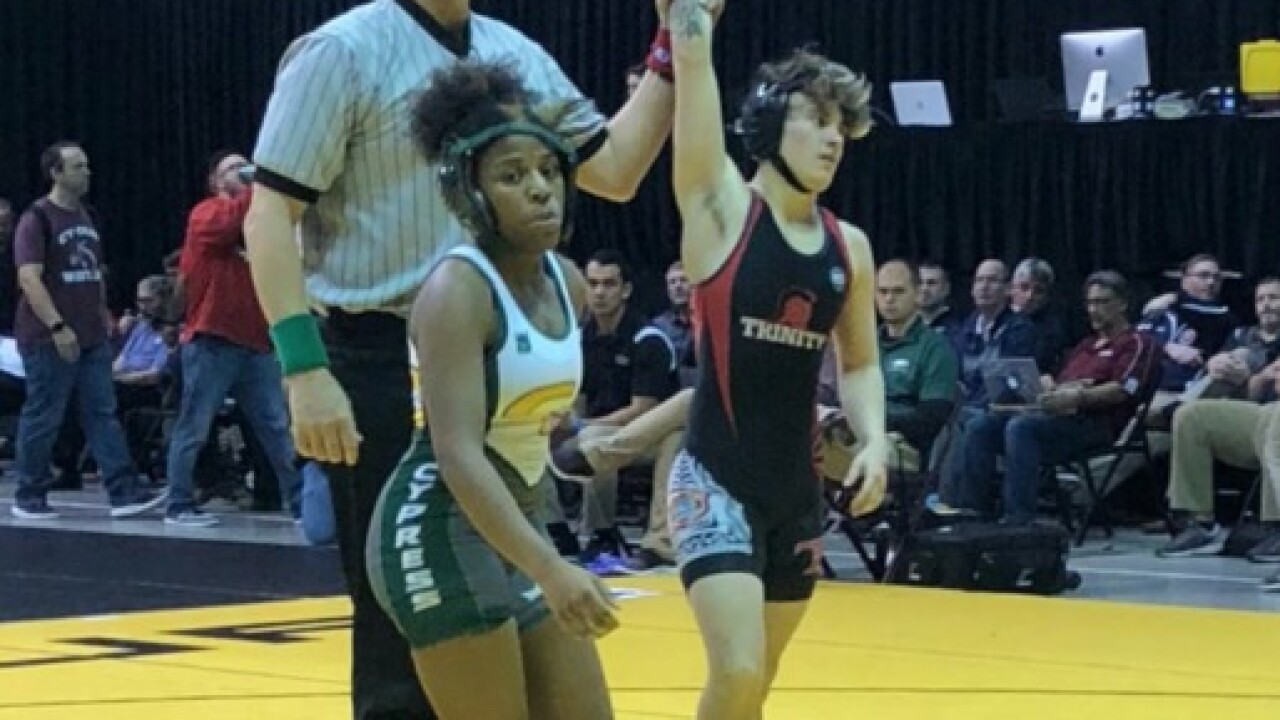 Copyright 2018 Scripps Media, Inc. All rights reserved. This material may not be published, broadcast, rewritten, or redistributed.
<p>Mack, pictured on the right. Photo by Trinity Athletics Department.</p>

Mack Beggs defended his Texas wrestling state title on Saturday by winning the girls Class 6A 110-pound class, to the chagrin of some of those in attendance in Cypress, Texas, the Dallas Morning News reported.

Beggs, who was born female, is a transgender male who is only allowed to wrestle against girls. Texas' University Interscholastic League requires that athletes compete in the gender listed on their birth certificate.

Beggs told the Dallas Morning News that he has not gone through any gender reassignment surgeries. But that did not stop those in the crowd from heckling Beggs.

"They're saying 'steroids.' They're saying, 'Oh, they're beating up on girls,'" he told the Morning News. "It just comes down to technique and who has the most heart. I put too much blood, sweat and tears, I put too much B.S. into this journey that I wanted to come out on top."

If Beggs had his choice, he would be competing against boys.

"What can I tell people? I can tell the state legislature to change the policy, but I can't tell them to change it right now," Beggs told reporters. "All I can hope for is that they come to their [senses] and realize this is stupid and we should change the policies to conform to other people in my position."

Among those who believe it was not a fair bout was Beggs' semifinal opponent Kayla Fitts, who went 52-0 as a senior for Cypress Ranch High School.

"The strength definitely was the difference. I didn't anticipate how strong he was," Fitts told the Morning News.

"I understand if you want to transition your gender," she added. "I understand that totally. But there's a time and a place."

Part of the issue has been that Beggs is taking a low dose of testosterone. Although testosterone injections are prohibited for athletes, an exception is made for Beggs due to the state's "safe harbor" provision, which allows for injections when used for valid medical purposes.

Beggs said that he plans on wrestling against males in college.