Tillerson on North Korea: Military action is 'an option' 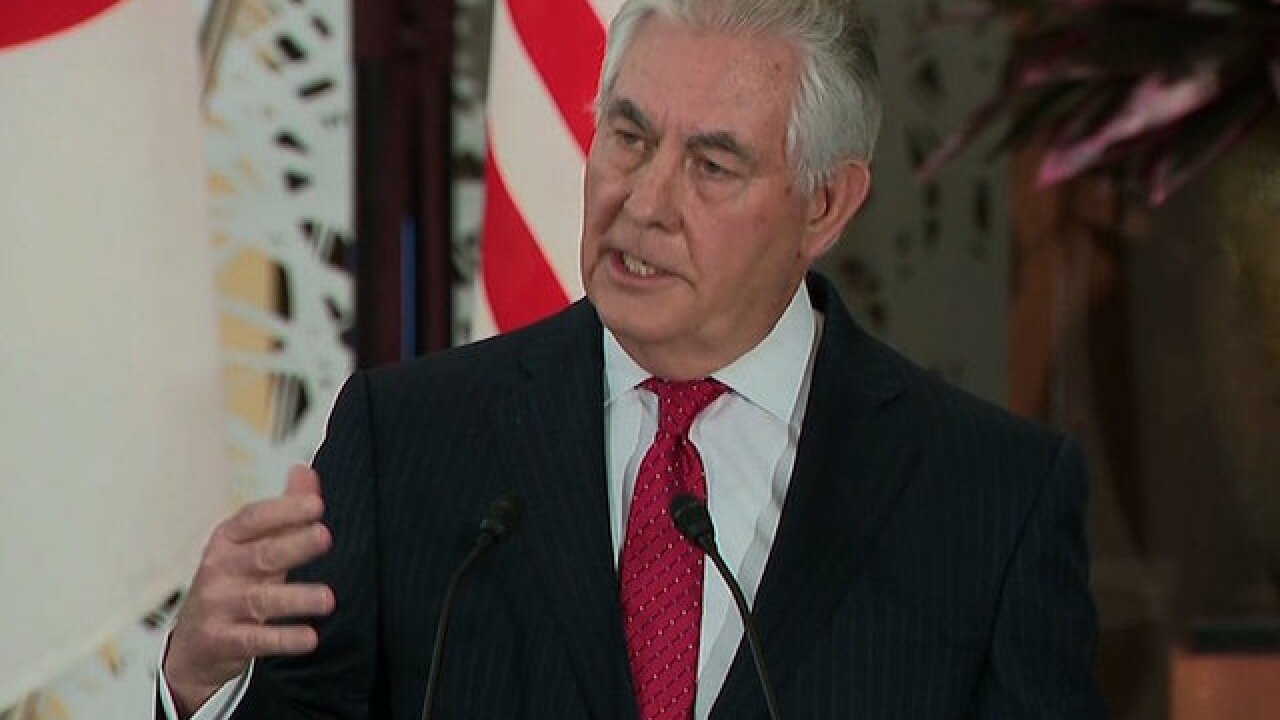 © 2017 Cable News Network, Inc.
POOL
<p>Secretary of State Rex Tillerson begins his first official trip to Asia aiming to propose a new approach to the North Korean nuclear threat and to cope with Chinese anger about US attempts to protect allies from Pyongyang.</p>

SEOUL (CNN) -- The US would consider military action against North Korea if it was provoked, Secretary of State Rex Tillerson said Friday.

"Certainly, we do not want things to get to a military conflict ... but obviously, if North Korea takes actions that threatens the South Korean forces or our own forces, then that would be met with an appropriate response," he said, in response to a question from CNN.

"If they elevate the threat of their weapons program to a level that we believe that requires action, that option is on the table," Tillerson added.

The Trump administration signaled a tough stance regarding North Korea at a White House dinner with a small group of journalists, including Scripps reporters , in late February. President Trump told the journalists that “North Korea is a world menace, it is a world problem,” adding that the country has to be dealt with and “has to be dealt with soon.”

Tillerson's remarks come at a time when the US intelligence community and the Defense Department are increasingly anticipating that North Korea will soon undertake a new round of testing of its missile and nuclear program, half a dozen US officials have told CNN.

The secretary of state is on a three-country tour to the region amid heightened tensions on the Korean peninsula following recent North Korea missile launches, and fears it's preparing for another nuclear test.

In Tokyo Thursday, Tillerson said efforts over the past 20 years to halt North Korea's nuclear development had failed.

He said it was time for a new policy on North Korea, but released no details. It is clear that he sees Beijing, where he will fly to Saturday, as a key part of Washington's new approach.

A senior Chinese official told CNN this week that Beijing plans to present its own plan to Tillerson during his visit.

However, Tillerson dismissed suggestions by Beijing that the US should drop joint military exercises with South Korea as a show of good faith to Pyongyang. Washington did "not believe that conditions are right to engage in any talks at this time."

"Conditions must change before there are any scope for talks to resume, whether they are five party or six party," he said.

Tillerson called on China to give up its opposition to the Terminal High Altitude Area Defense (THAAD) system or act to "address the threat that makes THAAD necessary." The missile defense system is in the process of being deployed in the country's south.

He also urged Beijing to drop any retaliatory action against South Korea, amid allegations businesses and the tourism industry is being punished for Seoul's stance on the issue.

Earlier in the day, Tillerson visited the demilitarized zone, the highly-fortified border between North and South Korea, becoming the most senior US official to visit the area since President Barack Obama in 2012.

There he met some of the more than 28,000 US troops stationed on the peninsula, and toured the Joint Security Area, where North and South Korea soldiers stand facing each other. A Military Armistice Commission briefing room straddles the border.

The relatively inexperienced Tillerson has waded into a political minefield in South Korea, where President Park Geun-hye was impeached a week ago and preparations are being made for a snap election on May 9.

That election has raised questions over the future of the THAAD system, with some candidates calling for its deployment to be reviewed by the National Assembly.

"We look forward to a productive relationship with whoever the South Korean people elect to be their next President," Tillerson said.

"My expectation that the new government in South Korea will continue to be supportive of the THAAD system."

Tillerson repeated Friday the US had spent too much money on a failed North Korea policy.

"America has provided $1.3 billion in assistance (to North Korea) since 1995. In return, North Korea has detonated nuclear weapons and launched ballistic missiles."

After Trump suggested during his campaign that he would be willing to talk to North Korean leader Kim Jong Un, many speculated that talks would be forthcoming.

However, Tillerson said that option was not being considered right now.

He called on China to "fully implement" UN-approved sanctions against North Korea, and said Washington will be "calling on everyone to join in" future actions.