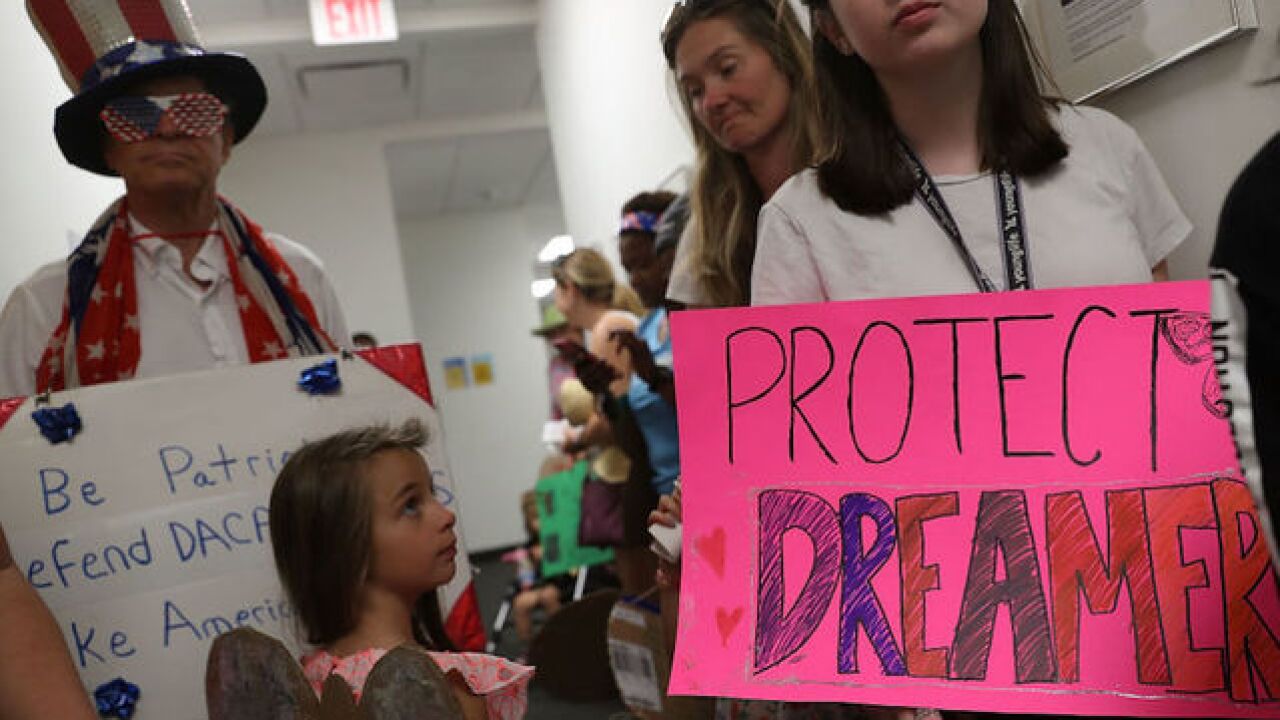 Image copyright 2018 Getty Images. All rights reserved. This material may not be published, broadcast, rewritten, or redistributed.
Joe Raedle
<p>Lily Logsdon (R) joins with other activists in front of the office of Sen. Bill Nelson (D-FL) to ask him to help recipients of the Deferred Action for Childhood Arrivals (DACA) as well as all immigrants living in America on February 2, 2018 in West Palm Beach, Florida. The events organizers expressed their concerns about the current political landscape and how they feel it is contributing to the persecution and discrimination of documented and undocumented immigrants. </p>

A federal judge in Texas is set to hear arguments on whether he should end the Deferred Action for Childhood Arrivals program, a case that could tee up a fast track for the issue to hit the Supreme Court this fall.

District Judge Andrew Hanen, a George W. Bush appointee, will hear arguments from seven states that sued over DACA, a program that protects from deportation young undocumented immigrants who came to the US as children. The states, led by Texas, argue the DACA program is unconstitutional -- relying heavily on a previous court ruling from Hanen that blocked an expansion of the program and the creation of a similar program for immigrant parents from going into effect.

At issue Wednesday will be whether Hanen should immediately order a halt to the program, setting the stage for him to make a final ruling on its constitutionality.

The Trump administration decided to end DACA last September, in part due to a threat from Texas and other states to sue if it didn't. But in the months since, three federal judges around the country have ruled that decision was not adequately justified, and have ordered the program to remain.

Texas sued, in the end, to argue that the original program was unconstitutional so it could be wiped off the books.

Wednesday's hearing comes as the Trump administration is already preparing to appeal a different order, from a DC district judge, which would require it to reopen the program to new applications and restore it in full. Previous courts have merely ordered the government to continue renewing permits. That judge has postponed the implementation of his decision 20 days to allow for the appeal. The other cases are pending before appellate courts in California and New York.

Hanen is widely seen as unfriendly to DACA, given his previous ruling on its sister program.

Former Solicitor General Don Verrilli, who defended DACA's expansion in the previous Hanen case under the Obama administration, told reporters on a call Monday that the administration is trying to use the courts to achieve a policy outcome that it is too scared to stand behind itself. The administration justified ending the program because a court would likely find it unconstitutional, rather than because the administration saw a harm in it continuing.

"I think what you see here is the government hiding behind a legal rationale because it's unwilling to embrace the reality that it is abandoning DACA for reasons of policy, not reasons of law," Verilli said, calling it a "misuse of the judicial process to achieve policy objectives."

"It's, as I said, quite striking that this administration is using these kinds of legal maneuvers to try to achieve an outcome that it's unwilling to actually embrace and defend on the merits," he added.

In a statement Monday, Attorney General Jeff Sessions decried the creation of DACA in the first place, citing the original Hanen ruling as evidence of its lack of validity.

"The last administration violated its duty to enforce our immigration laws by directing and implementing a categorical, multipronged non-enforcement immigration policy for a massive group of illegal aliens," Sessions said. "This wrongful action left DACA open to the same legal challenges that effectively invalidated another program they established -- Deferred Action for Parents of Americans and Lawful Permanent Residents (DAPA). ... The Trump administration and this Department of Justice will continue to aggressively defend the executive branch's lawful authority and duty to ensure a lawful system of immigration for our country."