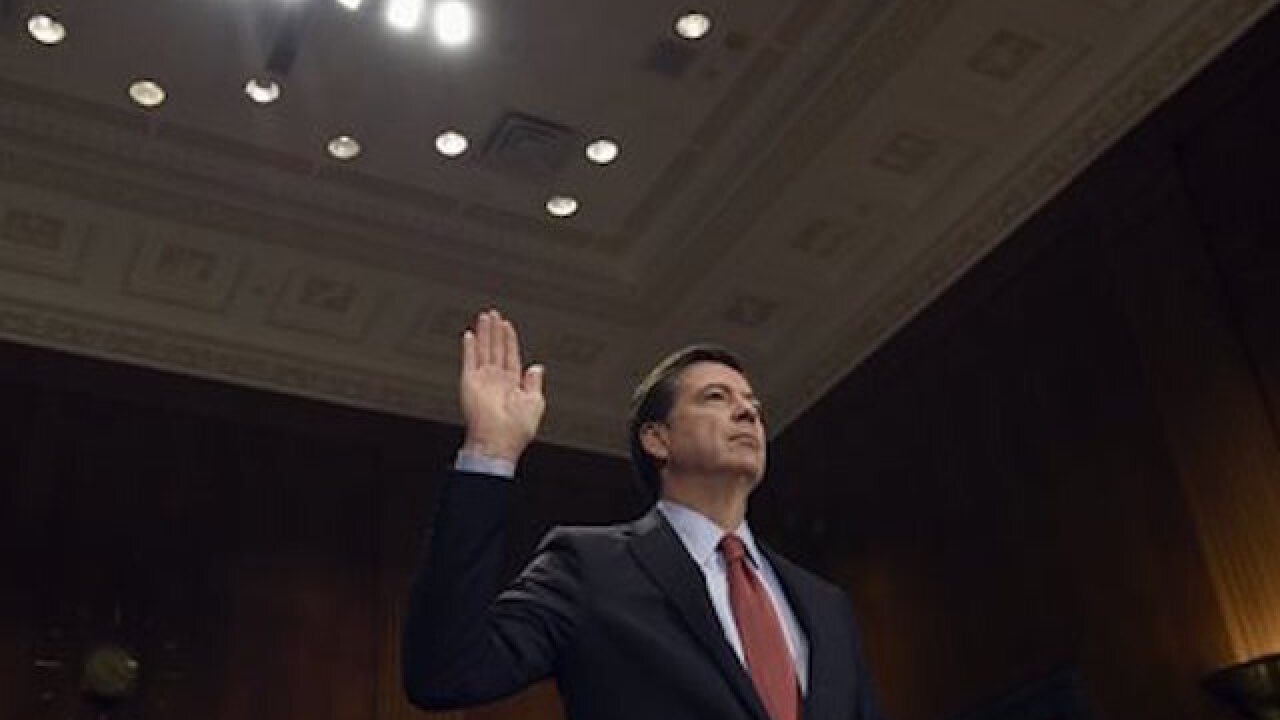 Susan Walsh
<p>FBI Director James Comey is sworn in on Capitol Hill in Washington, Wednesday, Dec. 9, 2015, prior to testifying before the Senate Judiciary Committee. Comey said the two San Bernardino shooters were radicalized at least two years ago and had discussed jihad and martyrdom as early as 2013. (AP Photo/Susan Walsh)</p>

WASHINGTON (AP) — The U.S. government appears not to have picked up on extremist messages exchanged during the online courtship two years ago between the American-born man accused in the California shootings and his then-fiancée in Pakistan, federal officials told Congress during closed-door briefings on Capitol Hill on Thursday.

American officials say Syed Rizwan Farook and his wife, Tashfeen Malik, discussed martyrdom and jihad online as early as 2013. But the couple never surfaced on law enforcement's radar and Malik was able to enter the U.S. on a fiancée visa last year despite having professed radical views online.

Meanwhile, the investigation into the shootings that left 14 dead last week continued in San Bernardino, where an FBI dive team searched a small, urban lake about 3 miles north of the shooting site.

FBI Director James Comey and other senior American officials briefed members of Congress, who are concerned red flags may have been missed in the last two years.

"Everyone's asking the same questions about how it is that law enforcement didn't know, or intelligence officials didn't know — that they could have flown under the radar and nothing gave an indication that they were a threat," said Rep. Jim Langevin, a Rhode island Democrat and member of the House Homeland Security Committee.

Rep. Adam Schiff, the top Democrat on the House Intelligence Committee, said Malik was subjected to an in-person interview during the application process for a visa.

Republican Rep. Will Hurd of Texas, a member of the House Homeland Security Committee, said there's currently no evidence Malik's radicalization would have been readily apparent when she was evaluated for a fiancée visa.

"I don't think there was missed information," he said. "It appears that there was not any evidence that would have been discoverable during an interview for a visa."

He declined to discuss what specifically led investigators to conclude that the couple had radicalized independently as early as 2013.

"It's safe to say that the information about what happened prior to their marriage and to the attacks in San Bernardino was acquired through forensic investigations of these individual lives," Hurd said.

"These people weren't on the radar," he added.

New revelations show a much deeper connection between Farook and Enrique Marquez, his friend who bought the assault rifles used in the shooting, than previously was disclosed. Marquez has not been charged with a crime.

At least three years ago, Marquez purchased the high-powered weapons that Farook and his wife used to open fire on a holiday gathering of Farook's fellow health inspectors Dec. 2, killing 14 people. Farook and Malik were killed hours later in a shootout with police, leaving behind a 6-month-old daughter.

Investigators are trying to determine if Farook's path toward extremism predated 2013 and whether it led to plans to launch an attack in 2012, according to two people familiar with the investigation who were not authorized to discuss the matter publicly and spoke on condition of anonymity.

Marquez and Farook "were plotting an actual attack" that year, including buying weapons, but became apprehensive and shelved the plan because of law enforcement activity and arrests in the area, said Idaho Sen. Jim Risch, a Republican who sits on the Senate Select Committee on Intelligence.

Marquez, 24, spoke with federal authorities after they raided his mother's Riverside house over the weekend. He and Farook were friends for years and became family last year, with a sister-in-law in common.

The two men were listed as witnesses on the marriage license when Farook's brother, Raheel, wed a Russian woman in 2011.

Three years later, Raheel Farook and his wife, Tatiana, were witnesses to Marquez's marriage to her sister, Mariya Chernykh, according to Riverside County records.

The ceremony took place at the Islamic Society of Corona-Norco, according to the marriage license, though the mosque's facility manager denied it occurred there.

Comey, who testified in the Senate on Wednesday, described Farook and Malik as examples of homegrown violent extremists who appear to have radicalized "in place," drawing a distinction between the California attack and the one last month in Paris that officials suspect involved planning and training in Syria.

He said the FBI did not yet know if Farook and Malik's marriage was arranged by a foreign extremist organization.

Malik's father, reached in Jiddah, Saudi Arabia, condemned his daughter's actions and said he is "very, very sad. ... I am in such pain that I cannot even describe it."

The father, Gulzar Ahmed Malik, has been a resident in the kingdom since the early 1980s, the Saudi Interior Ministry said. His daughter was from Pakistan but traveled to Saudi Arabia.