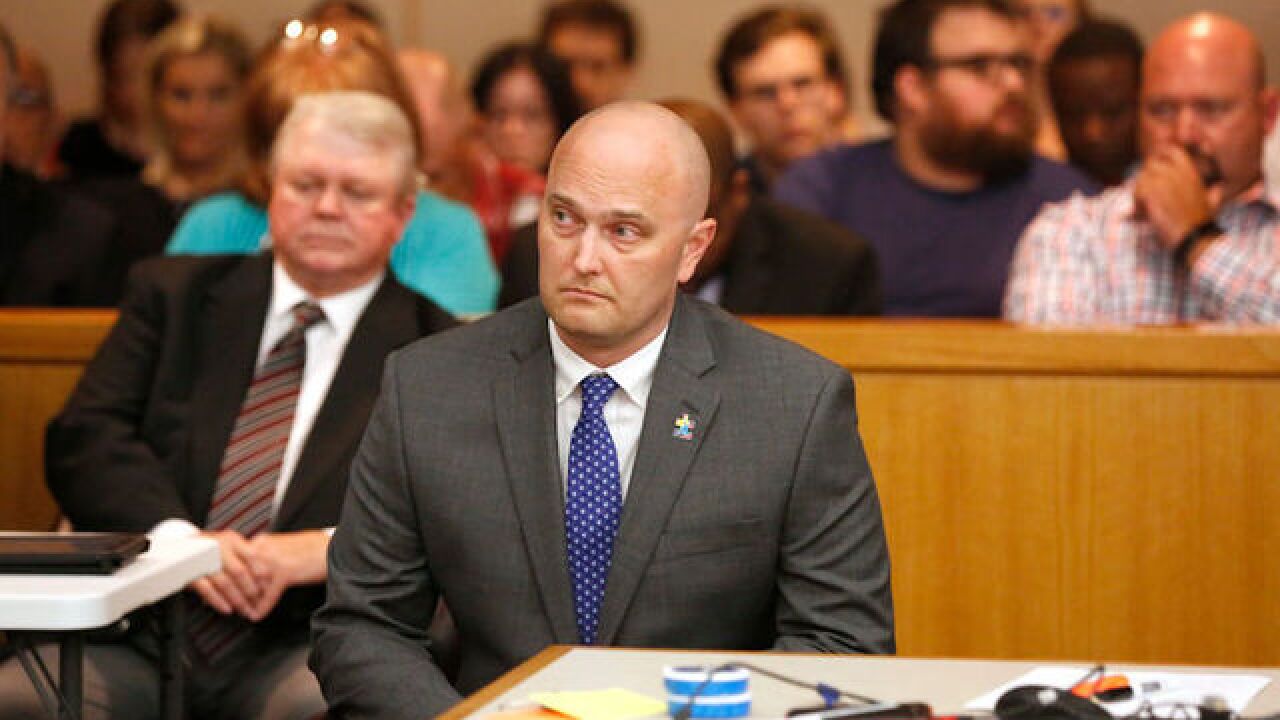 Image copyright 2018 Getty Images. All rights reserved. This material may not be published, broadcast, rewritten, or redistributed.
Rose Baca
<p>Fired Balch Springs police officer Roy Oliver sits before the reading of the verdict on the ninth day of the trial of Oliver, who was charged with the murder of 15-year-old Jordan Edwards, at the Frank Crowley Courts Building in Dallas on Tuesday, Aug. 28, 2018. </p>

When a judge read the guilty verdict in the police shooting of unarmed black teen Jordan Edwards in Texas, the victim's family gasped and sobbed.

"Thank you Jesus," someone muttered as relatives embraced in the packed courtroom Tuesday.

After hours of deliberations, a jury had found Roy Oliver guilty of murder in last year's shooting death of the 15-year-old in a Dallas suburb. The sentencing phase started after the verdict, and will resume Wednesday morning.

'This case is not just about Jordan'

The rare guilty verdict in the trial of a police officer stunned relatives. Most police-involved shooting deaths, such as Philando Castile in Minnesota and Alton Sterling in Louisiana, have ended in acquittals or no charges despite national protests condemning police brutality.

"We don't want another parent to have to go through what this family has had to deal with," Jordan's family attorney, Daryl Washington, said. "This case is not just about Jordan. It's about Tamir Rice, it's about Walter Scott, it's about Alton Sterling, it's about every African-American... who have been killed and who have not gotten justice."

Oliver, who is white, fired at a vehicle Jordan was in, striking the teen. A Dallas County jury convicted him of murder but found him not guilty of two lesser charges of aggravated assault and manslaughter, CNN affiliate KTVT reported.

Jordan's family said he was at a private party with his two brothers and two friends on the night of April 29 last year when someone announced that police had been dispatched. The group headed to the car.

Around 11 p.m., Oliver and another officer responded to the home after reports of underage drinking. While in the residence searching for the homeowner, they heard what they believed were gunshots nearby, police said.

One officer went to the area where he heard the gunshots, and Oliver went to his squad car and retrieved his patrol rifle, according to an arrest warrant issued by the Dallas County Sheriff's Office.

The officer who was with Oliver saw a Chevrolet Impala reversing and repeatedly ordered it to stop. He then approached the vehicle from the passenger side with his weapon drawn, police said.

The vehicle stopped, then slowly moved forward as the officer punched the passenger door window, breaking it, the arrest warrant said.

Oliver discharged multiple rounds from his patrol rifle as the vehicle drove past him, the arrest warrant said. One bullet struck Jordan, who was a passenger in the car.

In a lawsuit, Jordan's father said neither the teen nor his group posed a threat to the officers' safety.

After the shooting, Balch Springs Police Chief Jonathan Haber initially said the car Jordan was riding in was moving aggressively toward police -- leading Oliver to fire his rifle.

But days later, Haber said he misspoke, adding that body camera footage showed the car was driving forward, away from the officers -- not reversing toward them.

Calls for police body cameras have grown as incidents of police brutality make headlines nationwide, with dozens of major police departments nationwide using them to provide transparency and accountability.

But studies on the effects of body cameras have uncovered mixed results, with recent controversies in Baltimore showing what appears to be officers allegedly planting evidence, highlighting that even such footage can be a source of controversy.

Convictions such as Oliver's are still a rarity mostly because when an officer says the person flashed a gun or made a sudden move, jurors tend to side with them, said Kristen Clarke, president and executive director of the Lawyers' Committee for Civil Rights Under Law.

"At the end of day, officers in their badge and uniform enjoy the benefit of the doubt," Clarke said last year.

"Unless we start holding officers accountable for using deadly force in a reckless manner, I think it will be very difficult to see changes in the use of lethal force at the outset."

'This innocent kid was not doing anything wrong'

Prosecutors told jurors that Jordan did not deserve to die.

"This innocent kid was not doing anything wrong, nothing," prosecutor Mike Snipes said, according to KTVT.

Jordan's fatal shooting was one of several recent deaths of African-American men at the hands of police, which have sparked national protests and a debate on police conduct.

Few police officers face trial in shooting deaths, and even fewer are convicted.

In December, former South Carolina officer Michael Slager was sentenced to 20 years in federal prison in the 2015 shooting death of Walter Scott. Slager's 2016 state murder trial ended in a mistrial.