Rex Tillerson's days as Secretary of State could be numbered, reports say 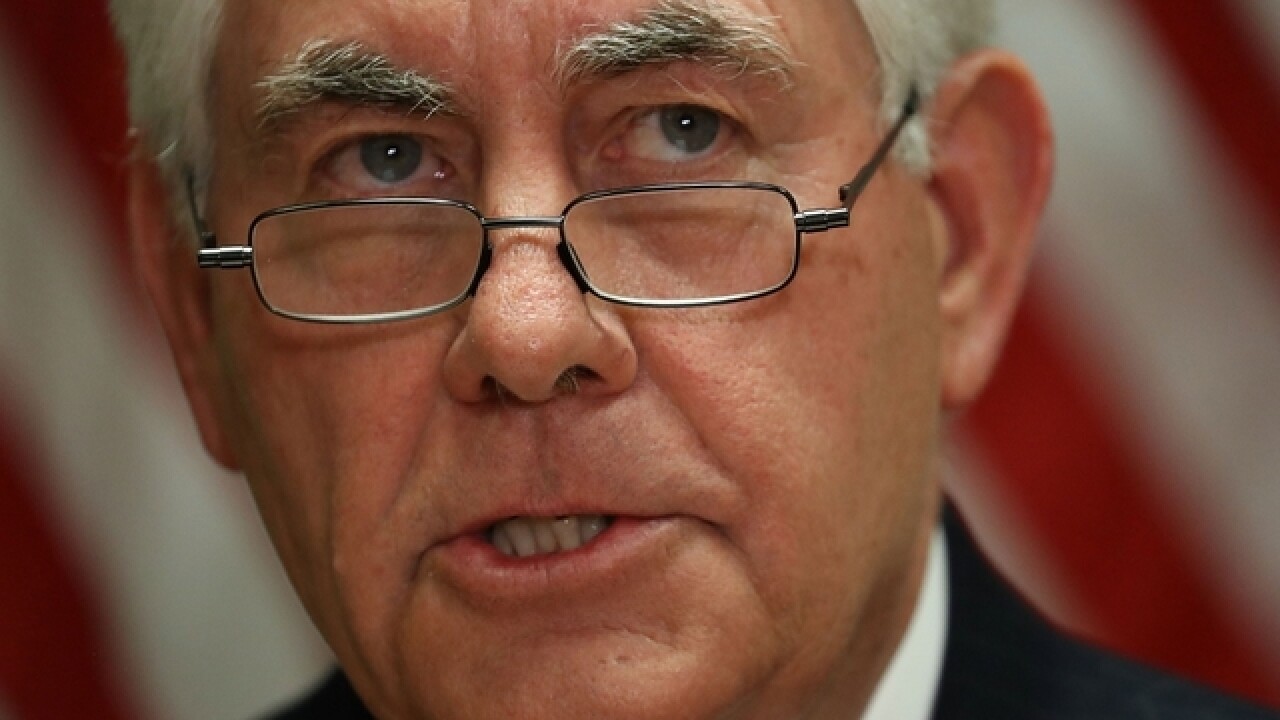 Secretary of State Rex Tillerson, the stone-faced former oil executive Donald Trump tapped to serve as his global envoy, is increasingly seen by administration officials and diplomats as on his way out -- just as flash-points from Iran to North Korea flare.

The impression that Tillerson's days as Trump's top diplomat are numbered was fueled this week by new reports of acrimony between the two men -- principally, that Tillerson had questioned Trump's intelligence to other top officials.

The episode prompted deep frustration from the President, who fumed that a supposed underling was insulting him to his cohorts. And it only seemed to cement his impression of Tillerson as a reluctant participant in Trump's foreign policy agenda, areas of which the two men have had public disagreements about.

More than a dozen sources inside the administration and in diplomatic circles describe the relationship between Tillerson and Trump as reaching a new low. The two men have failed to develop the type of close relationship that Trump enjoys with other members of his Cabinet. Radically different in personality, Tillerson and Trump have chafed at each other's perceived slights.

Tillerson has told friends he intends to remain in his post for at least a year, a psychological deadline that would allow him -- in his own mind -- to depart with dignity. But irritation with his boss, paired with frustration at the entrenched ways of Washington, have led him to waver at times.

There were indications this week that Tillerson would remain in his job for now, including public displays of support from Trump. A source familiar with the turmoil surrounding Tillerson says there is "no indication" the secretary's job is in jeopardy, at least not immediately.

This source said Tillerson remains focused on his job. "That's where his head is," the source said.

But few believe he will remain there for long.

This week, Tillerson insisted in public that he's never considered leaving the administration, and vowed to remain in his post "for as long as the President feels I can be useful to achieving his objectives."

Trump, however, has expressed frustration that Tillerson is stymieing aspects of his agenda. Trump grew furious on Wednesday when early morning news reports emerged that Tillerson had called him a "moron" during a meeting about Afghanistan over the summer. The public airing of the insult deeply angered the President, who vented on Twitter that the story amounted to "fake news."

Multiple sources told CNN that Trump was aware that Tillerson had used the word to describe him before the public report emerged, though it wasn't clear when he first learned of it. Having the information leaked, however, enraged him.

Early Wednesday, Tillerson spoke with Trump's chief of staff John Kelly by phone as the story aired on morning television. Both agreed that Tillerson should deliver a statement refuting aspects of the report, which also said he had considered resigning from his post.

"There's never been a consideration in my mind to leave," Tillerson said from the State Department Treaty Room.

But he did not deny calling Trump a "moron" when asked directly. Later, the State Department spokeswoman Heather Nauert said Tillerson told her he'd never used that language to describe the President.

After delivering his mid-morning statement, the secretary of state met at the White House with Kelly, who had remained behind in Washington as Trump flew cross-country to console survivors of Sunday's mass shooting in Las Vegas. The President viewed the statement from Air Force One and later, inside a hospital trauma center, insisted he remained confident in his top diplomat.

"Total confidence in Rex. I have total confidence," he said. He called the reports about Tillerson's "moron" comment "totally phony."

Speaking on Capitol Hill on Wednesday, the leading Republican on the Senate Foreign Relations Committee identified Tillerson and Kelly -- along with Defense Secretary James Mattis -- as critical members of the administration preventing the country from falling into disarray.

"I think Secretary Tillerson, Secretary Mattis and chief of staff Kelly are those people that help separate our country from chaos, and I support them very much," Sen. Bob Corker of Tennessee, said, adding Tillerson doesn't appear to have the full support of the President.

"I deal with people throughout the administration and (Tillerson), from my perspective, is in an incredibly frustrating place," Corker said.

Kelly and Tillerson have enjoyed a close relationship since the former Marine general took his post as chief of staff over the summer. Tillerson, who has long felt unsure in his role within the administration, gained a new sense of security with Kelly inside the White House, according to a person familiar with his thinking.

But he has continued to bristle amid differences with the White House. Last week, Trump undercut his position on talks with North Korea after Tillerson said in Beijing that the US has direct channels of communication with Pyongyang. Trump said on Twitter that Tillerson was "wasting him time." Differences also persist between the two men on the Iran nuclear deal, which Trump vowed to scrap as a candidate.

Trump, according to people familiar with the dynamic, has grown resentful of Tillerson's differing stances on those policy issues, believing his secretary of state to be overly dismissive at times.

At the same time, Trump's inner-circle, led by Kelly, has discouraged any further staff shakeups after a tumultuous eight months in office.

Trump is said to be cognizant that his administration and inner West Wing operation are shedding staff at an alarming clip. Trump has either dismissed or seen quit a chief of staff, national security adviser, press secretary, two communications directors, chief strategist, acting attorney general, FBI director and a Health and Human Services Secretary.

Trump, above all, wants to project a sense of competence and believes the rapid turnover of staff helps fuel the notion his administration is in chaos, according to a person familiar with his thinking.