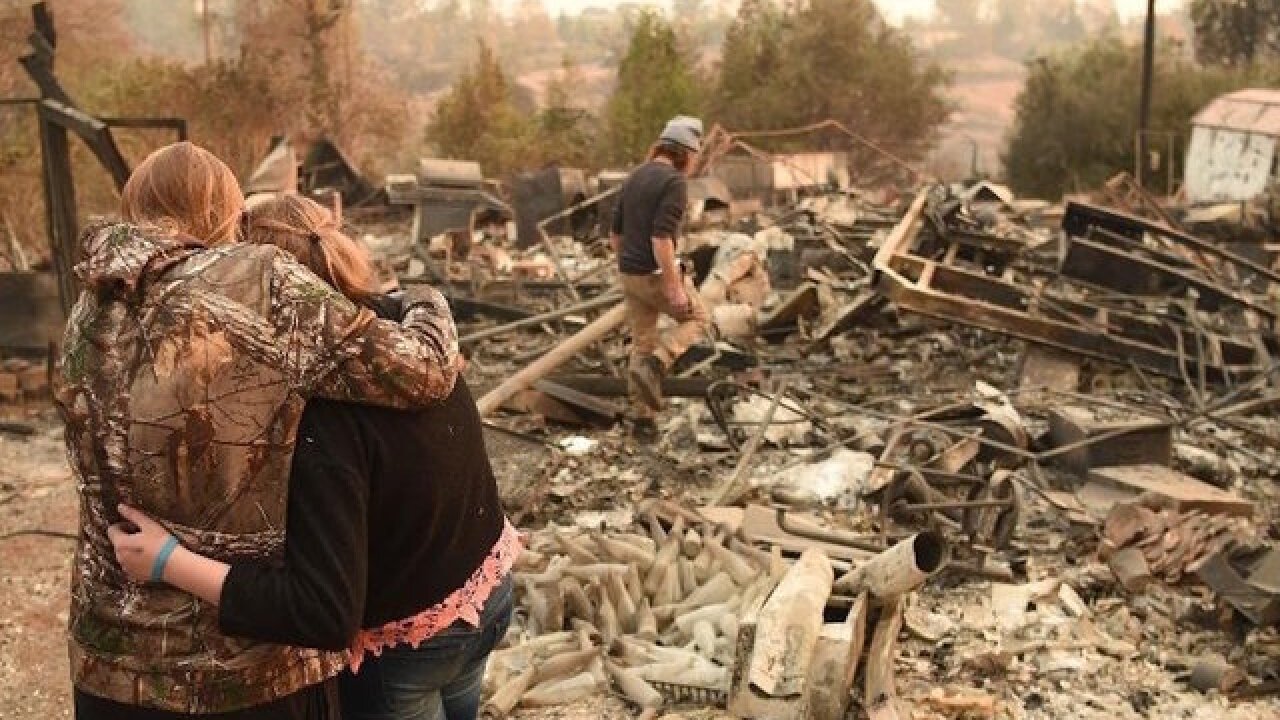 Image copyright 2018 Getty Images. All rights reserved. This material may not be published, broadcast, rewritten, or redistributed.
Josh Edelson/AFP/Getty Images
<p>The rain falling in some parts of Northern California could bring frustration to search crews, more suffering to displaced people and relief to firefighters battling the Camp Fire.</p>

While much-needed rain falling in parts of Northern California could help firefighters battling the deadly Camp Fire, it could also prompt powerful mudslides and debris flow, adding to the devastation for communities that have already been ravaged by the flames.

Authorities fear the showers -- even as they clear the choking smoke and help extinguish flames -- will trigger mudslides and floods in areas scarred by the Camp Fire, complicating the search for victims' remains. Rain could also pile on misery for people forced from their homes, some of whom are living in tent camps outside.

Two weeks after the devastating fire started, 563 people are unaccounted for, Butte County Sheriff and Coroner Kory Honea said. Of the 83 killed in the Camp Fire, at least 58 of them have been tentatively identified as rescue crews sift through debris, searching for more remains.

The rain could make the process of scouring through the ash and debris more complicated, and lead to treacherous conditions for firefighters, officials said.

It has been raining on and off for the past several hours in the town of Paradise, which was wiped out by the fire. A flash flood watch remains in effect through Friday morning, CNN meteorologist Gene Norman said.

1 million people are under a flash flood watch

Almost 1 million people are under a flash flood watch in that part of California. Rain began falling in Paradise on Wednesday, with nearly an inch dropped by late afternoon. Potential downpours could end the fire season or at least ease the risk while bringing new dangers.

Between Thursday and Saturday, the northern part of the state could see up to 2 inches of rain in valley areas and as much as 4 to 8 inches of rain at higher elevations, according to Idamis Del Valle, a meteorologist for the National Weather Service in Sacramento.

The weather system will be the first to have brought "significant precipitation" to the area in some time, Del Valle said, and could help firefighters battling the blaze. But it also poses new risks.

"The area has been dry for a while, so it's great to have beneficial rain," she said. "Although if it comes in high intensive rates then that could lead to debris flows on new burn scars."

"They're basically fast-moving, deadly landslides," Del Valle said of debris flows. They're made up of loose mud, soil and rock, and can occur over the burn scars left by wildfires up to a year old.

Search for missing to be 'much more difficult'

The first bout of heavy rain is expected to hit Butte County. The heaviest amounts will come Thursday afternoon through Friday afternoon, with between 2.5 and 4 inches expected during that 24-hour period.

When the rain comes, it's going to have major effects on the debris.

"It's going to consolidate the material and make it more dense. And it's going to present much more like soil. So anything we find or hope to find that's still there, it's going to make a difficult task ... that much more difficult," said Brian Ferreira, rescue squad officer for California Task Force 4.

In Paradise, the storms could cause ash flows, or a slurry of ash swept away by rainwater.

The Camp Fire has charred more than 153,000 acres and was 85% contained Thursday morning. It has destroyed more than 13,500 homes.

Evacuees flee, some brace for flooding

Across Butte County, residents prepared for a possible deluge.

Jennifer Debrunner is staying at the Butte County Fairgrounds in a motor home loaned by a stranger. She told CNN affiliate KCRA that her family covered everything they own with a tarp.

Cady Machado has been camping out in a Walmart parking lot with her husband and 9-month-old baby.

Due to the expected rain, Machado told CNN affiliate KTXL, she's sending her child to her sister's in Arizona.

As for herself and her husband?

"There's a nice bridge with my name on it to go underneath where I won't get flooded out with my husband," she told KTXL.

Rain also is expected in Southern California, where the Woolsey Fire has killed three people and torched nearly 100,000 acres. It's now 100% contained.

The Woolsey burn area is expected to get less than an inch of rain. But it's still at risk of mudslides and minor debris flow from Wednesday to Thursday, the National Weather Service said.