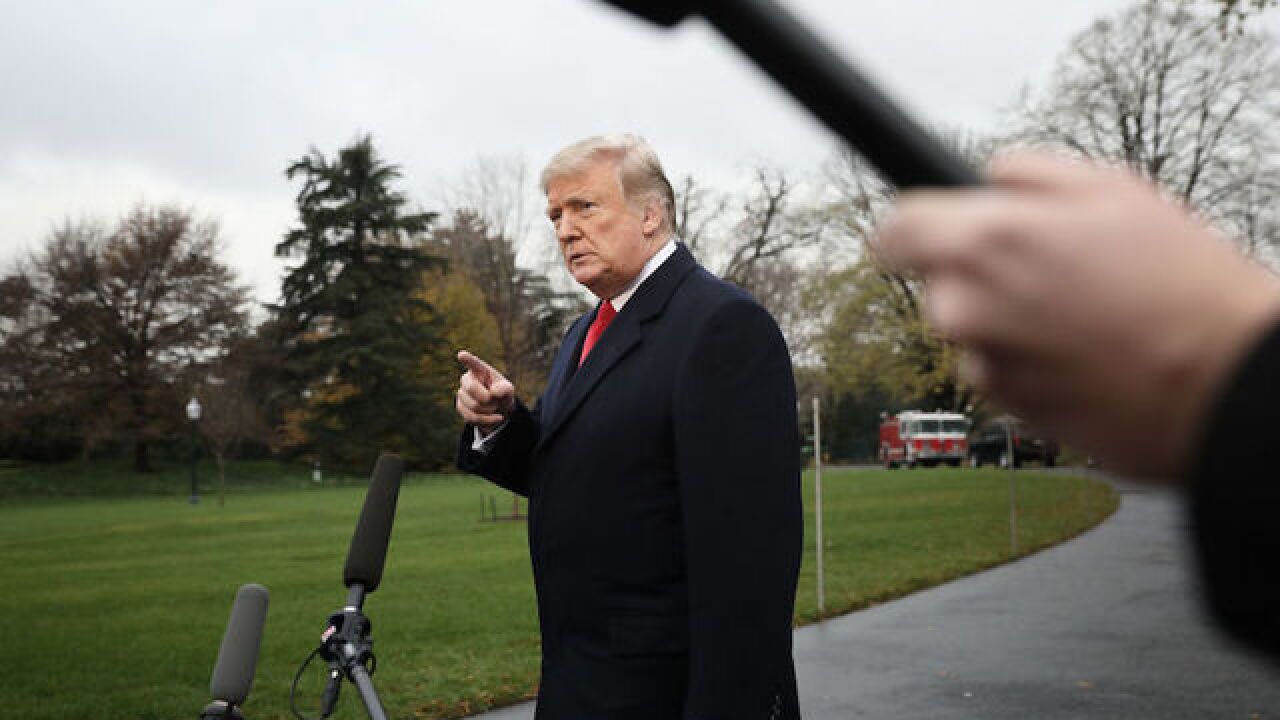 WASHINGTON, D.C. — A new US government report delivers a dire warning about climate change and its devastating impacts, saying the economy could lose hundreds of billions of dollars -- or, in the worst-case scenario, more than 10% of its GDP -- by the end of the century.

The federally mandated study was supposed to come out in December but was released by the Trump administration on Friday, at a time when many Americans are on a long holiday weekend, distracted by family and shopping.

David Easterling, director of the Technical Support Unit at the NOAA National Centers for Environmental Information, emphasized that there was "no external interference in the report's development." He added that the climate change the Earth is experiencing is unlike any other.

"The global average temperature is much higher and is rising more rapidly than anything modern civilization has experienced, and this warming trend can only be explained by human activities," Easterling said.

Coming from the US Global Change Research Program, a team of 13 federal agencies, the Fourth National Climate Assessment was put together with the help of 1,000 people, including 300 leading scientists, roughly half from outside the government.

It's the second of two volumes. The first, released in November 2017, concluded that there is "no convincing alternative explanation" for the changing climate other than "human activities, especially emissions of greenhouse gases."

On Wednesday, Trump tweeted, "Whatever happened to Global Warming?" as some Americans faced the coldest Thanksgiving in over a century.

But the science explained in these and other federal government reports is clear: Climate change is not disproved by the extreme weather of one day or a week; it's demonstrated by long-term trends. Humans are living with the warmest temperatures in modern history. Even if the best-case scenario were to happen and greenhouse gas emissions were to drop to nothing, the world is on track to warm 1.1 degrees Fahrenheit.

As of now, not a single G20 country is meeting climate targets, research shows.

Without significant reductions in greenhouse emissions, the annual average global temperature could increase 9 degrees Fahrenheit (5 Celsius) or more by the end of this century, compared with preindustrial temperatures, the report says.

The costs of climate change could reach hundreds of billions of dollars annually, according to the report. The Southeast alone will probably lose over a half a billion labor hours by 2100 due to extreme heat.

Farmers will face extremely tough times. The quality and quantity of their crops will decline across the country due to higher temperatures, drought and flooding. In parts of the Midwest, farms will be able to produce less than 75% of the corn they produce today, and the southern part of the region could lose more than 25% of its soybean yield.

Heat stress could cause average dairy production to fall between 0.60% and 1.35% over the next 12 years -- having already cost the industry $1.2 billion from heat stress in 2010.

When it comes to shellfish there will be a $230 million loss by the end of the century due to ocean acidification, which is already killing off shellfish and corals. Red tides, or algae bloom that deplete oxygen in the water and can kill sea life -- like those that triggered a state of emergency in Florida in August -- will become more frequent.

Impacts on our health

Higher temperatures will also kill more people, the report says. The Midwest alone, which is predicted to have the largest increase in extreme temperature, will see an additional 2,000 premature deaths per year by 2090.

There will be more mosquito- and tickborne diseases like Zika, dengue and chikungunya. West Nile cases are expected to more than double by 2050 due to increasing temperatures.

Expect asthma and allergies to be worse due to climate change.

No one's health is immune from climate change, the report concludes. People will be exposed to more foodborne and waterborne diseases. Particularly vulnerable to higher temperatures in the summer, children, the elderly, the poor and communities of color will be at a much greater risk for illness and death.

Wildfire seasons -- already longer and more destructive than before -- could burn up to six times more forest area annually by 2050 in parts of the United States. Burned areas in Southwestern California alone could double by 2050.

Dependable and safe water for the Hawaii, the Caribbean and others are threatened by these rising temperatures.

Along the US coasts, public infrastructure and $1 trillion in national wealth held in real estate are threatened by rising sea levels, flooding and storm surges.

Energy systems will be taxed, meaning more blackouts and power failures, and the potential loss in some sectors could reach hundreds of billions of dollars per year by the end of the century, the report said.

The number of days over 100 degrees Fahrenheit will multiply; Chicago, where these days are rare, could start to resemble Phoenix or Las Vegas, with up to two months worth of these scorching-hot days.

Sea levels have already gone up 7 to 8 inches since 1900. Almost half that rise has been since 1993, a rate of rise greater than during any century in the past 2,800 years. Some countries are already seeing land underwater.

By midcentury, it's likely that the Arctic will lose all sea ice in late summer, and that could lead to more permafrost thaw, according to the report. As the permafrost thaws, more carbon dioxide and methane would be released, amplifying human-induced warming, "possibly significantly."

What can be done

The report was created to inform policy-makers and makes no specific recommendations on how to remedy the problem. However, it suggests that if the United States immediately reduced its fossil fuel use and greenhouse gas emissions, it could save thousands of lives and generate billions of dollars in benefits for the country.

The Defense Department is trying to understand what risk climate change poses to security. But the Trump administration has signaled that the country will pull out of international initiatives like the Paris climate accord, aimed at lowering global temperatures, claiming that these treaties have been unfair for the US economy.

A report from the UN in October urged all governments to take "rapid, far-reaching and unprecedented changes in all aspects of society" to avoid disaster from climate change. That report predicted that the Earth will reach the crucial threshold of 1.5 degrees Celsius (2.7 degrees Fahrenheit) above pre-industrial levels by as early as 2030. It also suggested the world faces a risk of extreme drought, wildfires, floods and food shortages for hundreds of millions of people.

Reactions to the new report have been strong across the scientific community.

"If we're going to run this country like a business, it's time to address climate as the threat multiplier we know it is before more lives are lost," said Robert Bullard, an environmental scientist at Texas Southern University.

"In Houston, communities of color have endured back to back major weather events without the acknowledgment from Washington that climate change is the cause. We've known for years that it's true and it's important to our organizing and our local policy efforts that information like this is not only considered, but believed and acted upon."

Scientists who have been raising the alarm about the negative consequences of climate change for years welcomed the findings.

"The findings in the Trump administration's NCA report show how the health and daily lives of Americans are becoming more and more interrupted because of climate change," said Beverly Wright, founding director of the Deep South Center for Environmental Justice and a professor at Dillard University. "We challenge the administration to finally begin using this information to rebuild and strengthen the communities in the direct path of the atrocities wrought by the fossil fuel industry and decades of poor policies that have neglected our concerns. The science is undeniable, let's fix it."