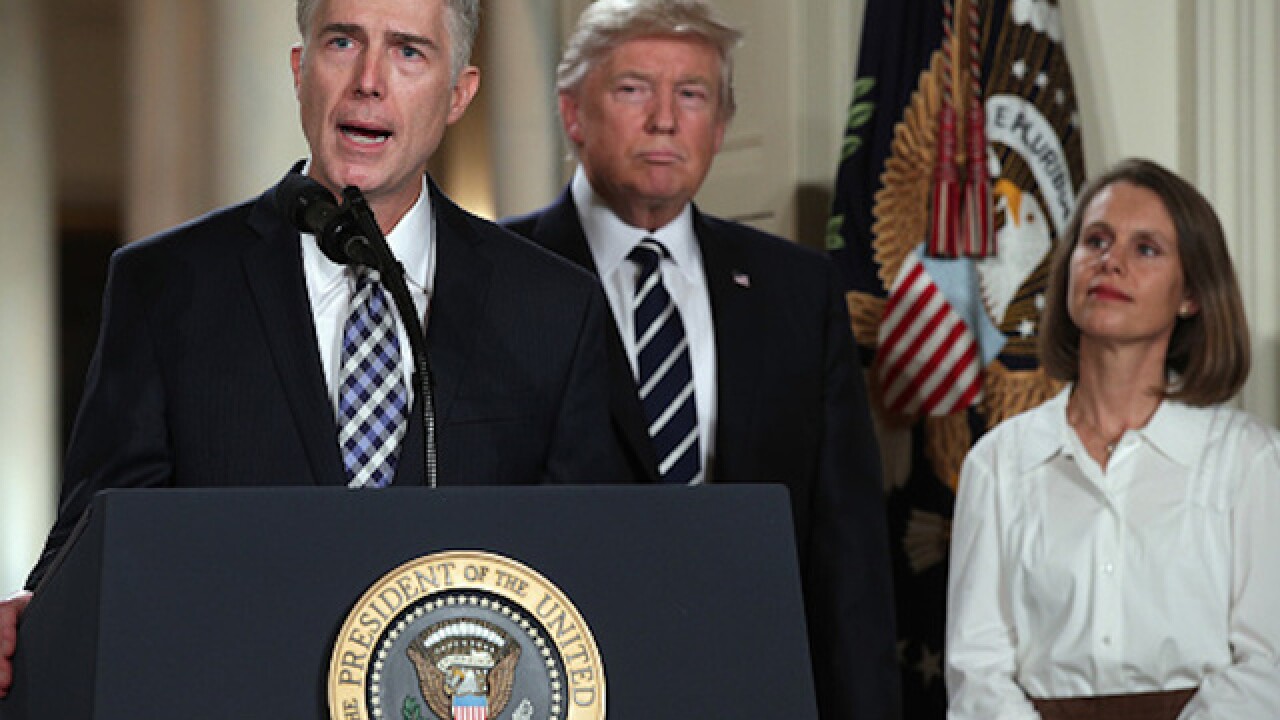 Copyright 2017 Scripps Media, Inc. All rights reserved. This material may not be published, broadcast, rewritten, or redistributed.
Alex Wong
<p>WASHINGTON, DC - JANUARY 31: Judge Neil Gorsuch delivers brief remarks after being nominated by U.S. President Donald Trump to the Supreme Court with his wife Marie Louise Gorshuch during a ceremony in the East Room of the White House January 31, 2017 in Washington, DC. If confirmed, Gorsuch would fill the seat left vacant with the death of Associate Justice Antonin Scalia in February 2016. (Photo by Alex Wong/Getty Images)</p>

President Donald Trump disputed a Washington Post story Tuesday alleging that he considered pulling his nomination of Neil Gorsuch to the Supreme Court after Gorsuch privately criticized Trump's attacks on the judiciary.

"A story in the @washingtonpost that I was close to "rescinding" the nomination of Justice Gorsuch prior to confirmation is FAKE NEWS," Trump tweeted. "I never even wavered and am very proud of him and the job he is doing as a Justice of the U.S. Supreme Court. The unnamed sources don't exist!"

Trump had launched into a series of attacks against federal judges who had ruled to stop his travel ban on Muslim-majority countries during Gorsuch's confirmation process, leaving the Supreme Court nominee to field questions from senators about the comments.

Gorsuch told Sen. Richard Blumenthal, D-Connecticut, and others that he found Trump's attacks "disheartening" and demoralizing," comments that were quickly confirmed by Ron Bonjean, Gorsuch's White House spokesman for the confirmation process.

The Washington Post, citing 11 sources familiar with the episode, reported Monday night that the comments left Trump fuming at the time, worrying that his nominee would not be "loyal" on the bench and considered pulling his nomination.

But while Trump criticized the Post story, the President was also clearly irked by the incident at the time, lashing out on Twitter by accusing Blumenthal of having misrepresented Gorsuch's comments.

A story in the @washingtonpost that I was close to “rescinding” the nomination of Justice Gorsuch prior to confirmation is FAKE NEWS. I never even wavered and am very proud of him and the job he is doing as a Justice of the U.S. Supreme Court. The unnamed sources don’t exist!

Gorsuch's comments -- and Bonjean's confirmation of them -- appeared to be a strategic attempt by the White House to put some distance between Gorsuch, who was seeking a lifetime appointment to the Supreme Court, and the President's caustic comments about the judiciary. But it quickly became apparent that Trump had not been informed or bought into the strategy.

Trump told aides he felt Gorsuch had been insufficiently grateful, but a personal letter Gorsuch penned to the President thanking him for mentioning him during a joint address to Congress and calling it "magnificent" appeared to assuage those concerns.

White House legislative director Marc Short told the Post that "the process obviously caused frustration," but disputed the notion that Gorsuch's nomination was ever in jeopardy.

"As head of legislative affairs, our team was in charge of his nomination, and never did I view his nomination in jeopardy, nor did the president ever suggest to me that he wanted to pull him," Short said. "The process obviously caused frustration, but that frustration was compounded by the fact that Gorsuch had sent him a personal letter that he never received."