President Trump calls for an end to Obamacare in scathing speech 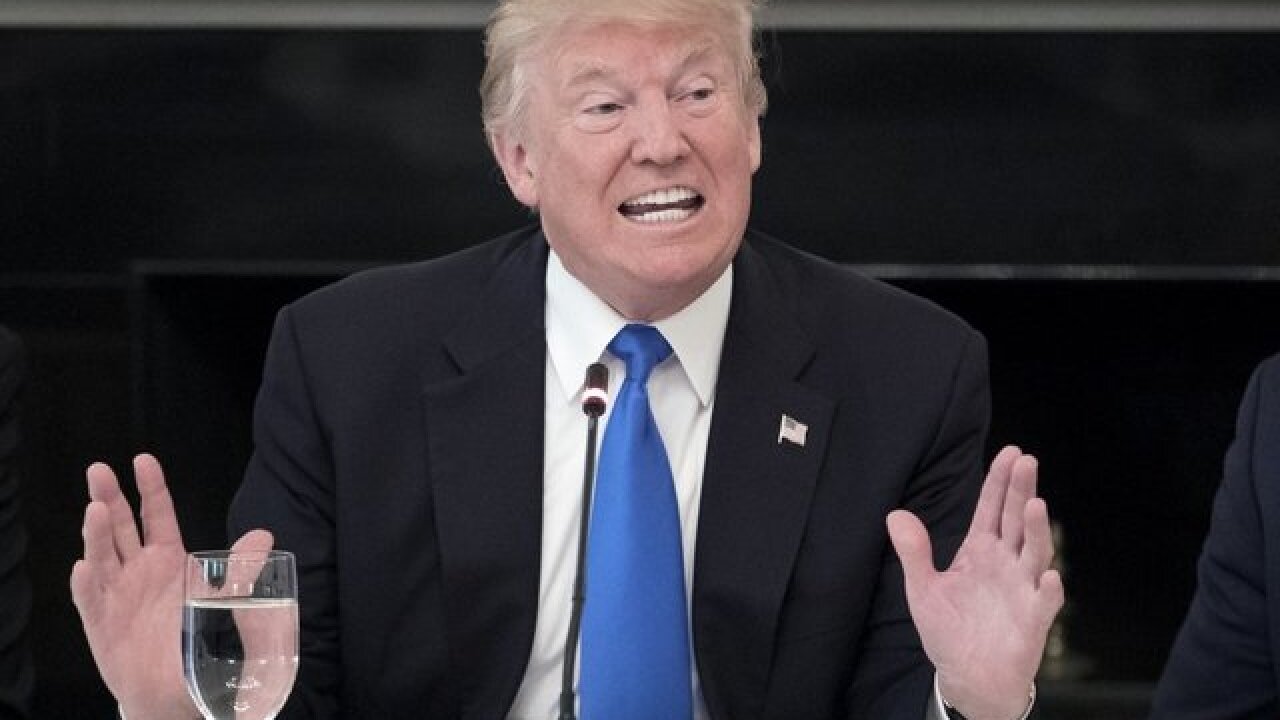 President Donald Trump unleashed a blistering critique of the Affordable Care Act at the White House on Monday and ratcheted up the pressure on Senate Republicans to keep their campaign promise to repeal and replace the law.

Speaking on the eve of the Senate's critical vote that could seal the fate of Republican efforts to repeal Obamacare, Trump drew on the stories of struggle of Americans who joined him at the White House to remind Republicans of their seven year-old promise to repeal and replace Obamacare.

"For the last seven years, Republicans have been united in standing up for Obamacare's victims. Remember repeal and replace, repeal and replace, they kept saying it over and over again. Every Republican running for office promised immediate relief from this disastrous law," Trump said. "We, as a party, must fulfill that solemn promise to the voters of this country to repeal and replace.

"But so far, Senate Republicans have not done their job in ending the Obamacare nightmare. They now have a chance however to hopefully -- hopefully -- fix what has been so badly broken for such a long time and that is through replacement of a horrible, disaster known as Obamacare," Trump added.

The plan is for the Senate to take a major procedural vote Tuesday to advance the bill to overhaul health care Tuesday, the No. 2 Senate Republican, Sen. John Cornyn, told reporters.

What exactly lawmakers will ultimately be voting for, however, remains unclear.

Cornyn, asked what leadership ultimately wants the bill to be at the end, said: "We're not quite there yet."

A simple majority is needed to pass the motion to proceed, and Republicans can only afford to lose two votes, something made more difficult with GOP Sen. John McCain remaining at home in Arizona as he recovers from surgery.

Trump weaved the stories of several Americans who have experienced the pitfalls of Obamacare firsthand into his effort to pressure Republicans.

He noted the story of Steve Finn, a former police officer who faced "skyrocketing costs" and told the story of Marjorie and Kevin Weer who were "emotionally and financially devastated" as they tried to get their son care for his Spina Bifida through an Obamacare plan.

"Tomorrow, the Senate will vote on whether to allow this urgently needed bill to come to the Senate floor for debate. The question for every senator, Democrat or Republican, is whether they will side with Obamacare's architects, which have been so destructive to our country, or with its forgotten victims. Any senator who votes against starting debate is telling America that you are fine with the Obamacare nightmare, which is what it is."

What are senators voting on?

Majority Leader Mitch McConnell had announced last week -- after a repeal and replace bill seemed immovable -- that the Senate would vote on a 2015 bill to repeal Obamacare. Trump then told senators during a lunch at the White House that he wanted them to bring up a repeal-and-replace bill they'd been crafting for months.

"Apparently that's created some heartburn," Cornyn said of McConnell announcing senators would vote on the 2015 bill. "But the point is I think it's a mistake to look at the sequence of the vote because every provision has a right to a vote."

"That's a big misunderstanding.... Everybody who wants to vote whether it's on the 2015 bill or the Cassidy-Collins bill or the Graham-Cassidy bill -- everybody's gonna get a chance to vote on everything," Cornyn said, emphasizing a process that could allow for open amendments that could begin if senators approve the motion Tuesday.

Speaking to reporters after an event with congressional Democrats event in Berryville, Virginia, Senate Minority Leader Chuck Schumer said "no one knows" what the plan is.

"Not only am I not aware but when I talk to my Republican colleagues, at least of this morning, they were not aware," Schumer, D-New York, said. "No one knows what Leader McConnell is going to put on the floor and that's causing a lot of consternation, not just among Democrats but among Republicans as well."

Vermont Sen. Bernie Sanders on Monday called the GOP health care legislation "the cruelest, most destructive and irresponsible piece of legislation" brought to the Senate in modern history.

During a speech at the NAACP convention in Baltimore, Sanders railed against the bill, saying it would "throw 22 million Americans off of the health insurance they currently have," including those with life-threatening diseases.

"Let me be as clear as I can be, and I don't mean to engage in hyperbole here because I am not, this legislation...is the cruelest, most destructive and irresponsible piece of legislation ever brought in the United States Senate in the modern history of this country," Sanders said.