CLEVELAND — A Cleveland website is facing backlash after attempting to be humorous about the foreclosure crisis and sex trafficking.

In the now deleted post, the site said "the foreclosure crisis left a lot of empty gingerbread houses around Cleveland. Many end up becoming dens for cracker addicts." It also mentioned "gingerbread sex slaves." 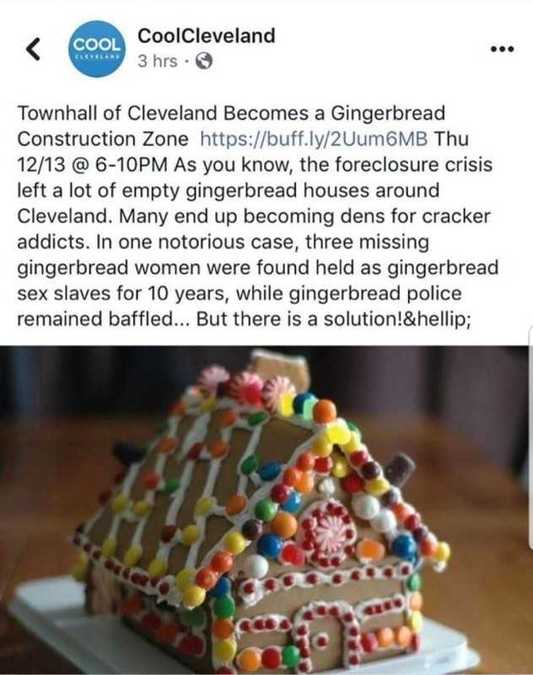 A spokesperson for TownHall said they were upset by the post.

"We are appalled by the article written by Cool Cleveland. We had no prior knowledge of the article, nor did we approve the article in any way.  The moment we saw the post, I personally called Cool Cleveland to express the inappropriateness and requested it be taken down immediately," Director of Communications Kayla Barnes said.

A publisher for Coolcleveland.com apologized for the post and wanted others to know TownHall was not responsible for the content.

You can read the full apology below:

On behalf of CoolCleveland, our writers, staff and contributors, I personally apologize for the inexcusable and inappropriate post earlier today that attempted to promote an event with a poor attempt at humor.

It is never OK to make light of such serious issues, and I take full and personal responsibility for this post ever being published.

We apologize to anyone who may have read this egregious post, to victims and survivors, and to the community of Cleveland. When we started CoolCleveland over 16 years ago, it was to help and support the cool events, cool people and cool venues in our region, not to cause further harm and pain.

We want to make it clear that Townhall is not responsible for any content in the post, and we sincerely apologize to the people involved with Townhall for associating them with this language and sentiment. We have personally apologized to the management at Townhall and are working with them to ensure that they are not further harmed by this post.

We are committed to doing everything in our power to help right this wrong, although we realize that words have power, and we have violated a trust with our readers and community. We have made a contribution to a non-profit organization that helps survivors and victims, and we are making arrangements for training for our writers, staff and contributors.

However, I want to reiterate that full responsibility for this issue rests on my shoulders personally. We have made immediate changes to our staffing. Although we had installed safeguards to ensure content review, we have now instituted a more rigorous internal system to ensure that all content published by CoolCleveland meets our standards and continues to help the community and promote the coolness all around us. Because this community is cool. — Thomas Mulready, publisher, CoolCleveland.