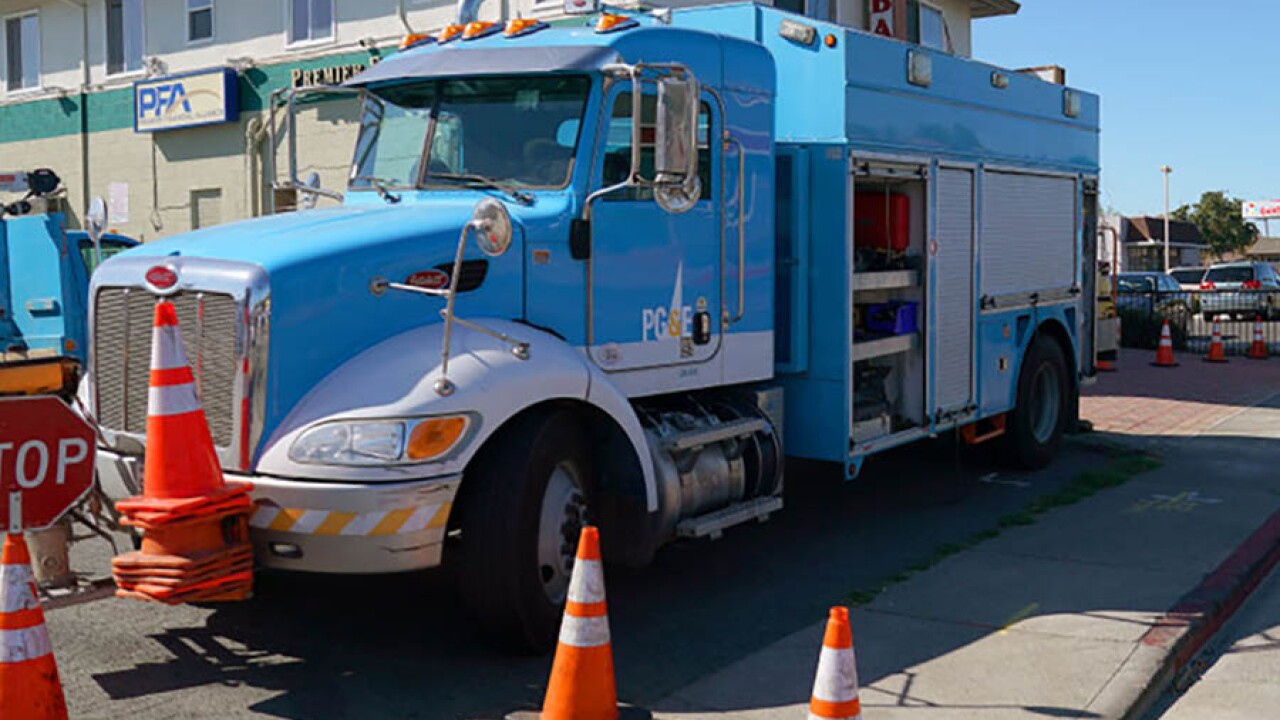 SONOMA, Calif. (AP) - More than 1.5 million people in Northern California were in the dark Thursday, most for a second day, after the state's biggest utility shut off electricity to many areas to prevent its equipment from sparking wildfires as strong winds sweep through.

Unprecedented in scope, the deliberate outages by Pacific Gas & Electric forced schools and businesses to close and otherwise disrupted life for many people, bringing criticism down on the company from the governor and ordinary customers alike.

PG&E cast the blackouts as a matter of public safety, aimed at preventing the kind of blazes that have killed scores of people over the past couple of years, destroyed thousands of homes, and run up tens of billions of dollars in claims that drove the utility into bankruptcy.

The shut-offs could be just a glimpse of the what lies ahead for California as climate change contributes to more ferocious blazes and longer fire seasons.

"It's just kind of scary. It feels worse than Y2K. We don't know how long," Tianna Pasche of Oakland said before her area was powered down. "My two kids, their school situation keeps moving every second. It's not clear if we need to pack for a week and go out of town or what to do. So I'm just trying to make sure we have water, food, charging stations and gas."

But she added: "If it saves a life, I'm not going to complain about it."

On Wednesday, PG&E cut power to an estimated 600,000 customers in the San Francisco Bay Area — where wind gusts reached 70 mph (110 kph) early Thursday — as well as wine country north of San Francisco, the agricultural Central Valley and the Sierra Nevada foothills, where a November wildfire blamed on PG&E transmission lines killed 85 people and all but incinerated the town of Paradise. The city of San Francisco itself was not in the shut-off zone.

PG&E warned that customers might have to do without power for days after the winds subside because "every inch" of the system must be inspected by helicopters and thousands of workers on the ground and declared safe before the grid is reactivated.

Ahead of the outages, announced earlier this week, Californians rushed to stock up on flashlights, batteries, bottled water, ice and coolers, took money out of ATMs and filled their gas tanks.

The University of California, Berkeley canceled classes for a second day because the campus had no electricity. Oakland closed several schools.

One of the areas where the power was shut off was the suburban town of Moraga, where about 100 homes were ordered evacuated as a wildfire spread in the hills early Thursday.

Gov. Gavin Newsom said PG&E should have been working on making its power system sturdier and more weatherproof.

"They're in bankruptcy due to their terrible management going back decades," he said. "They've created these conditions. It was unnecessary."

Faced with customer anger, PG&E put up barricades around its San Francisco headquarters. A customer threw eggs at a PG&E office in Oroville. A PG&E truck was hit by a bullet, but authorities could not immediately say whether it was targeted.

"We realize and understand the impact and the hardship," said Sumeet Singh, head of PG&E's Community Wildfire Safety Program. But he urged people not to take it out on PG&E employees.

In the El Dorado Hills east of Sacramento, Ruth Self and her son took the outage there in stride while leaving a Safeway supermarket that had been stripped nearly bare of bottled water and ice. Self said she wasn't upset, given the lives lost in Paradise, where people were burned in their cars trying to escape.

"I just can't imagine," she said. "Hopefully (the outages) are only for a couple days. I think it's more of a positive than a negative. Ask me again on Friday night when I haven't had a shower in two days, when I've had to spend two days playing card games."

Meanwhile, Southern California Edison warned that it might cut power to nearly 174,000 customers in nine counties, including Los Angeles. San Diego Gas & Electric notified about 30,000 customers they could lose electricity in backcountry areas.