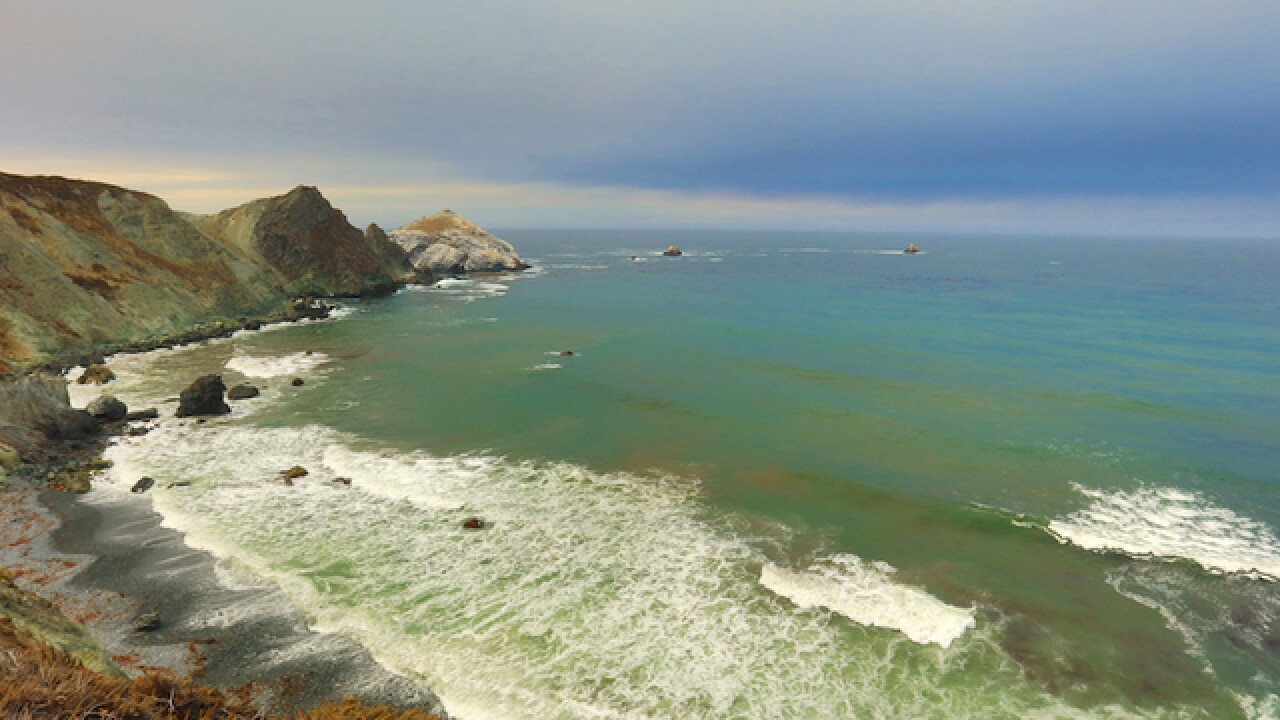 Image copyright 2018 Getty Images. All rights reserved. This material may not be published, broadcast, rewritten, or redistributed.
Mark Davis
<p>CARMEL, CA - SEPTEMBER 12: A view of the coastline at the Walk, Run and Ride during Best Buddies Hearst Castle Challenge on September 12, 2015 in Carmel, California. (Photo by Mark Davis/Getty Images)</p>

The Trump administration's proposal to open vast portions of US coastline to oil drilling was met with ferocious opposition from a number of the coastal governors it would affect.

At least one governor, Florida's Rick Scott, a Republican, asked for and received a waiver from the administration.

That move by Interior Secretary Ryan Zinke drew accusations of favoritism, which have been denied. But the fact remains that nearly every governor with ocean coastline opposes drilling off their coast or, in one case, has concerns.

The map paints a startling picture of opposition to the drilling proposal.

The lone supporter is Maine's Republican Gov. Paul LePage. Gulf Coast governors who already have drilling off their shores are open to new exploration.

Here's a roundup of where the governors stand:

Georgia -- From Jen Talaber Ryan, deputy chief of staff for communications for Republican Gov. Nathan Deal: "The governor has some concerns with opening up Georgia's pristine coastlines which he will convey to the congressional delegation."

New Hampshire -- Republican Gov. Chris Sununu told reporters that "of course" he was against drilling off the New Hampshire coast.

"Governor Baker made clear to Secretary Zinke over six months ago that the administration opposes offshore drilling in the North Atlantic and is pleased to see that the Department of the Interior cites the Governor's opposition in their recently released draft report," Brendan Moss, Baker's deputy communications director, said Wednesday, noting that Interior's draft report cites Baker as someone opposed to the measure.

"The President is endangering the health of nearly all coastal waters in our country, including our 400 miles of coastline in Rhode Island, so that rich oil companies can get richer. The North Atlantic region is home to one of the most productive and sensitive marine ecosystems in the world, not to mention Rhode Island's tourism, recreation and fishing industries. We've taken action over the past few years to decrease our reliance on fossil fuels and invest in alternative energy sources. We are home to the nation's first offshore windfarm. We cannot take this step backwards. Now is the time for Rhode Islanders to make their voices heard and tell President Trump to protect our waters."

"This is yet another disgraceful and unnecessary action from an administration that has taken us light years backward in the fight against climate change. It stands only to hurt Connecticut's economy, our natural resources, and our coastal communities. We need a federal government that will stand up and protect our environment. Sadly, this president has once again put special interests before people."

"New York doesn't want drilling off our coast either. Where do we sign up for a waiver @SecretaryZinke?" Cuomo tweeted on Tuesday.

Christie's administration sent a letter to the Trump administration in August saying the governor "strongly opposes any waters off our coastline being considered for inclusion in this leasing program."

"We must stand firm against any plan for fossil fuel exploration, drilling, or development off the Atlantic Coast -- whether it be three miles, 30 miles, or 300 miles from New Jersey," Murphy told reporters earlier this month .

Maryland -- Republican Gov. Larry Hogan said his administration would use "any viable legal claims, actions or suits against the US government to prevent" it.

"Drilling for oil and gas in the Atlantic off Delaware's coast would create the risk of a catastrophic spill or other related disasters that would not only threaten our natural resources, but pose serious threats to Delaware's economy. More than 60,000 jobs are tied, directly and indirectly, to tourism and recreation along our coastline. Coast-related activities contribute almost $7 billion to our economy. We also have an obligation to take steps to confront climate change, and this takes us in the wrong direction. Delaware is our country's lowest-lying state, and the effects of sea-level rise pose significant risks. For all of these reasons, I continue to stand with Delawareans in opposing drilling off the coast of Delaware or elsewhere in the Atlantic, and we will continue to voice our opposition."

Virginia -- Democratic Gov. Terry McAuliffe has asked the Bureau of Ocean Energy Management to be excluded from any drilling plan .

"We'd like a word in Virginia," Northam tweeted in response to Zinke.

He added: "As soon as I heard about the Florida decision, I asked for a meeting, or at least a telephone call, with Secretary Zinke."

McMaster -- a vocal Trump supporter -- told reporters after the announcement that he disapproved of the decision because of the impacts he could have on tourism.

On Wednesday McMaster said he will take "appropriate steps" to counter it, according to video provided to CNN.

He added: "We cannot afford to take a chance with our beauty, our majesty and the economic value and vitality of our wonderful coastline in South Carolina."

When asked if he will push for a waiver from the Trump administration, McMaster said, "I will be taking appropriate steps and there will be more news later."

"For more than 30 years, our shared coastline has been protected from further federal drilling and we'll do whatever it takes to stop this reckless, short-sighted action," Brown, Oregon Gov. Kate Brown and Washington Gov. Jay Inslee -- the three West Coast governors, all Democrats -- said in a statement.

"For more than 30 years, our shared coastline has been protected from further federal drilling and we'll do whatever it takes to stop this reckless, short-sighted action," California Gov. Jerry Brown, Kate Brown and Washington Gov. Jay Inslee -- the three West Coast governors, all Democrats -- said in a statement.

"For more than 30 years, our shared coastline has been protected from further federal drilling and we'll do whatever it takes to stop this reckless, short-sighted action," California Gov. Jerry Brown, Oregon Gov. Kate Brown and Inslee -- the three West Coast governors, all Democrats -- said in a statement.

Inslee sent a letter to Zinke on Thursday asking for Washington to be removed from the plan. "I write to express to you my strong opposition to newly proposed oil and gas leasing off of Washington State's coast, and the Pacific Coast. Specifically, I urge you to remove this area from the 2019-2024 Draft Proposed National Outer Continental Shelf Oil and Gas Leasing Program issued by your department last week, which would expand oil and gas drilling off the Pacific Coast for the first time in decades. I would also like to request a meeting with you to discuss this important topic," he wrote.

"The Governor has not yet had an opportunity to review the details of the new five-year National Outer Continental Shelf Oil and Gas Leasing Program recently issued by the Bureau of Ocean Energy Management (BOEM), but generally supports efforts to make good use of our indigenous resources and improve the United States' energy independence and security.

"The Governor supports BOEM's approach of beginning with a broad area in the initial proposed plan in order to allow public input and analysis of all available resources, with the expectation that significant regions will be excluded from the final plan based on environmental sensitivity, fishery industry concern, tourism value or other areas of specific concern. The Governor believes in a balanced approach that places a priority on protecting our environment and traditional industries but that does not close the door on jobs and lower energy costs for Maine people."

Several Gulf Coast governors and the governor of Alaska, all of whom already have drilling off their shores, seemed more open to the idea. Here are their statements.

Clay Chandler from Bryant's office: "Currently, there are no rules or regulations that permit drilling in the Mississippi Sound, which is the body of water between the coast and the Barrier Islands. Gov. Bryant would prefer any drilling activity be beyond the Barrier Islands, and not in the Sound. Based on my reading of the map, the administration's proposal would not encroach on that, making an exemption unnecessary."

Alabama -- Republican Gov. Kay Ivey: "President Donald Trump made clear his desire to ensure Americans can use our own natural resources to produce the energy vital to our economy and national security. As he has done time and again, President Trump has proven to the people of Alabama that he is a man of his word, and we are grateful to him and to Secretary Ryan Zinke for their determination to open a vast tract of American waters to oil and gas exploration. This decision is not only in the best interest of all Americans, it allows Gulf Coast states, like Alabama, to utilize our natural resources not only to provide energy for our nation, but increased economic opportunities for our people."

Jonathon Taylor, Walker's deputy press secretary, said, "Governor Walker continues to support resource development in areas of the outer continental shelf (OCS) and Secretary Zinke's initiation of the review and planning process. We expect during this review process that all stakeholders -- and especially local Alaska communities -- will be thoroughly engaged, and the details of plans and the areas offered for leasing may change based on this feedback. Secretary Zinke's efforts are another important step in Alaska's commitment and long history with safe resource development based on local input and involvement."