Navy admiral will plead guilty to lying in bribery case 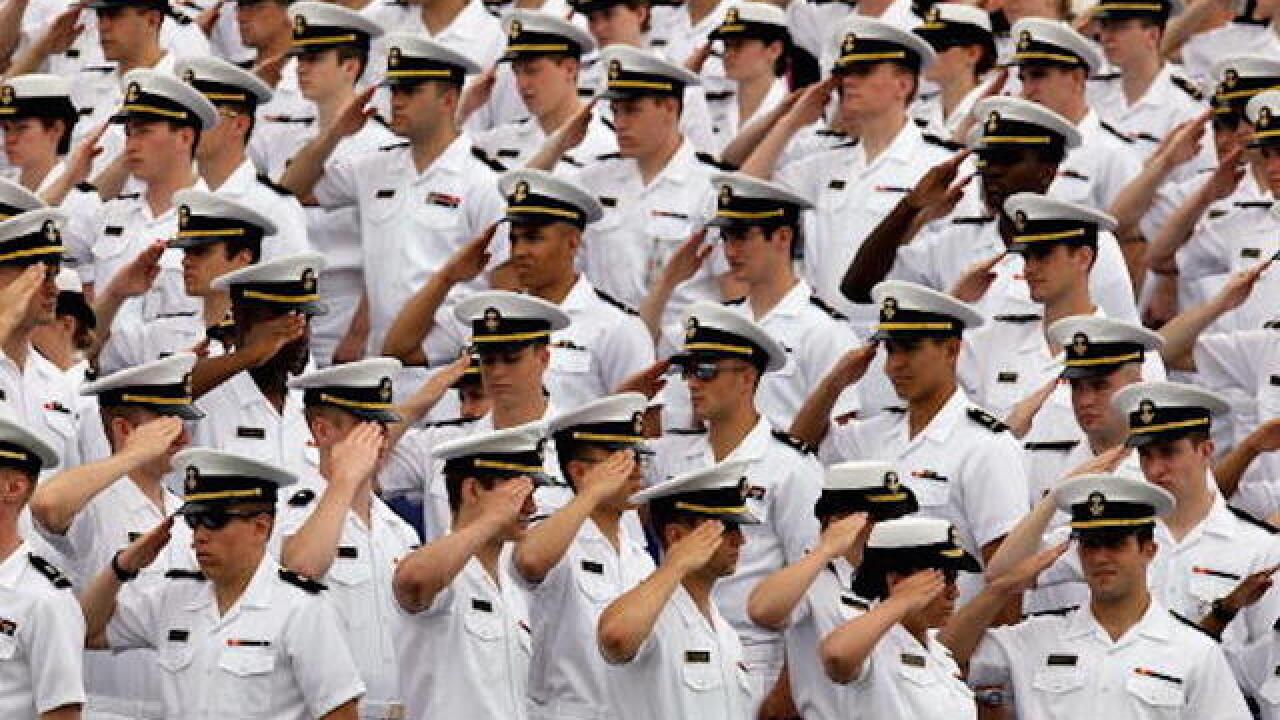 Chip Somodevilla
<p>ANNAPOLIS, MD - MAY 28: Underclass midshipmen stand and salute for the National Anthem during the graduation ceremony at the United States Naval Academy May 28, 2010 in Annapolis, Maryland. During the Naval Academy's 160th traditional graduation ceremony, 1,028 midshipmen, including 219 women, earned their commissions. (Photo by Chip Somodevilla/Getty Images)</p>

SAN DIEGO (AP) — A Navy admiral will plead guilty to lying to federal authorities investigating a Malaysian contractor known as "Fat Leonard," his attorney said, making him the highest-ranking military official to be taken down in the wide-spanning $34 million fraud scheme that has shaken the Navy.

It is extremely rare for an admiral to even face criminal proceedings.

Rear Adm. Robert Gilbeau planned to enter his plea at a federal court hearing in San Diego on Thursday to one count of making a false statement, said defense attorney David Benowitz.

"Rear Admiral Gilbeau did in fact make a false statement during the course of an important investigation," Benowitz said in a statement. "In this unfortunate situation, he accepts responsibility for the decisions he made and for his conduct."

Benowitz declined to comment further on what the lie involved. Gilbeau faces anywhere from probation to several months in jail, but Benowitz said he would "fight hard" to ensure his client — a decorated Naval officer — does not spend any time behind bars.

Gilbeau has not been charged like other Navy officials in the case with accepting any bribes from Leonard Glenn Francis, nicknamed "Fat Leonard," because of his wide girth. The contractor has admitted his Glenn Defense Marine Asia to bribing officials with more than $500,000 in cash, prostitutes, luxury hotel stays and a staggering amount of others gifts to Navy officials in exchange for classified information. That information then helped the company that services ships to either beat out the competition in bidding or to send ships to ports where it could grossly overcharge the Navy.

Francis' company — which has provided fuel, food and other services to Navy ships in Asia for two decades — overbilled the maritime branch by more than $34 million, according to court documents.

Three Navy admirals have been censured for accepting extravagant gifts and dinners costing thousands of dollars.

Gilbeau has spent 37 years in the Navy and is still on active duty. He was awarded the Bronze Star and Purple Heart during the 2007 Iraq surge. His most recent post was a desk job working as a special assistant to the commander of the U.S. Naval Supply Systems Command. He was moved to the position after the Navy learned he was being investigated.

Adm. John Richardson, chief of naval operations, said Gilbeau failed to meet the expectations the U.S. has of military members.

"It damages the trust that the nation places in us, and is an embarrassment to the Navy," he said.

Richardson said the Navy is fully cooperating with the Department of Justice in the investigation that has so far led to the convictions of more than a dozen people.

"We must hold ourselves accountable to the highest standards of behavior, and work tirelessly to restore any damage that has been done to these crucial relationships," Richardson said.

Prosecutors have said they are investigating as many as 200 people in one of the Navy's worst corruption cases.