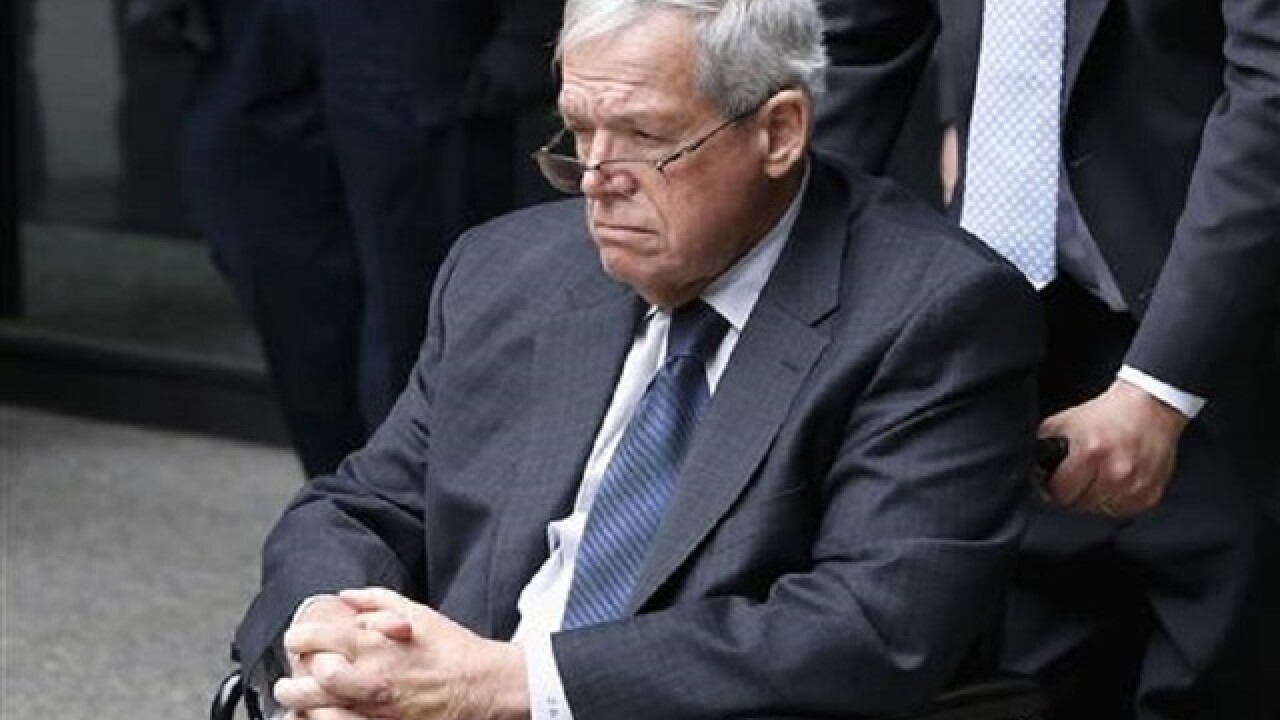 CHICAGO (AP) — Former U.S. House Speaker Dennis Hastert must report to a federal prison in southeastern Minnesota this week to begin serving a 15-month sentence in his hush-money case, one that revealed the 74-year-old sexually abused at least four boys decades ago when he coached wrestling at a suburban Chicago high school.
When he enters the prison gates, which he must do by Wednesday afternoon, the nation's longest-serving GOP speaker who for eight years was second in the line of succession to the presidency will be known to prison guards as Inmate No. 47991-424.
A look at what's expected to happen in the coming days and what awaits Hastert, who will become one of the highest-ranking U.S. politicians in history to do prison time:
___
WHEN AND WHERE
Hastert must show up at the Rochester Federal Medical Center by 2 p.m. Wednesday. Inmates-to-be usually wait until just before the reporting deadline, but Hastert, who has been free on bond, could choose to report earlier to elude a crush of reporters and TV cameras.
U.S. District Judge Thomas M. Durkin recommended this facility for the ailing Hastert during sentencing on April 27, though the Federal Bureau of Prisons made the final decision. Hastert's attorney, Thomas Green, confirmed it was the Rochester facility in an email.
___
PRISON PROCESSING
Hastert's lawyer didn't provide other details this week, and it's not known whether Hastert would travel the more than 300 miles from his Plano, Illinois, home to Rochester by car or plane.
When he arrives, he'll be subject to the same protocol as other new inmates, which includes a full-body strip search for contraband. Hastert will also trade in his street clothes for prison garb and be subject to psychological and social screening, according to an inmate-orientation guide.
___
THE FACILITY
The 64-acre prison specializes in health care for physically ailing or mentally ill inmates, and is near the Mayo Clinic. Hastert nearly died from a blood infection and suffered a stroke after he pleaded guilty on Oct. 28 last year, and has diabetes.
The facility, despite its name, has all the features of a prison. It is surrounded by razor-wire fencing and holds around 800 inmates from all security classifications, including convicted killers. Among them is Jared Lee Loughner, who is serving a life term for killing six people in the 2011 shooting that targeted and injured former Arizona Rep. Gabby Giffords.
During sentencing, Durkin pointed to the prison's large population of child molesters, saying it should lessen the chances Hastert would be singled out for attacks in a prison culture in which those who hurt children are considered the lowest of the low.
___
LIFE INSIDE
Hastert's life will be highly regimented, from frequent head counts to occasional shakedown searches. Internet access and cellphone use are prohibited. Recreational facilities include billiard tables and horseshoes.
All physically able inmates must work from 7:40 a.m. to 3:30 p.m. If he is required to take a job, the congressman-turned-high-paid lobbyist could end up mopping floors or doing yardwork for as little as 25 cents an hour.
___
AFTER PRISON
Under federal law, Hastert must serve at least 85 percent of his sentence, or about a year. Once released, he will have two years' supervised release. He would also have to undergo sex-offender treatment meant to reduce the danger sex offenders pose. A likely lie-detector test would seek to determine how many times Hastert sexually abused kids and over what time period.
___
CONVICTION AND SENTENCE
Hastert wasn't charged with child abuse because the statutes of limitation ran out since he coached at Yorkville High School from 1965 to 1981. Instead, Hastert was charged with and pleaded guilty to violating banking law in trying to pay $3.5 million in hush money to one victim referred to in court papers only as "Individual A."
Copyright 2016 The Associated Press. All rights reserved. This material may not be published, broadcast, rewritten or redistributed.