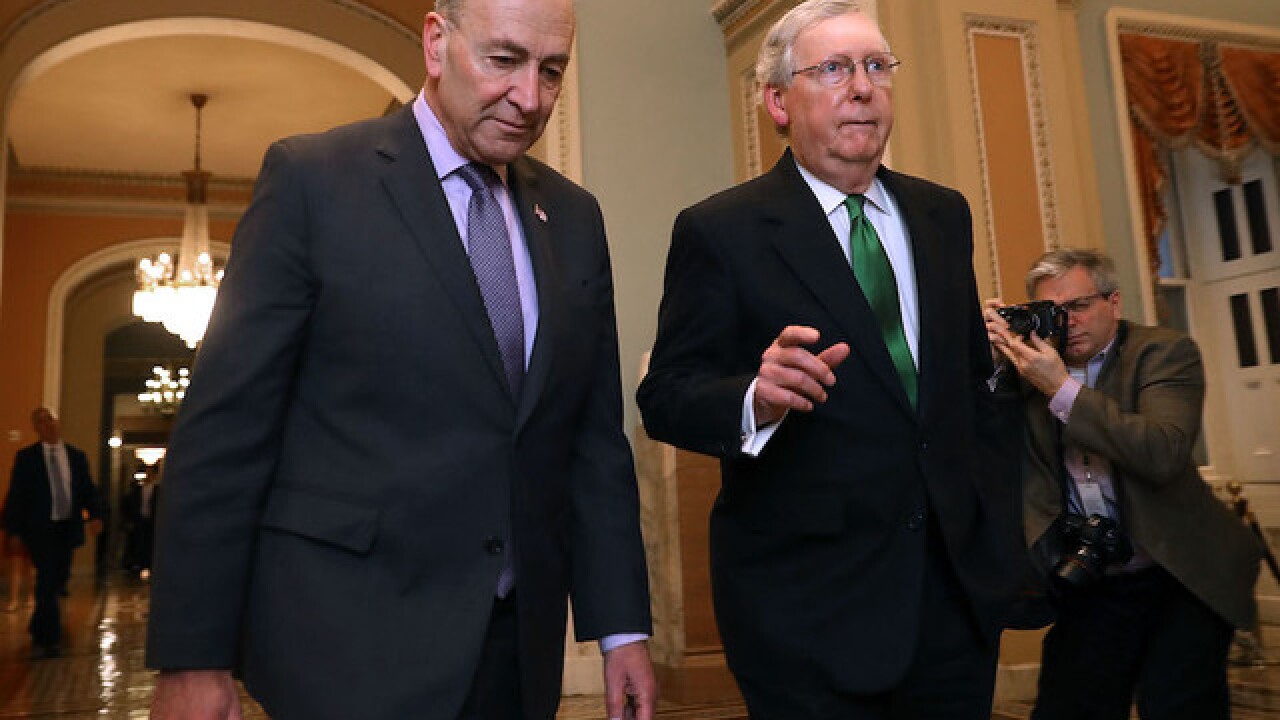 A contentious fight over immigration will dominate the agenda on Capitol Hill this week as the Senate is slated on Monday to open what could be a lengthy and free-wheeling floor debate on the polarizing and emotionally-charged issue.

Multiple votes on competing proposals are expected. Leaders and other senators close to the debate say they don't know how long it will take or if anything can pass.

The Senate showdown follows months of backroom talks over how to address those recipients of the Deferred Action for Childhood Arrivals program, a large group of people brought to the US illegally when they were children who were granted the ability to stay in the country under the Obama-era policy. President Donald Trump announced last year he would end the program and it is now set to expire next month.

In return for allowing DACA recipients to stay, Trump and many conservative Republicans are demanding guaranteed spending increases for border security, significant curbs on family migration -- also referred to by some Republicans as "chain migration" -- and the end of the diversity visa lottery program. But Democrats, and other GOP lawmakers, vehemently oppose taking those steps -- especially imposing those kinds of limits to family based immigration policy.

The debate was spurred, in part, by a decision by Senate Democrats last month to shut down the government unless Republicans allowed votes on legislation to fix DACA. McConnell committed that if the government remained open, he would schedule a debate this week.

Congress passed a broad budget bill in an overnight session Friday, keeping the government open for several more weeks and putting in place new spending levels for the next two years.

"The bill ... which will not have underlying immigration text, will have an amendment process that will ensure a level playing field," McConnell said in the early morning hours Friday. "While I obviously cannot guarantee any outcome, let alone super majority support, I can ensure the process is fair to all sides."

McConnell said the lawmakers would trade amendments back and forth until the issues was resolved or exhausted. Per Senate rules, 60 votes will be required for anything to pass.

"For many senators, it's a first introduction to Senate 101, how this place used to work," said Sen. Dick Durbin, a Democrat from Illinois and as whip is the second ranking Democrat in the chamber, who is heavily involved in the immigration issue, about the open amendment process.

Of course, getting a proposal through the Senate is just half the fight; getting a plan through the House, where GOP leader have not promised to take up what the Senate passes, is something different all together. House Speaker Paul Ryan has repeatedly said he's looking to Trump to back a proposal before committing that the House will act on the issue.

Democrats' memo in limbo after Trump prevents its release (for now)

On Friday night, White House counsel Don McGahn informed the House Intelligence Committee of Trump's decision not to release a memo from the panel's Democrats, writing in a letter that although Trump is "inclined to declassify" the memo spearheaded by the panel's top Democrat, California Rep. Adam Schiff, "he is unable to do so at this time."

Schiff's memo rebuts allegations in another document from the committee's Republicans that accuses the FBI suppressing Democratic ties to an opposition research dossier on Trump and Russia used in the Foreign Intelligence Surveillance Act warrant for former Trump campaign foreign policy adviser Carter Page. That memo, spearheaded by the panel's chairman, Rep. Devin Nunes of California, was released earlier this month.

The House Intelligence Committee will consider its next steps after Trump blocked the release of the Democratic memo, demanding changes first because he said it contains material that should remain classified.

Democrats slammed the move to stop the release of their memo, calling Trump's decision hypocritical and part of a pattern of the administration's attempts to thwart or undermine the Russia investigations.

RELATED: Trump's block of a memo is a block of checks and balances

Schiff said Sunday he plans to meet with the FBI to hear concerns about a Democratic rebuttal to a Republican intelligence memo alleging FBI abuses of its surveillance authority.

"We're going to sit down with the FBI and go through any concerns that they have, and any legitimate concerns over sources and methods, we will redact," Schiff told CBS's "Face the Nation."

Also related to the Russia investigations, it is possible that Steve Bannon will return to the Hill to face questions before the House Intelligence Committee for a second time. The committee pushed back the deadline for his subpoena once again into next week as they negotiate the scope of the questions that Bannon will answer about the transition and his time in the White House.

Trump sends his fiscal 2019 budget request to Congress this week. Because Capitol Hill just passed a two-year budget deal, Trump's budget is expected to be largely ignored, but it will still be watched closely as a sign of his priorities.

Both the House and Senate will hold hearings this week to examine the President's proposed budget request for Fiscal Year 2019.

Congressional appropriators will continue their work readying an omnibus spending bill that is the result of the budget deal this week and should be voted on in each chamber by March 23. These are the fine point details of agency-by-agency spending needs.

In a possible sign of their constructive and possibly warming relationship, Senate Democratic Leader Chuck Schumer and McConnell -- who cut the big budget deal last week -- will appear on stage together at the McConnell Center at the University of Louisville on Monday at 9 a.m. ET.

The House Subcommittee on Emerging Threats and Capabilities will examine the 2019 budget request for U.S. Special Operation Forces and Command Thursday.