Hurricane Florence is about to flood Georgetown, South Carolina. They don't know how bad it will be 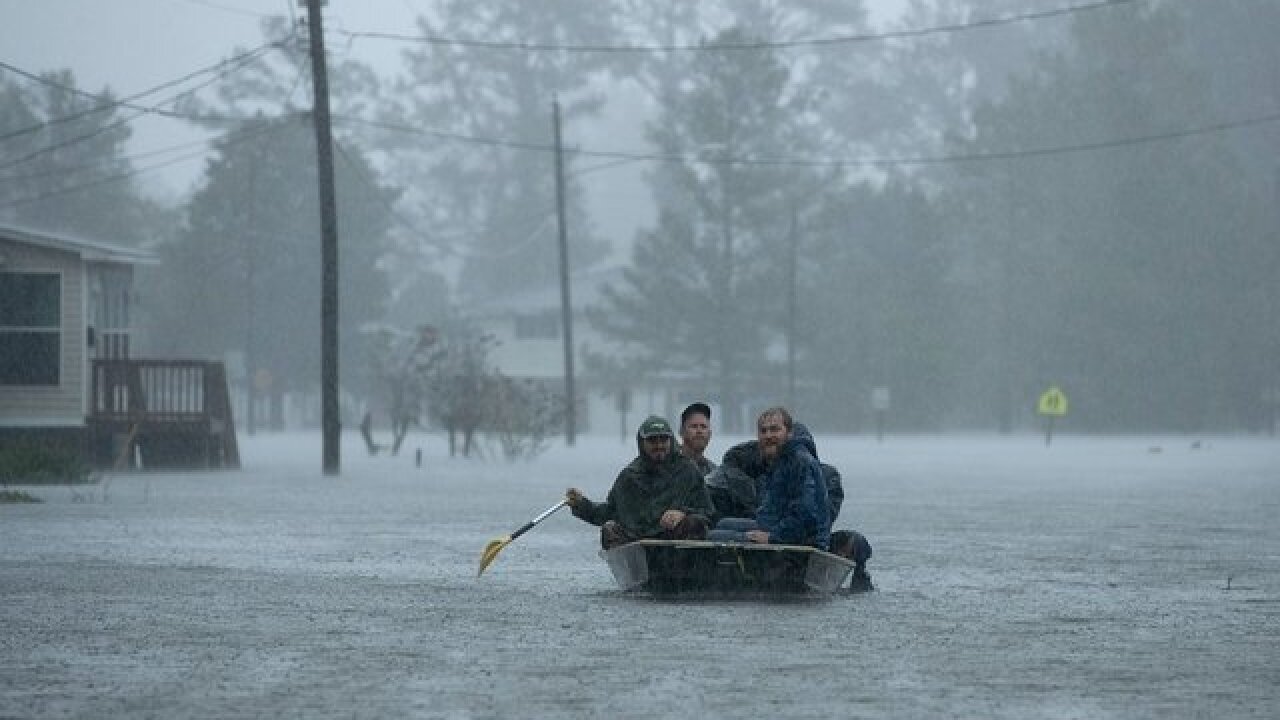 Authorities in Georgetown County, South Carolina, are urging thousands of people to evacuate ahead of historic flooding in an area where multiple swollen rivers converge.

The county escaped the brunt of Hurricane Florence's wind, but it sits at the mouths of the Waccamaw, Great Pee Dee and Sampit rivers.

Parts of Georgetown County will see at least 10 feet of flooding, forecasters say. Key words: at least. The flooding is expected to begin Tuesday and will last through the weekend.

"The Pee Dee River is the big elephant in the room," Georgetown County Administrator Sal Hemingway said in a press conference Thursday.

The Great Pee Dee and the larger Waccamaw River have already swollen to record levels upstream -- as demonstrated by the flooding 40 miles north in and around Conway, where the Waccamaw is still rising -- and that water is now traveling downstream at historic levels.

There is no benchmark for comparison, not even the destruction wrought by Hurricane Matthew last year, Hemingway said.

Making matters worse is the potential for tides to exacerbate floodwater levels. Normally, from low tide to high tide, Georgetown sees about a 3-foot difference in the water level where the Great Pee Dee River meets Winyah Bay.

Monday night's full moon means high tides will be even higher. If the rivers hit peak crest during a high tide, flooding will spread even farther into the city.

How the city is preparing

The rainfall that Florence dumped on North Carolina has been crawling downriver for more than two weeks. It's now set to inundate the homes and businesses belonging to Georgetown County's more than 61,000 people -- almost 8,000 of whom are being urged to evacuate.

A significant portion of the city is expected to be underwater.

Critical infrastructure is already being prepared and hardened. Along Highway 17, which connects Georgetown to the nearby South Carolina coast and its beaches, flood barriers are being erected.

Officials worry that the flooding could wash away the portion of the highway that links the bridges spanning the Great Pee Dee and Waccamaw rivers.

As a precaution, the South Carolina National Guard is building a floating ribbon bridge, capable of carrying heavy equipment, across the Waccamaw River.

All 19 Georgetown County schools were closed Monday until further notice. Several are "at risk for substantial flooding damage," county officials say. Two of them, Georgetown High School and Waccamaw Middle School, have opened as pet-friendly shelters.

The Georgetown County Water and Sewer District is also scrambling to prepare. The Waccamaw River, which supplies drinking water for the county, will soon contain dangerous pollutants from the floodwater.

Ray Gagnon, executive director of the water district, told reporters that the district is working to protect all of its facilities in the "inundation zone," and preparing other sources of water -- including aquifers, recovery wells, groundwater wells and the county's interconnect with the nearby Grand Strand Water and Sewer Authority.

Sandbags are also being distributed -- up to 10 per household -- but the county warned on its Facebook page, "Keep in mind that sandbags will not seal out water."

Thomas Cafe sits on Front Street, the main drag in Georgetown. It looks almost exactly like did it did when it opened in 1929.

The menu and the booths are original, as is most of the decor -- even the refrigerator.

In its 89-year history, it has never flooded before. Matthew's floodwater reached only to its back door.

"We're expected to get water in this time," said Olivia Goins, who has waited tables there for five years.

On Tuesday, the cafe won't be serving its famous $10.95 shrimp and grits. It will close for one of the few times in its history so employees can remove the fridges and freezers ahead of the flood.

Like many residents and business owners in the city, they're trying to prepare in any way they can, but in the end, there's not much they can do.

There's nothing anyone can really do; the floodwater is coming and, by all forecasts, will be catastrophic. Goins and the city of Georgetown are stuck playing the waiting game.