Hundreds of separated children not reunited amid slow progress 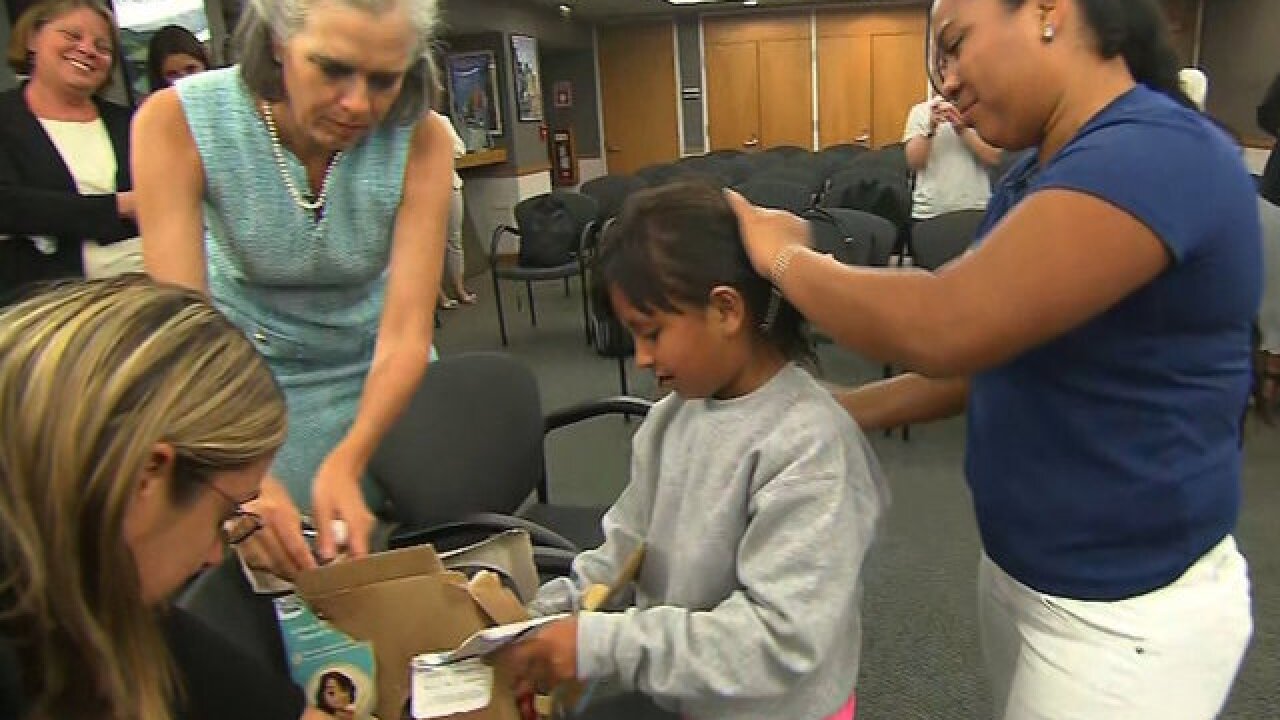 © 2018 Cable News Network, Inc.
CNN Exclusive
<p>Angelica Gonzalez-Garcia and her daughter fled Guatemala for the United States citing abuse, domestic violence and discrimination in their homeland - they are finally being reunited this afternoon.</p>

There are still roughly 700 children who were separated from their parents at the border and have not been reunified with those parents by the Trump administration, as new court filings reveal the slow pace of reuniting the trickiest family separation cases.

That figure includes more than 40 children who are 4 years old and younger.

While the administration maintains there is a suitable explanation for each of those cases, the filing makes clear that a large share of those children remain separated because their parents were deported without them.

To date, 1,923 out of 2,654 children identified as separated from their parents have been reunified, the administration says.

The number was revealed in a weekly status report on Thursday that the government is required to file as part of an ongoing lawsuit over the administration's separation of immigrant families at the border. A federal judge has ordered the administration to reunite all the families, as long as they are not ineligible due to safety concerns or other excluding factors.

"There's real progress being made and real effort being made in some of these home countries, Guatemala and Honduras," Sabraw said. "(It) looks or is very encouraging, at least, that everything is being done to locate as many of these parents as can be. So the report would indicate to the court that the efforts on the ground are productive and certainly heading in the right direction."

There are 528 children in government custody who have not been reunited with a parent, including 23 who are under the age of 5, the filing said. For the first time, the administration also made clear how many children were not reunited with their parent but were otherwise released from detention: an additional 203, including 19 under the age of 5.

Those children may have been released to a relative or family friend or may have turned 18 while in custody. It is possible some have since reunited with a parent outside of government custody, but it's not known how many have been able to do so.

In the joint court filing with the American Civil Liberties Union, which filed the original lawsuit on behalf of separated parents, it is apparent that the two sides still disagree over how the efforts to reunify are going. While the numbers have improved slightly since last week's update, the going remains slow.

The filing also makes clear that the administration's accounting methods are painting a rosier picture of the pace of reunification than the ACLU's.

According to the list given to the ACLU by the government, 412 parents were deported without their children -- a group that has remained the most difficult problem in the reunification process. That tabulation makes the number seem smaller by only counting the children still in custody with deported parents, rather than the total number of parents who were deported.

There is also a dispute about how many parents have been actually found.

The administration said only four of its total have not been "contacted" -- but the ACLU says only 231 parents were "reached," either by phone or in person. Of those, 183 have indicated what they want to do going forward, either reuniting with their child or allowing them to continue to seek the ability to stay in the US, and 10 have been reunited with their parents in their home country.

In court, Justice Department attorneys attributed the discrepancies to out-of-date information or children being released from government custody. Administration attorney Scott Stewart said roughly two dozen children had been sent back to their home countries to be with their parents.

The process is complicated on a number of levels. The information for tracking down parents and children is still raw and not always reliable, the ACLU says. Also because of two separate lawsuits, the attorneys must make sure the parents' wishes and the children's wishes about their future are aligned. Of the handful that have been resolved so far, the majority have opted to be reunited in their home countries, with a much smaller group electing to remain separated.

Parents say they were coerced

Several key issues that came up in court last week remain unresolved: whether any parents who were deported should be brought back to the US as part of the reunification process, and next steps for children to continue with their asylum claims after reuniting with parents in the US.

Without going into detail, the ACLU noted its partners are also encountering parents who were deported who said they were coerced into agreeing to their own deportation.

That topic was the focus of a lengthy complaint also filed Thursday with the Department of Homeland Security's watchdogs.

Filed by two immigration advocacy and legal groups, the documents describe widespread instances of separated parents being coerced into signing forms agreeing to their deportation, verbal abuse and detention conditions repeatedly described as worse than being treated like a dog.

Calling the situation a "really ugly reality of coercion and intimidation," American Immigration Lawyers Association Executive Director Ben Johnson said in a call with reporters that the facts are far graver than merely separating families.

"This really is a systematic and intentional effort to take children away from their parents and hold them hostage in order to sabotage their right to seek asylum in the United States and to then use them as a threat to (others) who are contemplating coming to the United States to apply for asylum," Johnson said. "This kind of abuse is only possible in our immigration system because it just does not have the adequate protections to guard against this kind of conduct and abuse."

Department officials did not respond to requests for comment on the allegations, citing ongoing litigation.

Besides deportation, other reasons kids weren't reunited include parents declining reunification, red flags for safety or parentage, and parents who are in criminal custody. Additionally, a few dozen were determined to have not been separated in the first place.