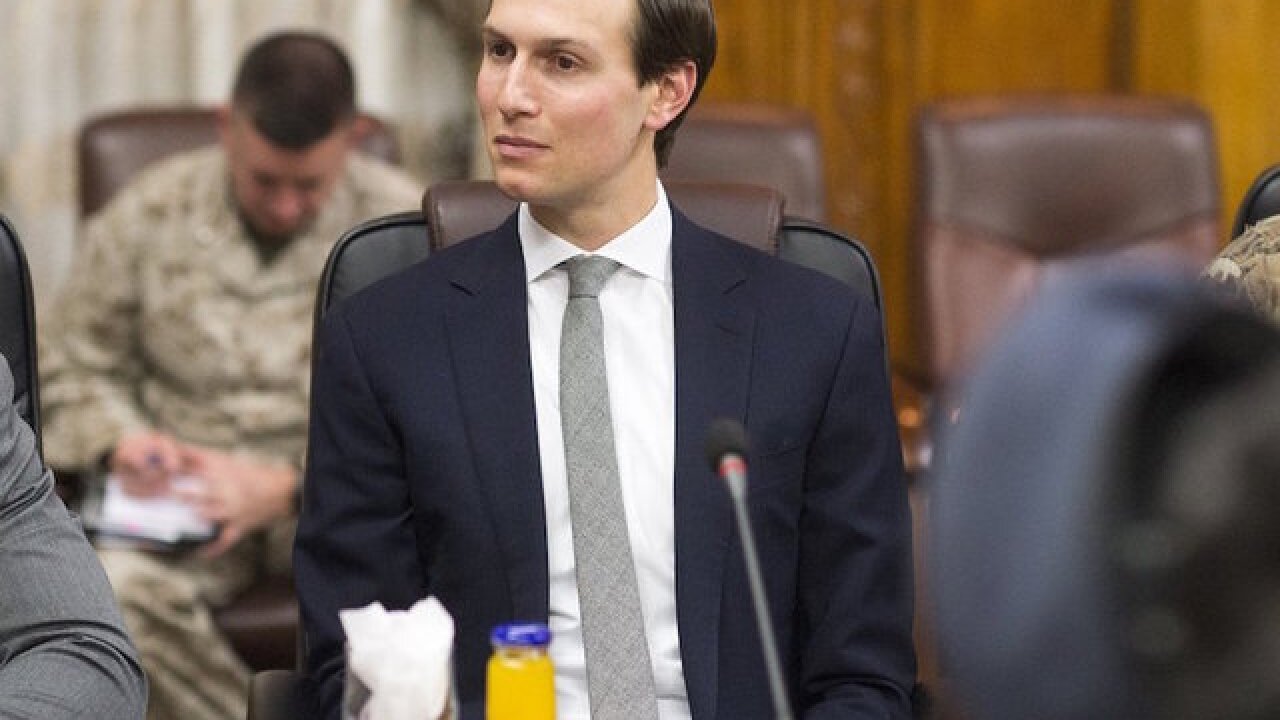 Members of the House intelligence committee's Russia investigation are gearing up for Tuesday's testimony from top White House adviser and President Donald Trump's son-in-law Jared Kushner -- with plans to pry into his public statement.

The intensity could vary starkly from Kushner's appearance before the Senate's Russia investigators just a day earlier, with House Democrats saying they plan to probe for holes in Kushner's 11-page public statement and also pry into his role. Kushner's testimony Tuesday is behind closed doors.

And, in a twist, House intelligence committee Chairman Devin Nunes -- who temporarily stepped aside from running the House Russia probe in April -- said he might show up to Tuesday's interview of Kushner.

"I don't know, I haven't decided yet," Nunes said Monday.

Rep. Mike Conaway, the leader of the House Russia investigation who took over the reins from Nunes, said that he's read through Kushner's public statement and suspects that will guide most of the questioning.

"That seems to be a pretty good narrative of what folks would want to talk about," Conaway said.

On Monday, Kushner released a lengthy statement ahead of his appearances, saying flatly that he did not collude with anyone from Russia or any other foreign government and has not used Russian money to finance his real estate deals.

"I did not collude, nor know of anyone else in the campaign who colluded, with any foreign government," Kushner said in his written statement. "I had no improper contacts. I have not relied on Russian funds to finance my business activities in the private sector. I have tried to be fully transparent with regard to the filing of my SF-86 form, above and beyond what is required. Hopefully, this puts these matters to rest."

The pair of appearances by Kushner -- both in private -- marks an escalation for the congressional probes, spurred in large part by the revelation by Donald Trump Jr. that he, Kushner and former campaign chairman Paul Manafort met privately with a Russian lawyer who reportedly planned to deliver dirt on Hillary Clinton from the Kremlin.

In Monday's interview, a small group of Senate intelligence committee staff interviewed Kushner and his lawyers in what will likely be a preliminary interview before a later query from committee members themselves. But he's likely to face a tougher audience Tuesday in the House from members of Congress.

Kushner was already on Hill investigators' radars following reports by The Washington Post and The New York Times in May that he attempted to build a backchannel line of communications to Russian President Vladimir Putin and also met with the head of Russia's state-run development bank during the December transition period.

"We have a lot of ground to cover," said Rep. Adam Schiff, the top Democrat on the House intelligence committee, Sunday on CBS' "Face the Nation."

Kushner, in his statement, denied that he was attempting to set up a backchannel to the Kremlin, said that he did not read the full contents of the Trump Jr. email with publicist Rob Goldstone's promise of dirt on Hillary Clinton from the Kremlin and added that as late as last November, he still could not recall name of Russia's ambassador to the US, Sergey Kislyak.

But Democrats say they remain skeptical that Kushner is revealing everything he knows.

"The pattern has been they only disclose what they absolutely have to when confronted by overwhelming evidence," said Rep. Eric Swalwell, a California Democrat on the House investigation. "We're going to continue to corroborate or discredit what he has said, but we're not going to just take his word for it because we haven't been able to take anyone in the family's word for it."

Swalwell said in an interview on CNN's "Erin Burnett OutFront" Monday night that he doesn't think Kushner's behavior can be attributed to inexperience in politics.

"I don't think he's a novice at all," Swalwell said of Kushner. "He seems like he knew exactly what he was doing."

Committee sources said Monday that most if not all of the House Democrats on the investigation will be in the room to pepper Kushner with questions. But on the Republican side, Rep. Trey Gowdy and Rep. Tom Rooney, who are co-leading the House probe with Conaway, will lead the questioning for the Republicans.

Rep. Joaquin Castro, a Texas Democrat, said he wants answers on the Trump campaign's digital operation, which Kushner oversaw. Democratic operatives have theorized that the Trump campaign could have coordinated with Russian operatives to boost anti-Clinton stories -- although no evidence has emerged to support that theory.

"Who exactly was in control of it? Who all was coordinating with whom?" Castro said. "I intend to ask questions about everybody that was involved in the data operation."

House and Senate Democrats on the Russia investigations have taken an interest in Facebook recently, saying they want to see data on fake news posts that went viral during the campaign. And Sen. Mark Warner, the top Democrat on the Senate intelligence committee, has also expressed an interest in Cambridge Analytica, the Republican firm that created elaborate voter-targeting models that were credited with helping the Trump campaign focus heavily in Rust Belt states.

The Trump campaign's digital director, Brad Parscale, has received an invitation to testify before the House intelligence committee, although a date has not been set yet.

Trump, meanwhile, and the White House staff, launched into an attack on Schiff Monday, ahead of Kushner's appearance before the House investigation. The president called Schiff "sleazy" and the White House released a report arguing that Schiff wasn't doing his job because he's spent more than 14 hours on television this year.

But Schiff seems to have gotten a boost from the Trump insult -- his response on Twitter, that Trump's "comments and actions are beneath the dignity of the office" -- was retweeted 30,000 times and liked 84,000 times as of late Monday.