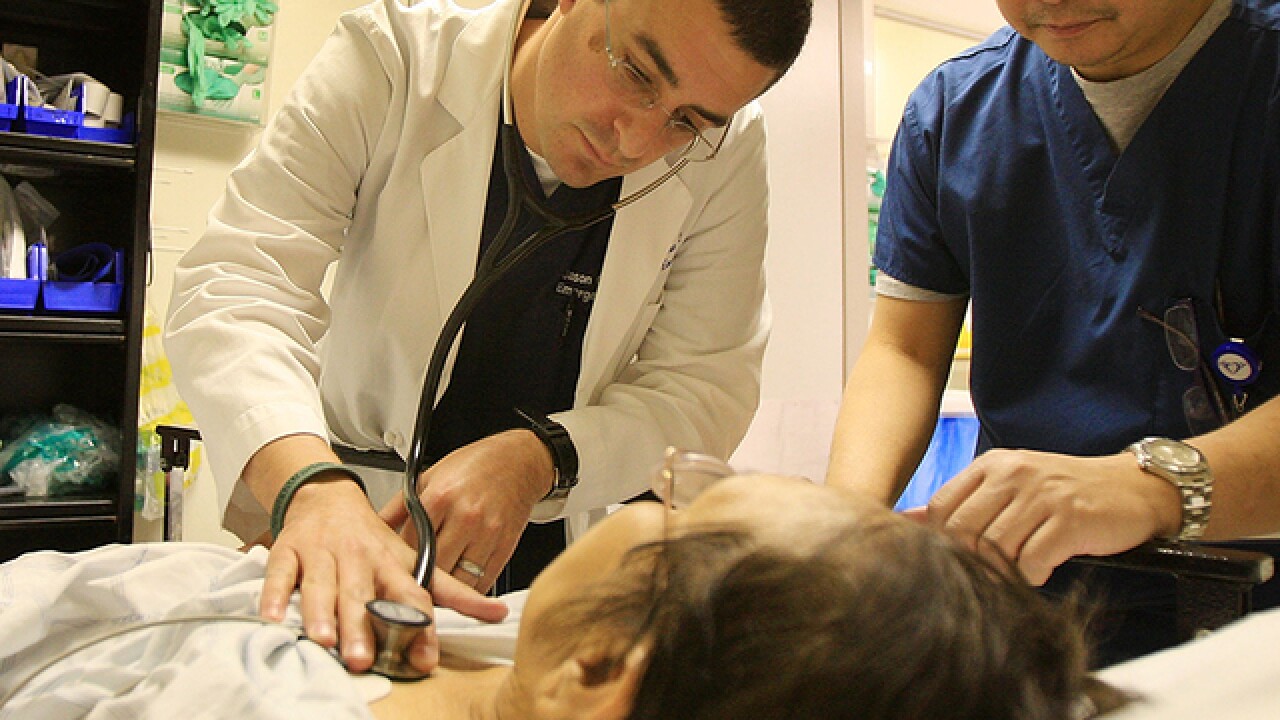 Copyright Getty Images
David McNew
<p>A doctor and nurse care for a patient in the ER.</p>

NEW YORK (CNNMoney) -- They are just three little words — health savings accounts — but they are generating a lot of buzz as Republicans contemplate plans to repeal and replace the Affordable Care Act.

Based on a long-held conservative view that consumers should be more responsible for their health care spending, expanding the use of HSAs is part of almost every GOP replacement plan under consideration on Capitol Hill.

Here's the theory behind HSAs: Making consumers bear a bigger upfront share of medical care — while making it easier to save money tax-free for those costs — will result in more judicious use of the health system that could ultimately slow rising costs.

While the details of the current proposals differ, they all generally seek to allow larger tax-free contributions to the accounts and greater flexibility on the types of medical services for which those funds can be used. Some include tax credit subsidies to help fund the accounts.

Supporters say premiums for the insurance linked to an HSA are lower, and they like HSAs' trifecta of tax savings — no taxes on contributions, the growth of the funds in the account or on their withdrawal if spent on medical care. But skeptics note the tax break benefits wealthy people more than those with lower incomes.

Still, expect to hear a lot more about HSAs in the coming months. Here's what you need to know:

Q: What are HSAs?

HSAs currently must be paired with qualifying health insurance plans that have annual deductibles of at least $1,300 for individuals or $2,600 for a family, although surveys show average deductibles are generally higher than those minimums.

Unlike some other types of insurance, the consumer pays the full cost of most doctor visits, drugs or hospital stays until the deductible is met. There are some exceptions for services deemed "preventive," such as certain vaccines, prescription medications or cancer screenings.

To pay for those deductibles and other medical costs, consumers can make tax-free contributions to the HSA account. This year, that allowable amount maxes out at $3,400 for individuals or $6,750 for families, and unused portions can roll over to the following year.

The amounts in the HSA grow tax-free, similar to retirement accounts. Some employers who offer HSA-coupled insurance contribute to the accounts on behalf of their employees.

Money in the funds moves with the policyholders, even if they change jobs or insurers, similar to how workers can take their 401(k) retirement fund to a new employer. Still, polls have shown that most Americans already have little or no money saved for an emergency, so skeptics say they are not likely to embrace medical accounts.

"Americans who are struggling to afford health insurance right now don't have the money to set aside," said Maura Calsyn, managing director of health policy at the Center for American Progress. "Raising the limits is essentially just providing high-income individuals with a greater tax benefit and doesn't do anything to increase coverage."

Critics also point out that older or sicker consumers could blow through their entire fund every year and never accumulate any savings.

Q: How would they change under GOP proposals?

Several proposals — including the Better Way white paper authored by House Speaker Paul Ryan, would increase HSA contribution limits. Ryan's plan would allow the tax-free contributions to total as much as the insurance plan's annual deductible and out-of-pocket maximum. For families, that could be more than $14,000 a year.

Sen. Rand Paul's, Obamacare Replacement Act would get rid of the upper limit on contributions entirely. It would also allow the accounts to be coupled with any type of insurance, not just high-deductible plans.

Currently, money in the accounts can be used only for certain health costs, such as deductibles, copayments for doctor visits, hospital care and other out-of-pocket costs. The funds cannot be used to pay premiums on health insurance plans.

Both the Ryan proposal and one from Rep. Tom Price, the physician nominated to head the Department of Health and Human Services, would allow the funds to be used to pay fees directly to doctors, for "concierge care," which refers to arrangements in which consumers pay annual or monthly fees for special coverage that provides quicker access, longer visits or, in some cases, all primary care services.

Christopher Condeluci, an attorney and former counsel to the Senate Finance Committee, said Republicans might seek to loosen the rules around what services are exempt from the deductible, potentially to incorporate medical care important to people with chronic illnesses, such as annual eye exams for people with diabetes.

"That would recognize that there are individuals who are high medical utilizers and high-deductible plans just are not appealing to them ... unless you can change the definition to make them more appealing," he said.

Q: How common are HSAs?

An estimated 26 million Americans — policyholders and their dependents — are covered by some type of HSA-eligible plan. That's a small share of the overall 178 million who have coverage through their jobs or purchased on their own, but it has steadily grown since HSAs first became available in 2003.

Among employers who offered insurance last year, about 24% had HSA-eligible plans, with average annual deductibles of $2,295 for single policies and $4,364 for families, according a survey by the Kaiser Family Foundation. (KHN is an editorially independent program of the foundation.)

Paul Fronstin, with the Employee Benefit Research Institute, noted that the slow ramp up is similar to most trends in health benefits. Now, he said, with the GOP focus on changing the health system, "we could see an acceleration of that trend."

Q: How much do they cost and what are the advantages?

Eligible health plans may have lower premiums than other types of insurance because of their higher deductibles. Policy experts and economists say the accounts might make people better consumers of health care because they have more "skin in the game" and are more likely to shop for the best prices on drugs, medical care or hospitalizations — and avoid running to the doctor with the sniffles.

"It makes people more conscious that the health care they are getting is being paid for with real dollars and not coming out of the ether," said Joe Antos with the American Enterprise Institute.

Q: What are the disadvantages?

For one thing, it isn't easy for people to comparison shop on the prices for medical care. And, consumers don't always make good choices. Among those with HSAs, overall spending on medical care does indeed go down, Fronstin and other researchers have reported.

But they also uncovered a disturbing trend: At least in the first year or two, policyholders cut back on everything, including high-value services they should really seek. ER visits go up. And many even forego screening exams — such as mammograms or other cancer tests — even though they are specifically excluded from the deductible and are therefore "free" to the consumer. Bypassing preventive or other care could lead to higher costs in the future.