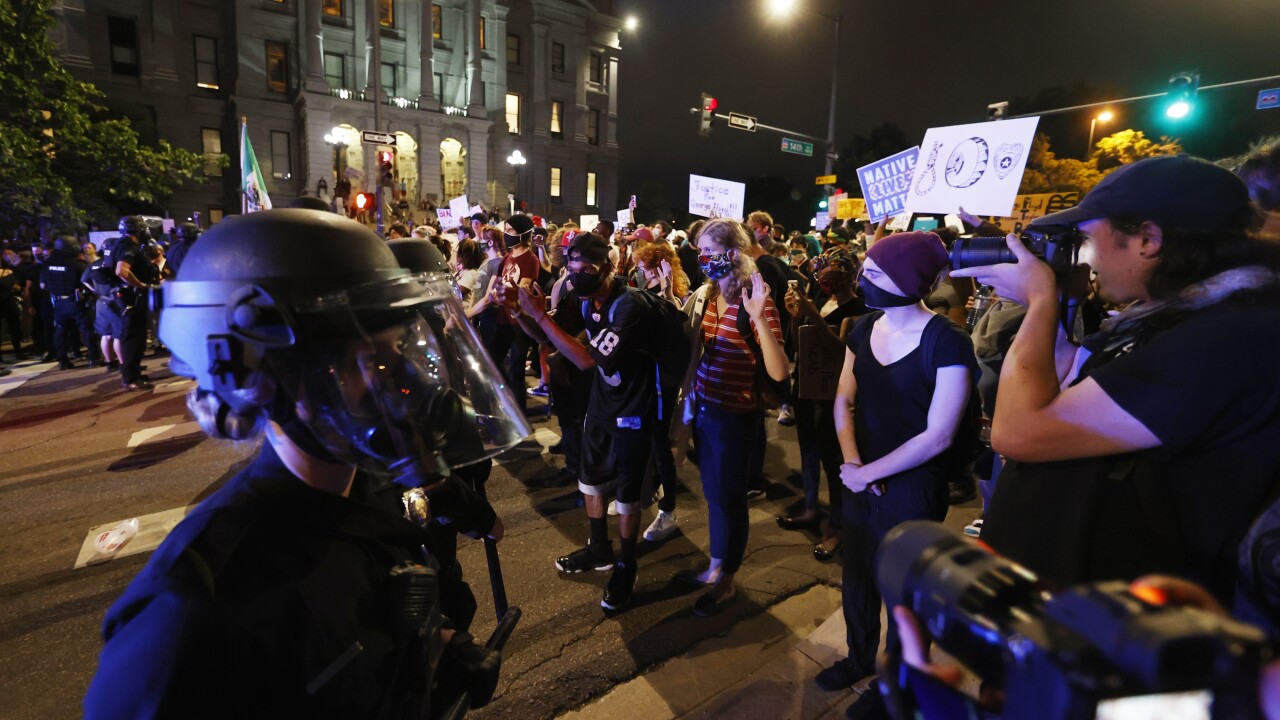 Copyright 2020 The Associated Press. All rights reserved.
David Zalubowski/AP
Denver police face off with protesters outside the State Capitol over the Monday death of George Floyd, a handcuffed black man in police custody in Minneapolis, Thursday, May 28, 2020, in Denver. (AP Photo/David Zalubowski)

Demonstrations played out across the country on Thursday, often echoing the same themes of “Black Lives Matter” and “No Justice, No Peace” following Monday’s death of George Floyd, a black Minnesota man who died in police custody.

In cities big and small across the United States, people aggravated with the criminal justice system aired their grievances. Many protests remained nonviolent, even as protesters claimed that peace was not an option until justice in their eyes is served.

The justice that protesters sought did not come on Thursday.

Three days after Floyd’s death, federal and state investigators said now is not the time to press charges against the officers who held Floyd, despite calls from the mayor of Minneapolis, Floyd's brother, and others.

The incident has been seen by millions following a now viral video circulating social media.

When asked why the video was not enough evidence to produce probable cause for a criminal charge against, Chauvin Hennepin County Attorney Michael Freeman told reporters, “There is other evidence that doesn’t support a criminal charge.”

Within hours, police and protesters clashed in dozens of cities.

In Columbus, reporters for WSYX-TV reported that protesters shattered windows of the Ohio Capitol, as well as the Ohio Theater. The station said a news vehicle was also damaged amid the protests.

In Denver, police confirmed that several gun shots were fired amid protests. Also, a protester was run over by a car that sped through demonstrations.

In Louisville, police there fired tear gas at protesters late on Thursday.

Similar scenes played out in other cities across the US.

"I can’t stand back & watch this happen to a great American City, Minneapolis," Trump said. "A total lack of leadership. Either the very weak Radical Left Mayor, Jacob Frey, get his act together and bring the City under control, or I will send in the National Guard & get the job done right.

"These THUGS are dishonoring the memory of George Floyd, and I won’t let that happen. Just spoke to Governor Tim Walz and told him that the Military is with him all the way. Any difficulty and we will assume control but, when the looting starts, the shooting starts. Thank you!"

In a CNN interview, Philonise Floyd, George Floyd’s brother called for peace, but added, “I know firing them that was the first step, but they can go in another county and get a job. But what I'm seeking is that because they executed my brother. I want justice. You know, I want an arrest for all four of those officers tonight. A murder conviction for all four of those officers.”

“We're all angry, but we use our anger in a different way,” Sharpton said. “But when I got here, someone said to me, are you going to address the violence? The violence I'm addressing is how a man could hold a man down with a knee on his neck for nine minutes. That's when the violence started."

Here are some of the scenes from around the US:

Flags on fire outside the @OhioStatehouse tonight. We have team coverage of the protests across multiple @10TV platforms. #10TV pic.twitter.com/SE6YBk2esf

(Caution: Graphic) A car caught in the middle of the protests near the Capitol is seen turning around and hitting a protester before leaving the scene. We’re still working to get information. https://t.co/SOcaWTWx5Q (video courtesy @bellers03 ) pic.twitter.com/6DB9hVKXP3