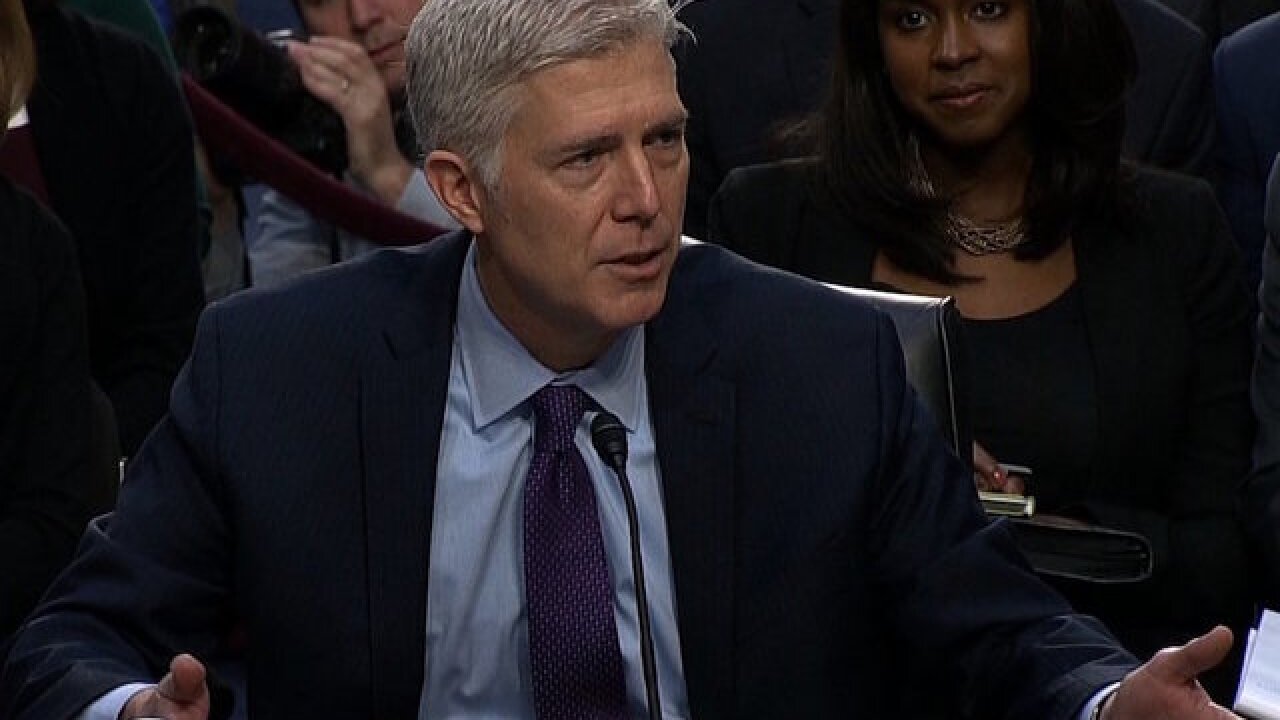 Now that Democrats have the votes to sustain a filibuster, moderate Republican senators are preparing themselves to vote for the controversial rule change known as the "nuclear option" in order to get Neil Gorsuch confirmed to the Supreme Court. It's a vote they say they don't want to make, but feel that Democrats are forcing their hand.

Sen. Susan Collins of Maine, who previously stopped short of saying how she would vote on the nuclear option, argued that both parties "will rue the day" that led to the likely rule change.

"If it's necessary in order to get him confirmed, I may have to vote that way, but I certainly don't want to," Collins told reporters Monday night.

The nuclear option would lower the threshold for breaking a filibuster of a Supreme Court nominee from 60 to 51, meaning the majority party could approve a nominee on a party line vote.

Democrats and some Republicans acknowledge it will drastically change the Senate into a more partisan institution, even though Democrats themselves used the nuclear option in 2013 over the protests of Republicans to make a similar rule change for all other presidential nominations.

By permanently nixing the filibuster for Supreme Court nominees in the future, critics say it will give the party in power all the leverage and eliminate the Senate's tradition of needing at least some bipartisanship to advance nominees.

Collins said she was "very troubled" that Democrats "put us in the situation" and that they'll regret it one day because the rule change will make it easier for presidents to get more ideological justices approved for the Supreme Court down the road.

Senate Majority Leader Mitch McConnell, should he proceed to the nuclear option, needs only a simple majority of 51 to vote for a change in rules. It's possible McConnell will have his whole party -- 52 votes -- behind him, but not all Republicans have explicitly said they will back him in the effort.

He can only afford to lose two Republican senators, in which case Vice President Mike Pence would be needed to break a tie. If McConnell loses more than three Republicans, the rule change would not pass.

Collins said Gorsuch deserves to be on the high court and that she's "committed" to making sure he gets confirmed. While she said she worked with Republican Sen. John McCain and Democratic Sen. Joe Manchin to try and hammer out a deal between the two parties, she said it was "not successful" and doubts there is any other option left but to go nuclear.

Other moderate Republicans didn't want to directly confirm they would vote for the rule change, even as they suggested they would if it was needed to get Gorsuch confirmed.

"I'm going to vote for Judge Gorsuch," was all Sen. Lisa Murkowski, R-Alaska, would say when asked if she would vote for the change in rules.

Pressed again if that meant she would vote for the rule change, she would not directly answer the question. "Meaning I'm going to support Judge Gorsuch," Murkowski replied.

When a reporter noted again that she had not actually answered the question, Murkowski responded: "I am working to get Judge Gorsuch confirmed to Supreme Court. That' s my interest," perhaps hinting that she would support nuclear option but perhaps not.

She's not the only Republican declining to directly answer the question.

Senators don't exactly want to go on the record saying they're in support of the rule change -- in fact, many of them personally aren't. Rather, they're only using language saying they'll confirm Gorsuch, one way or the other, and blaming Democrats for putting them in the situation.

Moderates are concerned about how voters in their states -- including Democrats, independents and moderate Republicans -- will react to them voting for the nuclear option.

Sen. Lamar Alexander, R-Tennessee, was equally vague when it came to saying if he would vote for the nuclear option. When a reporter asked why he was being coy, he denied it.

"I'm not being coy at all. Of course, I'm going to vote to confirm Judge Gorsuch. I'm absolutely outraged about what the Democrats are doing," Alexander said, again without directly answering the question. "I will vote to confirm Judge Gorsuch one way or another. One way or the other I'll vote for him. I've said everything I've got to say about it."

Conservative Republican Sen. Roger Wicker of Mississippi was part of bipartisan talks in 2013 to avert the nuclear option when Democrats were considering -- and ultimately used -- the rule change on lower court judges.

On Gorsuch, he says Republicans will do whatever it takes.

"The Senate will confirm Judge Gorsuch despite the filibuster," he told CNN.

Democrats, meanwhile, push back by saying Republicans launched the ultimate filibuster last year by blocking President Barack Obama's pick of Merrick Garland from getting a hearing or committee vote, keeping the seat vacant until a new president was sworn in.

Pressed by reporters on whether he will vote for the nuclear option, Judiciary Chairman Chuck Grassley refused to say yes. But he insisted that he is "going to do whatever it takes" to get Gorsuch on the Supreme Court.